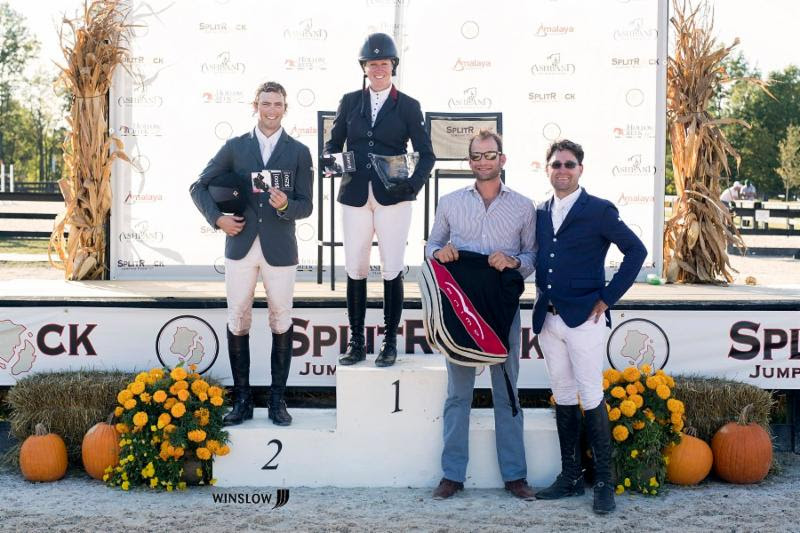 Columbus, Ohio – October 7, 2017 – It was a great day for owner Candy Tribble at the Split Rock Show Jumping Tour’s Columbus International CSI 3*, held at the Brave Horse Show Park in Johnstown, Ohio. Her horses swept the podium positions, finishing first, second and third in the $10,000 Animo 1.40 Meter Youngster Bowl for 7 and 8-Year-Olds

Christine McCrea rode Jarcobond Van Den Oude Eik, an 8-year-old, to the win with two faultless rounds in a time of 39.765 seconds, beating Michael Hutchinson aboard the 7-year-old Fernando, also double clear in 41.647.  Hutchison was also fault free on another 7-year-old, Fantasy BB, in 42.197 seconds.  All of the horses belong to Tribble, making it a clean sweep.

In addition to the prize money for the class, Armando Hassey, owner of Animo USA provided bonuses for the top three placings, $1,000, $500 and $250 respectively, as well as coolers for the top eight.

“This is an unbelievable horse,” said McCrea of her mount.  “I have had him for about a year, and I have really high hopes for him.  I stepped him up last week and did the two star grand prix and he was great, so I thought it would be good to let him jump a little bit lower, calm it down a little bit and make it easy.  This seemed like the perfect class for him, although I did feel like I was cheating a little bit.  But he is an 8-year-old.  I just think I am the lucky one in this relationship.”

Sarah Segal and Zaza Van Paal Z, owned by American Equestrian Associates II LLC, took home the honors in the $10,000 L.V. Harkness 1.35 Prix.  Segal bested a field of 37 starters to claim the win with two clear rounds in a time of 42.091 seconds.  Taylor Land with her Dulrike Utica placed second, the only other rider to achieve double clear rounds, with a final time of 42.653.

Only six horse and rider combinations made it through the course fault free. The time allowed was very tight, as evidenced by the fact that 18 of the original 37 incurred time penalties on course.

“She is only seven,” said Segal after her win.  “We were debating whether to do this class or the Youngster Bowl and decided on this class.  It just seemed like a better fit for her.  She is a naturally fast horse, fast across the ground and in the air, and she is mature for her age.”

The $7,500 HorseFlight 1.30 Meter Junior/Amateur Owner Final belonged to Monica Carrera and her Arena Du Pachis ET with two clear rounds in a time of 31.988 seconds.  A starting field of 29 was whittled down to four after the first round.  The last fence of the course, an oxer with pin stripped rails was the nemesis of many riders and was also the last fence in the jump-off.  Carrera had no trouble with the fence as Arena Du Pachis ET handily cleared it on the way to victory.  Ali Boone and So Elusive were second with no faults in 32.599 seconds.

“Ali was really fast and I was worried that I wouldn’t catch her,” said Carrera.  “But I just went with her. She is really quick and tries her hardest.  She made it happen.”

Bridget Perier, Summit, NJ, and Welfare, owned by Shelanno Farms LLC, won the $7,500 1.20 Meter Junior/Amateur Owner Jumper Final.  The pair bested a strong field of 21 to claim victory with a very speedy jump-off time of 29.32 seconds.  Of the eight other riders who achieved clear rounds to advance to the jump-off, only three were double clear and none of them could break the 30 second mark.

“He is very careful so I know I can book it, and then three strides away just hold his mouth a little and he knows,” said Perier.  “He is a very sensitive horse.  He loves to win.  He is fantastic and I love him.”

The Split Rock Jumping Tour is modeled after successful European shows and gives competitors, sponsors and spectators an “Unparalleled Show Jumping Experience” by changing the way show jumping is presented in the U.S. Split Rock offers competitions at world-class venues along with top prize money, extravagant awards and numerous first-class amenities for riders, owners, sponsors, and spectators, with close attention paid to every detail.

The new facility is a 75-acre premier equestrian showgrounds located minutes outside of Columbus in Johnstown, Ohio. The facility debuted its first hunter/jumper show season in 2016 and operated at capacity. The showgrounds feature a meticulously planned layout with 250 permanent stalls, each measuring 12’x12′, with 16′ aisle ways and a 20′ high ceiling. The expansive property includes multiple rings and riding areas and the Grand Prix Ring, one of two to be used for competition, is 250′ x 350′. All rings have state-of-the-art-footing and the Grand Prix ring features in-ground irrigation. The showgrounds also take advantage of the picturesque Ohio countryside, with expansive tree-lined vistas and water features throughout the grounds.

Online entries can be found at: www.splitrockjumpingtour.com/competitor.