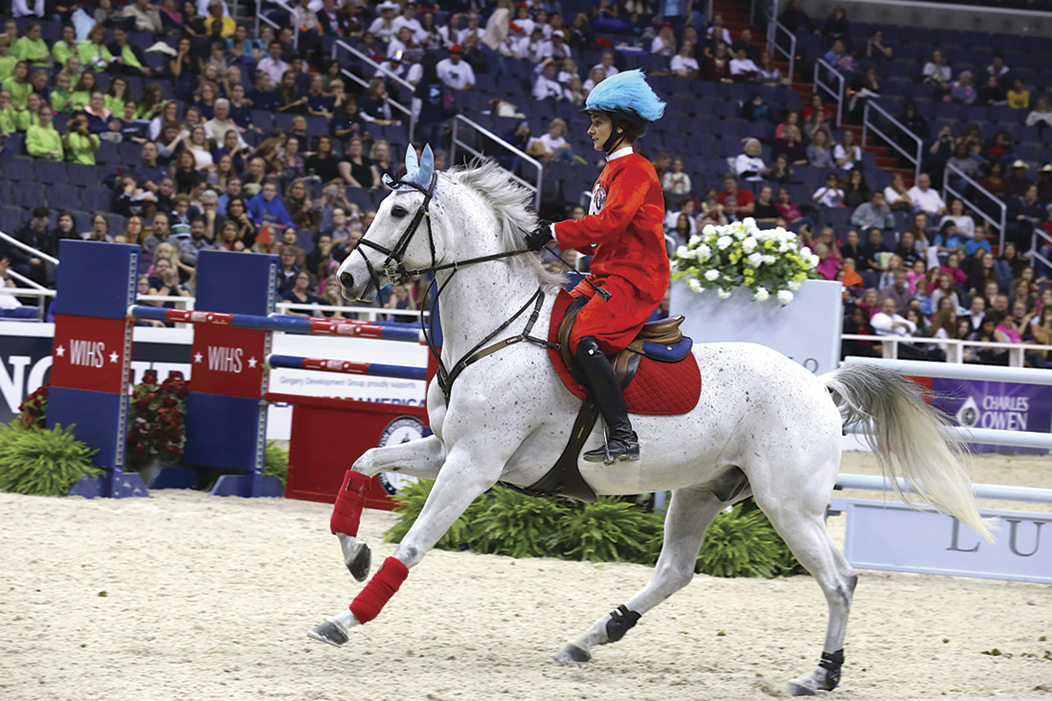 “The Lindsay Maxwell Charitable Fund is proud to support the Washington International Horse Show Equitation Finals,” said Lindsay Maxwell, a successful California-based amateur rider and philanthropist. “The Finals are one of the truly great national-level equestrian competitions and represent the culmination of years of dedication, countless hours of practice, and are definitely a highlight of a junior rider’s career.”

Do not wait! Get your tickets to the 59th annual Washington International Horse Show now for a week sure to be filled with exciting sport and entertainment for all!

The Washington International Horse Show returns to the heart of Washington, D.C. on October 24-29, 2017. The event attracts more than 26,000 spectators annually as riders compete for prize money totaling more than half a million dollars. For a complete schedule of events and more information, please visit www.wihs.org

More than just a horse show, the Washington International Horse Show (WIHS) is a week filled with entertainment and activities for horse lovers and those with no prior exposure to the sport. This year, from October 24-29, the world’s top riders will gather at the Capital One Arena in the heart of Washington, D.C. for one of North America’s most beloved equestrian events. HERE ARE FIVE REASONS WIHS IS A SHOW YOU CANNOT MISS!

1. Horses competing in costume? Shetland ponies steeplechasing? Group contests with your fellow horse-loving friends? You can find all that and more at WIHS Barn Night, held on Thursday, October 26, and presented by U.S. Equestrian, Enjoy Yums, The Equiery, The Clothes Horse and United Metro Golf Cart. The feature class is the always-engaging $35,000 International Jumper Accumulator, presented by Equestrian Sport Productions. Competitors get creative as they dress themselves and their horses in costume for the class. Where else can you see a horse jumping as a cheetah or a full-grown man competing dressed as a baby girl? Prior to the Costume Class, the hilarious WIHS Shetland Pony Steeplechase Championship Series, presented by Charles Owen, will take place. Barn Night is always a fan favorite. Young riders, barn mates, and horse lovers can attend in groups for the chance to win prizes and enjoy a fun night out. This year’s contest theme is “Equestrians Around the World.” A few of the fabulous prizes include a group riding clinic with Laura Graves, presented by BarnManager, a custom stable drape set from The Clothes Horse, and $2,500 in Dover Saddlery gift certificates. And the fun doesn’t stop there – top riders will be on hand to sign autographs for spectators to take home.

Winner of last year’s Jumper Accumulator, Catherine Tyree, describes the atmosphere on Barn Night, “It is always really fun to do the costume class. We all secretly have a lot of fun with it. The crowd creates a really special atmosphere for all of us. It is not something we see a lot in the States so it’s really special to compete at Washington with a crowd like that.”

2. The pinnacle of WIHS is the $130,000 Longines FEI World CupTM Jumping Washington, presented by Events DC, for the President’s Cup held on Saturday, October 28. The event has been selected as one of only seven Longines FEI World CupTM Jumping classes held in the United States as part the North American League East. It serves as an important qualifier for the Longines FEI World CupTM Jumping Final, to take place in Paris, France, next April. Top riders from around the world will vie for the highly respected President’s Cup title. Over the years, the class has drawn spectators like First Lady Nancy Reagan, President John F. Kennedy, and First Lady Jackie Kennedy. Past winners include McLain Ward (USA), who has won the class an impressive four times and is currently ranked #3 in the world, and Kent Farrington (USA), the number one ranked rider in the world. Last year’s winners, Lauren Hough and Ohlala, have been on fire during the 2017 season. The pair has notched several key victories and been a part of a winning Nations’ Cup team. Hough looks forward to returning to Washington, D.C. to defend her title!

3. Children and families rejoice! Kids’ Day, presented by Discovery Communications & EQUUS Foundation, returns to WIHS on Saturday, October 28. This free, fun, family-friendly event gives the local community a chance to interact with and learn about horses. Activities take place inside the Capital One Arena and on a closed street in front of the Hotel Monaco (700 F Street NW) as children participate in a horseless horse show, horseshoe painting, pony brushing lessons, pony rides, and the Horse Stars Hall of Fame interactive exhibit (just to name a few of the fun and educational expositions offered). Giveaways from Georgetown Cupcakes will also be up for grabs.

Junior star and leader of the WIHS Equitation standings, Taylor St. Jacques, recalls attending Kids’ Day when she was young. “My earliest memory of Washington would be when I was little and went to watch. I remember they would bring the mini ponies in, close off the street, have a pony kissing booth, pony rides, and a horseless horse show. I absolutely loved it!” she said.

5. The WIHS Equitation Final returns with a new title sponsor – the Lindsay Maxwell Charitable Fund. The Hunter Phase takes place on Friday, October 27, and the class will conclude on Saturday, October 28, with both the Jumper Phase and the Final Work-Off. Junior equitation riders spend the entire year trying to qualify for the prestigious event, which invites the nation’s top 40 based off a points system. Previous winners include the likes of two-time Olympic gold medalist McLain Ward (1993), Olympic silver medalist Kent Farrington (1999), and recent Nations’ Cup winner Lillie Keenan (2010). Many winners of the class embark on careers as riders or trainers and go on to represent the United States in the highest level of international competition.

Get Ready to Show With Springtime Supplements