Home Blogs Barn Lounge Amid Chaos and Flames, a Community Bands Together 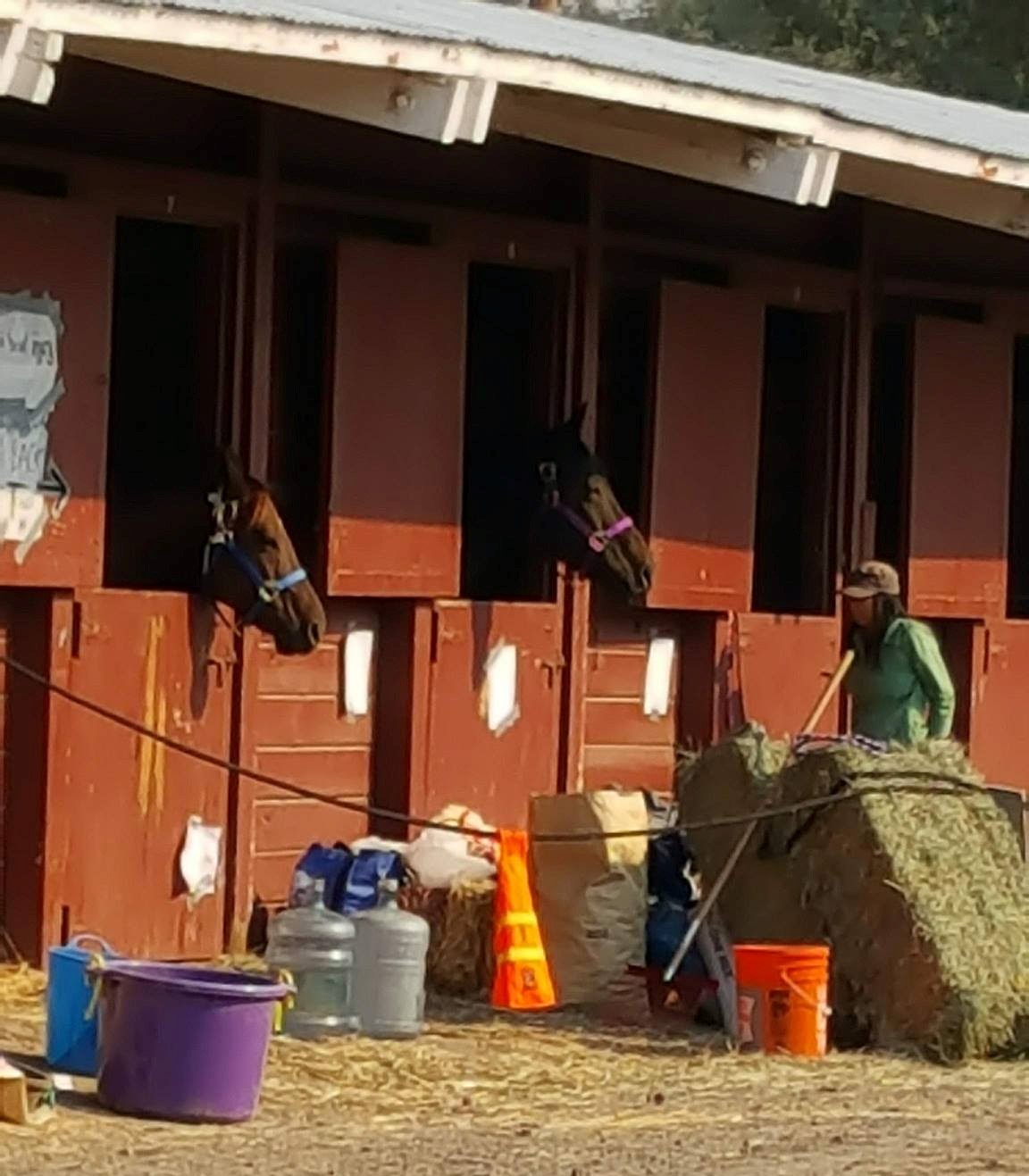 Above: Rescued horses at the Sonoma County Fairgrounds. Photo Courtesy of Annie Zurth.

The devastating fires in Northern California have been focus of national news since they began late on Sunday, October 8, fueled by dry conditions and high winds.  More than 20,000 people have been evacuated and sadly, 31 deaths have been reported as of October 12, with 400 people still reported missing.

The fires in Napa and Sonoma counties have affected thousands of horses, but the camaraderie of the Bay Area equine community has never been more evident than during this time of tragedy.  It seems like everyone has sprung into action.  Social media has been inundated with people who are volunteering to risk their own lives to help horses by hauling them to safety, donating their time at evacuation barns to take care of the animals there, and giving supplies to horses who need them.

Petaluma trainer Nina Alario, of Estancia Farms, posted this on her Facebook page the evening of Monday, October 9: “What happened today in Northern California was not normal. Tragedy and chaos struck and the Nor Cal horse community rallied.  Our friends arrived in 15 minutes and we were completely evacuated within 15 more minutes. We and all our helper friends went on and did the same for many others. I don’t know the number but I know that together we took hundreds of horses to safety.  Mariano Alario (Nina’s husband and fellow trainer) and I did the scariest thing we have ever done and evacuated horses out of a property that was ON fire. We hope everyone who had to do this today is safe and sound. Thank you to all who has been awake all night and helping all our animals to safety!  We are still ready and hooked up. Just call us if you need help.”

Sonoma-based horse hauler Annie Zurth has been working nonstop since the fires broke out.  “It’s like a war zone here,” she says.  “So many have lost everything. I have never experienced anything like this.  I have driven through fire, assessed wounded horses, and donated hay.”  She is going above and beyond by adopting Tucker, a twenty-year old Quarter Horse burn victim who was the only survivor out of three horses in his pasture.  His owner lost everything — his ranch and his home — and wanted his horse to go to a good new home with someone who would take care of him as he recovers.

Eleanor Hellman is an accomplished amateur hunter/jumper rider who sprung into action as soon as evacuation orders were issued.  Since Sunday, she has been transporting all types of animals and taking them in to care for.  Bennett Valley in Santa Rosa was among the toughest areas hit and Hellman hauled several horses to safety from there.  But she says she wasn’t the only one, as ten other trailers were lined up on the road and ready to transport.  Under conditions where human instinct says to flee, it is remarkable to see how people like Hellman have put themselves quite literally in the line of fire to help creatures who can’t help themselves.

Hellman has been coordinating her efforts with others who have the resources to help, including Shelina Moreda, a professional motorcycle rider with a passion for animals.   Moreda says, “The one positive thing about this tragic situation is seeing how it is bringing the community together. Supporting our neighbors, the way it should be. We have more than fifty trucks and trailers rescuing animals and everyone doing all they can to help. Dairy people are picking up horses, pigs, and goats. Horse people are picking up cows, sheep, and chickens. Everyone is banding together. It’s impressive.”

Countless barns have offered stabling and Julia Nagler of Kenilworth Stables in Oakland is sending five hundred bags of shavings to the Solano Fairgrounds where many evacuated horses have been taken.  Dressage rider Juli Gumbiner of Watsonville is in the North Bay volunteering for the weekend.  Her barn, American Sporthorse, gathered together hay and shavings and sent them up to evacuation centers.  Gumbiner says, “We want you [fire victims] to know the entire state is here for you and wants to help however we can.”

There really is no bright spot to be found in this tragedy, except for the bravery and teamwork shown by so many people.  Two Facebook groups, ‘Fire Nor Cal – Horse & Pets Affected Sonoma, Santa Rosa, Petaluma By Fire’ and ‘Sonoma/Napa Fire Livestock Evac’,  have been started by the community to connect people who can offer help with those who need it.  They have nearly a thousand members in total and are posting evacuation updates as soon as they are announced.  The most up-to-date donation needs are posted on the Solano County Evacuation Center website.  The fairgrounds is currently housing 467 animals.

It’s important to note that once the fires are out, the need for help will continue.  In the words of Eleanor Hellman, “It is wonderful so many people want to be generous now.  But these animals will need our generosity for weeks, months, or even years longer.”

Show Moms Are the Best Moms