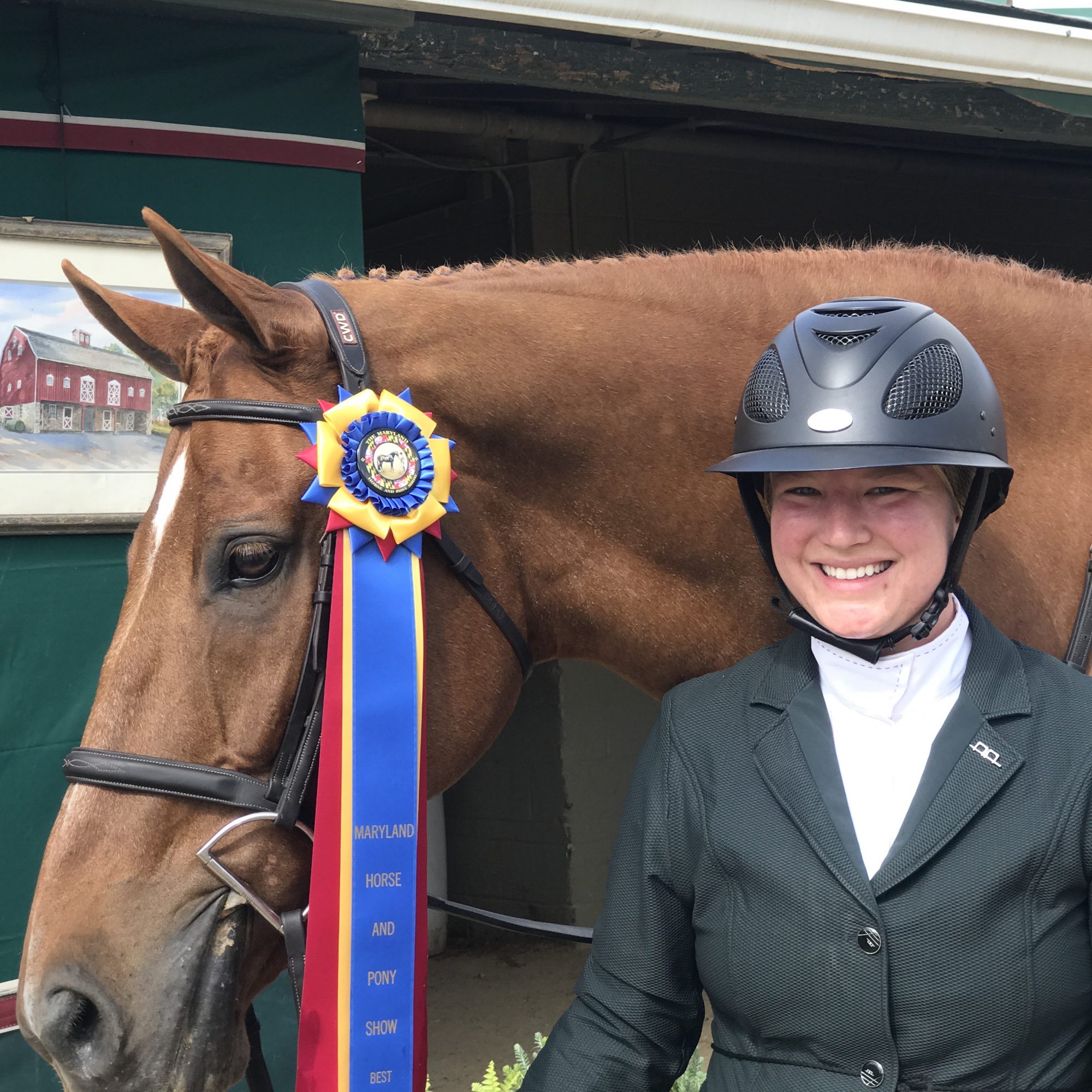 Six divisions ago, I wasn’t really sure I wanted to ride anymore. I have always loved this sport and always will, but my love is only somewhat related to saddle time. I love spending time with my fleet of ponies – the quiet mornings hand grazing as the sun rises fill me with as much joy as anything that happens in the ring. I love being an owner – watching young riders advance in their own riding, horsemanship, and career from the sidelines with a guiding hand. I don’t publish The Plaid Horse out of any gift or ability I have in the saddle.

If I never were able to ride again, I would still happily thrive laying down in a pony’s stall with him while I answer a horde of emails on my phone, holding treats out as they emerge from the ring, and grooming an ever-more-beautiful animal. And my nervous pony-mom tick – rolling wraps. When I’m back at the barn, there is never anything unrolled. Ever.

So, six divisions ago, I was in a lull. I was seldom riding and when I did, I spent my time scared, nervous, in my head, and not having much fun. I felt unfit and struggled through the most basic exercises. I knew what I needed to do – I knew how I should coach myself but the magazine monolith led every decision, every action, every late night and early morning, and I just couldn’t bring myself to do better. I knew I wasn’t enjoying what was happening and I knew none of the horses were either.

While I puttered around not riding through indoors two years ago, Fall turned to Winter and I had no plans to make another go at it. But at Thermal opportunity knocked. I walked in the first week and Traci Brooks said, “Hey! Are you going to come show with us this year?” And I just said yes. I didn’t say I haven’t sat on a horse in months. Or, I’m in a funk. Or, I’m a terrible, incomplete, shade of a rider right now. I just said yes.

My mom got home to our condo that night to find me doing squats in the kitchen. To her queries, I tried to explain… I might get to ride (if Traci was serious – I didn’t even know) and they’re going to think I’m such a buffoon. Morning and night, before and after the horse show each day, I tried to get as fit and/or strong as I possibly could within a span of a few short days. I had a goal. It was potentially not even a real goal, but it was enough to prioritize me slightly over phone calls, texts, and endless emails.

And then the most magical thing happened – I got on for the first time in months, about half hour before showing, and I learned. I made mistakes and was walked through correcting them. I felt improvement. I started riding the correct track. I got on the right pace and rhythm. I felt occasional glimmers of confidence. I walked up to the in-gate and – still terrified – knew that I had already won.

The next week, I kept improving. I felt like I was accomplishing. All hope was not lost on me as a rider and I felt like I shouldn’t throw it all away. Quite the contrary, now was the time to buckle down and become. As those of you who follow my journey know, it was not meant to be last year. Business success led to business stress led to my inability to see past my computer and just when I was able to say ‘ride’ again, my appendectomy put me square back in the non-riders camp.

One year of ‘noodling’ on how to ride better and attempting to get fitter was derailed by having to spend weeks not lifting anything and moving slowly. Despite my best intentions, I arrived at Coachella this year at roughly the same place as last year… not having ridden a horse in months and physically weak.

Riding on the first day, I felt lost and nervous and stressed again. I had reverted and was overwhelmed in the schooling ring. We moved slowly and built my confidence to be ready to walk up to the ring and somehow, Sundae pulled out consistency for me when I brought none to the table. The second day, when I walked into the show ring and cantered down to the first jump, I took a deep breath and smiled. I saw the distance from so far out and rode down to that jump and it was perfection. I hope I remember that one jump for the rest of my life. It was the best feeling in the world.

With much larger success than ever before, I started to add riding into my life, to squeeze in more days at the gym, and with the help of my husband, Adam, to eat better at home. And by larger success, I mean I rode almost once or twice a month on average this year. We’re improving on an incremental level here – life is a grassroots campaign and my riding is a grassroots rally.

With the encouragement of my team, I took the plunge again. I decided to show at the Maryland Horse and Pony Show. I arrived on Friday to have two (TWO!) lessons on two different horses. I really enjoyed riding a beautiful hunter named Amasing F or ‘Foster’ to his friends. I made mistakes and he was unconcerned and I tried to match his spirit. We showed the next day to exciting rounds and fun success.

As any good streak goes, all you can do is wait for the inevitable end. It outwardly came on my second day with Foster. He was tired, I was much more tired, and my inability to communicate what I wanted could not have been more evident. He tried his best, but his mind reading and override buttons were a little too rusty to bring home top calls. However, as my goals are to learn, it was a satisfying attempt, division, and day. I felt myself getting physically stronger while fighting through fatigue, heat, and trying to use my legs and aids more effectively.

The funk is over… for now. I’m sure it will happen again, but I will have better strategies in place to work out of it. For now, it’s all about putting myself out there, making mistakes, challenging myself, and thinking of the long term goals: becoming a real rider and horseman in the saddle again. So, here’s to doing the extra class, taking the harder option, one more interval at the gym, and trying to keep up with the world spinning around me.

This year, 2017, I’m wrapping up ten years of consciously saying yes to opportunity and being game. Through no real intention or planning, this year has been the year of Piper. I’ve enjoyed success like no other time in my life and appreciated all of the interactions that have led me to this place. I’m not sure what is coming, but I will always smile with the rides I’ve had the opportunity to have. I hope saying yes and being game to new adventures yields a fraction of these riches in the years to come.

This is Not the Sport I Signed Up For: Riding through...