Home Press Release It Was A Winning Day For Victoria Colvin At The Pennsylvania National... 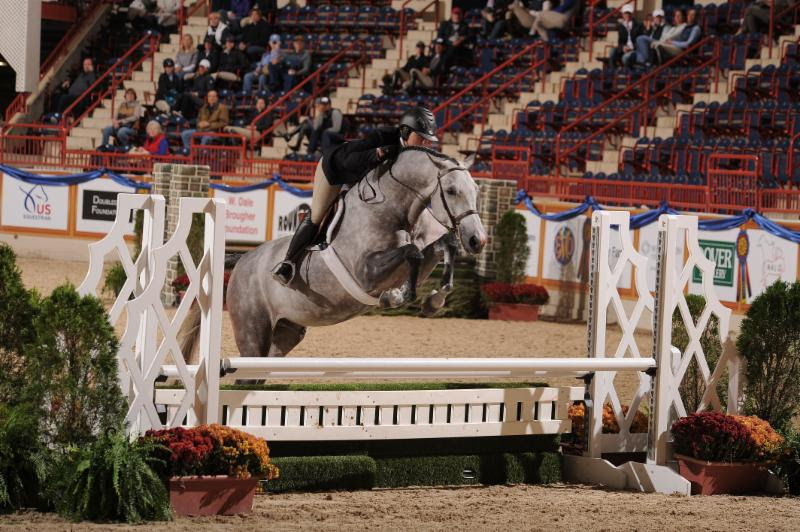 The pair were consistent throughout the division, winning two classes and placing second in the Under Saddle on Tuesday, then won yet another class on Wednesday with a score of 91.  The last class of the division was not as perfect, the pair were only able to post a score of 78.

“He got a little tired in the last class,” explained Colvin. “He is a horse that the Ingram’s purchased from Kent Farrington in Florida.  He is only a 6-year-old and he has shown maybe four or five times.  He doesn’t have as much experience as the regular horse, but he went around here better than we expected.  Every round he jumps he gets better. He was really consistent out there, but by the end he was exhausted, he didn’t know what was happening.  He is just really nice.  Next year I plan on doing the First Year’s with him and see how he does but eventually he will be John’s amateur horse.  To see him end the year on such a high note is great!”

“I love making the young ones and then seeing them get better,” Colvin continued.  “And working with the Ingram’s is amazing.  Everyone at the barn is so nice and so calm.  I have never been in a barn like it, where everybody is consistently nice.  It is rare to have that in a barn. If the horses don’t do well the attitude is that they are babies, so it is fine.  I really like that.””This is the second year that the Ingram’s have owned him,” said Colvin, who now works from the Ingram’s farm in Nashville, TN.  “He did the 3′ last year and I did him in the 3’3” this year.  Martha Ingram shows him in the Amateurs and he is really sweet for her.   He is the perfect horse, he is so consistent, and jumps right around.  He is pretty automatic.  Martha and John [Ingram] are both really good riders, so you don’t really have to do much to get horses ready for them to ride.  It is just getting them a little less green.

About the Pennsylvania National Horse Show

Clairvoyant with Christina Serio in the irons for owner Wendy Janesky, won the $15,000 USHJA Green Hunter Incentive Stake with a score of 90.  Hemingway, owned by Stephenie Bulger and ridden by Sandra Ferrell placed second with a score of 89 points.  Colvin placed fifth with Antinore.

More than 1400 qualified Junior and Adult competitors from the U.S. and abroad will vie for more than $500,000 in prize money and eight national championships – including the prestigious Dover Saddlery/USEF Hunter Seat Medal Final, and Neue Schule/USEF National Junior Jumper Individual and Team Championships. “Junior Weekend” will take place October 12-15, followed by “Senior Week,” October 16-21which includes the Open Jumper and FEI competitions. This year’s show will again host three internationally sanctioned FEI CSI3* rated jumper classes including the $35,000 Keystone Classic, $40,000 Big Jump, and the $100,000 Prix de Penn National Grand Prix presented by the Lindsay Maxwell Charitable Fund, the culminating event which will be held on Saturday evening, October 21 and will feature over 40 top riders from seven countries, including six Olympic veterans.