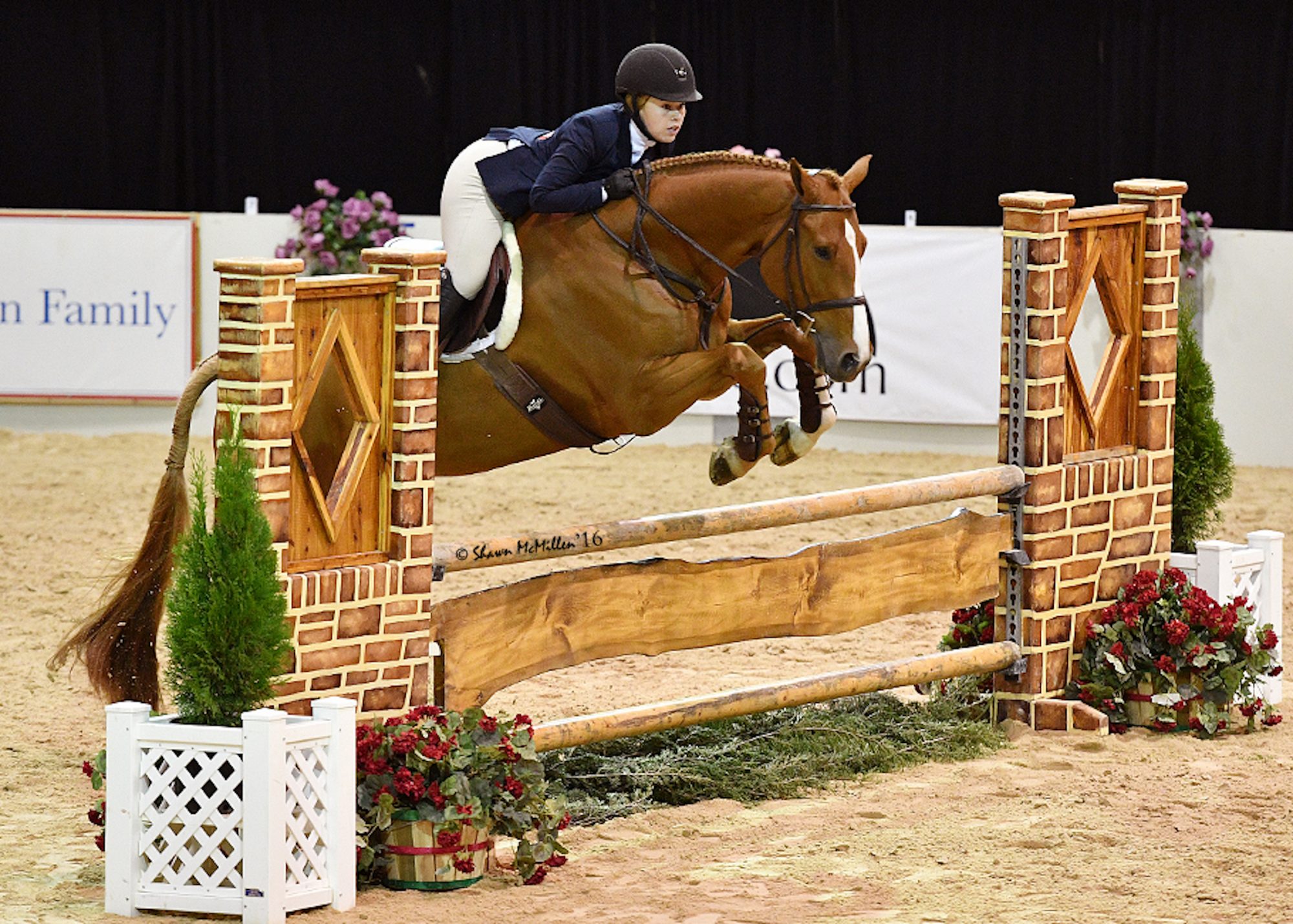 Above: Emily and Sinatra showing in the Ariat Finals at Capital Challenge. Photo by Captured Moment Photography.

Click here to read this article and more inside the 2017 Equitation issue of The Plaid Horse Magazine.

California-based amateur rider, Emily Goldberg, has a message for young riders: there is life after the Junior Divisions! Goldberg is an extremely successful rider in the Amateur Owner Hunter and Adult Equitation Divisions. Aboard her horses Sambuca and Sinatra, Goldberg has garnered numerous top ribbons and championships, ranking her high in the USEF Horse of the Year standings. A full time student at Pepperdine University, she is a part-time rider who juggles the rigors of academia and high level equestrian competition. Like many who participate in equestrian sport, her life is a balancing act of time, concentration, and energy.

“A less-than-fulfilling junior career doesn’t mean that you can’t be a top amateur,” Goldberg explains. “I rode a lot as a junior, but never really got going until I was an amateur.” Her junior career was spent primarily in the hunter divisions, culminating with the positive experience of making up a young horse into a reliable, seasoned competitor. Solomon’s Mines is a horse that Goldberg bought as a six-year-old. She brought him up through the Junior Hunters, and he is still today competing in the Equitation Divisions in California. She fondly refers to him as a “schoolmaster.”

As her junior career ended, Goldberg moved into the next phase of her riding career with a new trainer, new location, and new horses. She began to ride with Victoria LaCagnina at Storia Stables in Santa Susana, CA. On her old junior hunter, Goldberg competed in a few Adult Equitation classes. “I knew it was time to look for a top Amateur Owner Hunter horse,” she states. “I was ready to really break into the hunters with some amateur horses.” Her first foray into the A/O’s was on Emma Snow, described as her “starter” horse. As her skills and success grew, so did her ambition. With the guidance of LaCagnina, Goldberg traveled to Europe and purchased a six-year-old, Sambuca. Shown a few times in 1.10 meter classes in Europe, the beautiful bay gelding proved to be a quick study in the hunter discipline. Arriving in September, 2015, Sambuca began his career that fall in the Baby Green division with LaCagnina in the irons and the Low Adults with Goldberg aboard. The next few months saw the horse move up to the 3′ Pre Green and 3′ Adult Hunters. Early in 2016, Goldberg began to show Sambuca in the 3’3″ Amateur Owner Hunters, a quick ascension for a young horse. “It is easy for him and he uses his body well,” she says proudly. “He is like a puppy until it is show time; he knows when it is time to win!”

To round out her Amateur Owner Hunter string, Goldberg purchased LaCagnina’s horse, Sinatra. The trainer had imported him as a four-year-old and took her time developing the gorgeous chestnut. “The first time I sat on him, I knew we were a match. He has a great work ethic and is so versatile.” Although Sinatra’s looks and way of going are classic hunter, he can also double as an equitation horse. At last year’s highly competitive Ariat Adult Equitation Finals, Goldberg substituted Sinatra for her customary equitation horse to finish fourth. “He has so much quality and the perfect expression. This class was the highlight of indoors for me.”

In 2017, Goldberg fulfilled a lifelong dream and participated in the illustrious Devon Horse Show with both Sambuca and Sinatra. In addition, last year was Goldberg’s first trip to the storied eastern indoor horse shows. She qualified for the Pennsylvania National and Washington International on both hunters. It was the maiden voyage around the indoor rings for all of them, and the trip was successful. “I was so nervous,” Goldberg admits. “But, the more we did, the less nervous I became. My horses were just great.” The experience of last year’s circuit will certainly benefit the string at this year’s competitions.

2017 is my favorite show year,” Goldberg exclaims. “It has been so nice to have the same group of horses for a full year. I have had the opportunity to get to know them and not have to learn a new horse.” She has worked hard under the tutelage of LaCagnina. Now with three hunters and an equitation horse, Goldberg’s riding days are arduous. Her trainer emphasizes the importance of connection, finesse, and trust in hunter riding. “I have learned so much from Victoria,” she explains. “She taught me the difference between a manufactured ride and a good ride. Before [Victoria], I had a hard time forming a partnership with the horse. I have learned that riding is not dominance, but a partnership.” LaCagnina’s teaching theory includes helping her riders understand the horse’s point of view and the cause and effect of a rider’s actions and aids. Goldberg describes her trainer’s program as “feel based.” She compliments LaCagnina’s ability to pair horses and riders successfully. “A good match of horse and rider is the first step toward success. The second step is practice and communication,” Goldberg explains. She also appreciates her trainer presenting riders with challenges more difficult than what they will encounter in the ring. Having conquered tough exercises at home, the courses in the hunter ring look less intimidating.

Goldberg’s horses show under the name Lasorda Holdings, an homage to Goldberg’s mother and grandfather. “My mother has been my biggest supporter. Her last name is Lasorda, so we established an LLC in the same name.” The family buys and sells the amateur horses as a business. With her mother as cheerleader, sponsor, and business advisor and an effective trainer in LaCagnina, Goldberg is an impressive competitor in the Amateur Owner Hunter ring. Her riding career is soaring as she nears graduation from Pepperdine with a degree in Journalism. She is proof that there is equestrian life after the age of eighteen – that higher education and a career do not preclude riding. Take heart junior riders!