Home Blogs Barn Lounge When a Dream Becomes a Goal 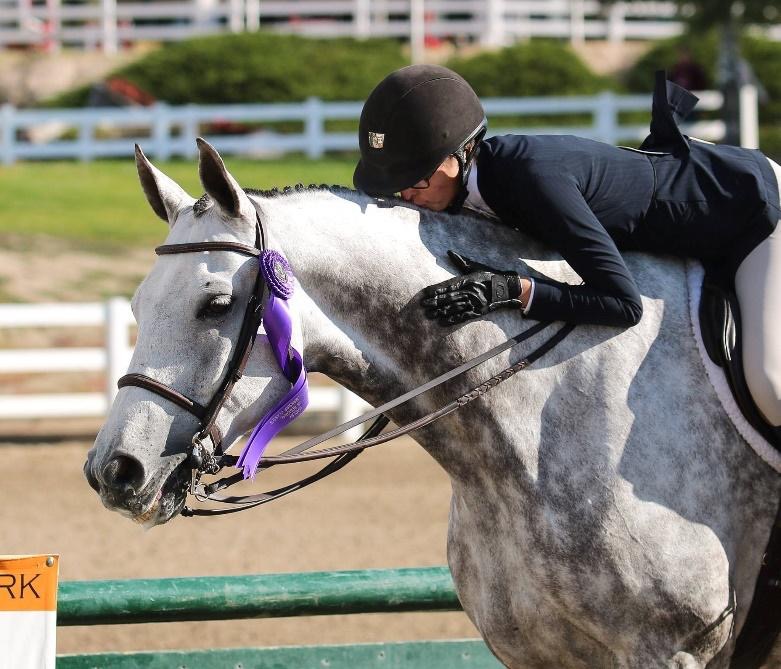 Above: Thanking my incredible Carpe Diem Star during the prize giving. Photo by Tori Weed.

I have found that people often blur the lines between a goal and a dream. In my opinion, a goal has some basis in reality. It is something that is truly achievable, whether it is tomorrow, a year from now, or in several decades. A dream, though, is a wish or a hope, perhaps a farfetched idea.

For me, riding at Maclay Finals was always a dream. It was something I never really expected would become a reality. I would daydream and imagine myself getting there, being the underdog that comes out of nowhere and wins the whole thing. Everyone has done this for something they dream about, but most of the time it’s just that: a dream. Somewhere along the line, I decided to put the hopes into action and turn the dream into a goal.

Last year, I began competing in my first 3’6” equitation classes and got my first “Big Eq” experiences. I didn’t do any point chasing, but I took advantage of the classes that were available to become more consistent. As many do, I struggled a bit that first year, but it was incredibly valuable mileage that I needed in order to be successful this past year. This season, I have been more consistent, ribboning at ‘A’ and ‘AA’ shows, even at impressive venues like HITS Coachella and the Colorado Horse Park. In July, I got the 13 points I needed in order to qualify for the Region 6 Maclay Regional competition. I was truly in shock. It had been a goal to go to Regionals this year, but until I actually had those important qualifying points and made arrangements to go to Colorado in September for Regionals, it hadn’t set in that I would actually be competing there.

Going into Regionals, I had zero expectations. All I really wanted was to have a good experience. I hoped for two things: not to fall off and not to go off course. The class was held on Sunday morning, so I had two days of showing beforehand to get comfortable in the Olson Family Arena at the Colorado Horse Park. I had good ribbons in the age equitation and the Maclay qualifying class, so I felt comfortable and not very nervous before the class, unlike many of my friends and competitors.

The Saturday afternoon before the class there was a rider and trainer meeting where all of the rules for the class and schooling were outlined. They told us that they would be inviting seven riders to Finals, with a possibility of a couple more, depending on the numbers from the other regions across the country. My goal for Regionals, truly, was to get around the course.  My dream was to come home with a ribbon.

My dream came true Sunday morning. My equitation horse, Carpie, and I went late in the class. We put in a respectable round, making just a few minor mistakes. I also played it safe by not taking the inside track options. The judges took back 14 riders to flat, splitting the group in half.  I found myself waiting with the other top 7 riders, while we watched the first group be tested. I couldn’t believe that I was there, sitting with my little Carpie between some of the nicest horses and best riders that I had ever competed against. Clients of Cindy Cruciotti and previous regional winners surrounded me.  I actually had a chance against these top riders!

In the flat phase, I made a few mistakes, but my number was still called when the top 10 were invited into the arena for the prize-giving ceremony. I achieved my goal by being in the lineup. I remember when the eighth place number was called and it wasn’t mine. I looked to the rider on my left. We smiled at each other, knowing not hearing our numbers meant we would both be getting an invitation to the Finals. I finished seventh, which was truly better than I could’ve ever hoped for. Within an hour of the completion of the class, I received an email with my invitation.  I had surpassed all of my hopes and dreams with that purple ribbon.

As I prepare myself to go to Lexington for the ASPCA Maclay Finals, I once again have zero expectations. My goal is the same: to get around the course.  I know I have a very low chance of making any callbacks.  I want to go and have this experience with my amazing horse, trainer, and parents. Never would I have believed that my dreams would become my reality.