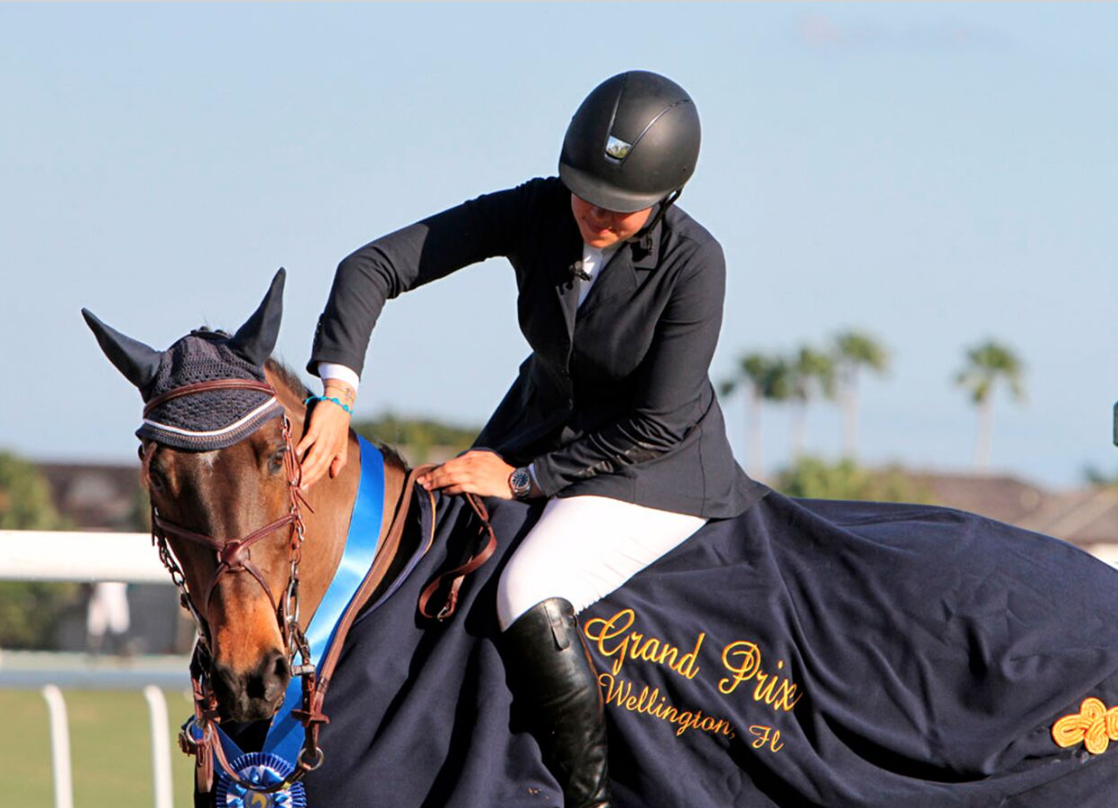 Above: Brianne Goutal winning the 2013 $50,000 CSI2* Grand Prix at the Stadium in Wellington, FL with veteran partner Onira. Photo by Pro Equest.

TPH Intern Annie Brimingham caught up with Brianne Goutal at this year’s Hampton Classic shortly before the retirement ceremony of her famous show jumper, Onira. The classic was the final stop on Onira’s “Farewell Tour,” where the pair finished second in the $30,000 Boar’s Head Open Jumper Challenge. Goutal sat down with us to answer some of our questions about the 21-year-old gelding.

What makes Onira different from your other horses?

“Everything. Absolutely everything. I think he’s beautiful, and special in every way. He’s always been a major competitor and partner. Through up and downs, he’s always consistent. Everyone who has ever come into contact with him will tell you he’s on a human level of intelligence. He has the most beautiful hazel eyes, which is really uncommon in horses, so you really see him looking at you, and can tell where he’s looking and what he’s judging. He’s always one step ahead of everyone whether it’s in the grooming stall, the ring, or prize-givings. He’s ‘officially legal’ now, and ultimately just the most kind, giving, brave… whatever positive word you can come up with, it fits him.”

How did you acquire him and when?

“Krista Freundlich, the barn manager at Beacon Hill, rode his mother K.Ylona D and kept in contact with the owner. She connected us and we went to New Jersey to try him… I don’t even know if we vetted him, I took him over a plank that Frank [Madden] had set up, it was probably 1.40 meters, and I basically ran him right to the base and he still jumped it amazingly. We bought him then and there. He was seven and I was fourteen.”

How has his showing and training schedule changed as he aged?

“When he was younger we used to compete him more. For sure, we’ve done less as the years have gone on, but he, even as a young horse, never really needed  all that much. He was always ahead of the game at all points.

The main difference is probably just the number of shows…he had a couple of injuries that sidelined him, and every time he had an injury we really made it a point to do double the time they told us. If they said six months, we rested him for a year. I always made sure to respect those injury timelines and him as a horse. He’s a pretty small horse and very thoroughbred-ish, so with that comes all the perks of speed and agility, but also with fragility,” Brianne laughed. “We tried really hard to manage his soundness and be very respectful of where he was physically all of the time. Otherwise, he never needed that much training and so not much has changed through the years.”

What are some of Onira’s biggest accomplishments throughout his career?

“Oh man, he’s won so much. As a junior, he was one of the most decorated junior jumpers, probably of all time. He’s won multiple team Young Rider and Prix de States Gold Medals, as well as individual Young Riders and Prix de States Gold’s…really every major title. Indoors, Devon, Circuit Championships at WEF, the NAL Speed Finals; all as a junior. He really wasn’t supposed to be a major Grand Prix horse, just a junior jumper, but he then migrated and evolved into a really respected team horse. He represented the United States on numerous occasions, probably around ten Nations Cups, and I’m sure he won at least half. If you look at everything he’s competed in, most of the time he won. When he goes in to compete, he’s ready to win. He also won the Talent Search when I was a junior sort of on a whim. Before we were supposed to leave my horse just wasn’t feeling right, and since he was the only other one I had that had done the open water, we threw him on the trailer and he won there as well.”

Why did you choose this show season for his “Farewell Tour”, and what prompted the Hampton Classic to be the final stop?

“I always said that I would retire him when I felt that I was having to question him. I never wanted to push him to a point where he would leave the ring not as a contender. This is the first year that I really didn’t compete him much, maybe three or four classes in Florida, then a few at Tryon. He did a class at Old Salem, then Silver Oak, and now here. It was maybe ten classes since January, since we never do more than two classes at one show. Out of those ten classes, he won four and was second in two. So, even though he’s still at the top of his game as far as performance results, I felt at this point that I was having to drop him down a level, and we don’t want to go down another level. I’d rather have him finish out at the top of his game. As for the Hampton Classic, it’s just such a special show. It always marks the end of our summer. The field here is so important looking and we always did great out there, he deserved a special place to mark his retirement.”

What were some of the highlights of Onira’s Farewell Tour?

“He won a 1.45 in Tryon, a Mini- Prix in the beginning of August, and he was second in the big class here on Opening Day,” Goutal beamed. “Although, he definitely would’ve liked to win that class! But I think that second place finish was definitely a highlight for me!”

What will you miss most about competing Onira?

“Everything. Absolutely everything” Goutal sighed, “I’m trying to think of the best way to word it and I really don’t know… he just makes every show fun; every class winnable. Simply put he is just so special.”.

What is the plan for him going forward?

“To be honest, we don’t really know yet! The goal is to be able to get him to retire so that he can be just a horse out in a field… but I’m not too sure he’s going to like that very much,” She laughs, “We’ve tried it once before when he had a big injury, maybe three years ago, and we thought it would be career ending, so we tried for about a month and he definitely did not want to stay out. He’s been pampered his whole life so he was waiting for his turn to come back in! I guess we’ll just have to wait and see.”

And with that, Brianne was off to get Onira ready for his retirement ceremony in the storied Hampton Classic Grand Prix field. A big thank you to Brianne for taking the time out of her busy schedule to sit down with us, and congratulations to Brianne and Onira on a wonderful 15 years together! We wish Onira many years of big grass fields and lots of treats!

Show Your Stripes: Products to Empower