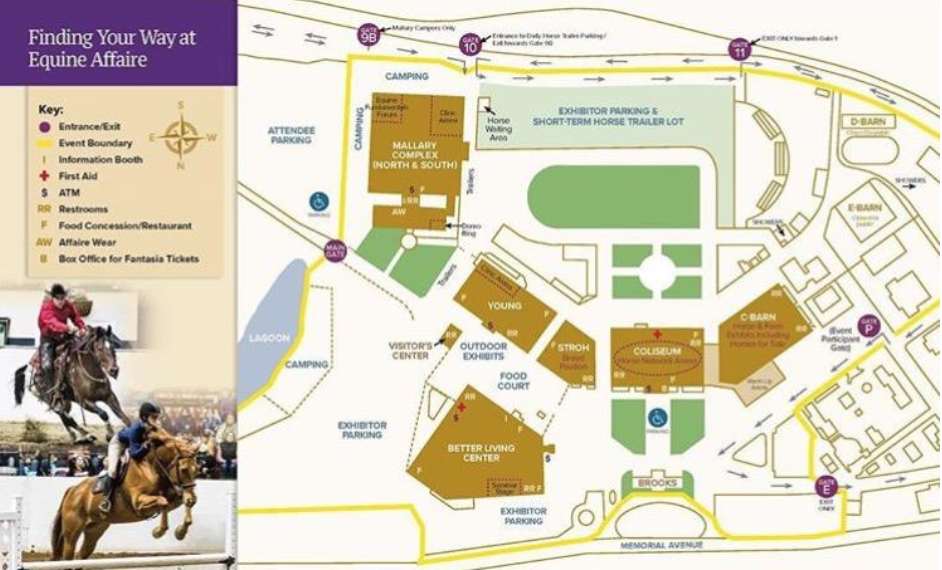 Above: Map of the shopping warehouses and demonstration rings at the Eastern States Exposition grounds. Photo courtesy of Equine Affaire.

The 19th annual Massachusetts Equine Affaire concluded on November 12th, 2017 in West Springfield, Massachusetts. The event is one of three nationwide week-long gatherings of equine enthusiasts chock full of clinics, seminars, and, of course, shopping. If you’ve never attended one of these events before, here’s a few reasons why you need to be at the next Equine Affaire.

The Massachusetts Equine Affaire hosts over 40 clinics, demonstrations, and seminars between 4 riding rings and two seminar centers. Clinics range from gymnastic sessions and Q&A’s with Phillip Dutton to classical dressage with professionals like Vitor Silva and Steffen Peters. If that isn’t quite your style, you can catch clipping demonstrations with Natasha Nagawiecki or a vaulting demonstration with the team from Cooper Hill. No matter what your interests are, the Equine Affaire has you covered!

The Equine Affaire is arguably most well-known for it’s endless array of vendors and shopping options. Hundreds of vendors travel to the Eastern States Exposition grounds and set up shop in one of the five warehouses for the week, and the deals are everywhere! My best scores this year were a clearance Grand Prix TechLite Show Jacket at over 75% off, and Equifit Original Open Front Boots for more than 50% off. Favorites such as SmartPak, Devoucoux, Back On Track, Equifit, Horseloverz.com and CWD Sellier are on-site with sales you can’t find anywhere else. Besides just shopping, multiple foundations (such as Pal-O-Mine Equestrian and Gerda’s Animal Aid) and college equestrian teams (like Centenary University and The Savannah College of Art and Design) set up displays to hand out mission statements and information pamphlets to gain more recognition and gather support. Every booth at the exposition has something to offer, and we could walk for days without seeing it all!

Maybe not the best reason to come to the Equine Affaire… but it sure doesn’t hurt! The “courtyard” area at the Eastern States Exposition is centrally located between all of the shopping warehouses and demonstration rings, and is full of dozens of food vendors for the week of the Equine Affaire! From warm apple strudel and cinnamon buns with ice cream to a barbeque station to my personal favorite, Billy’s Baked Potatoes, you’re guaranteed to never go hungry at the Equine Affaire.

Looking Ahead to The Ebor Festival

How to Deal with Mice or Rats in Your Horse Stables

Evaluating Expenses When Deciding Where to Start an Equestrian Business

What I Learned from a Year Without Horses

The American Tradition of Excellence Equitation Challenge by Whitethorne LLC