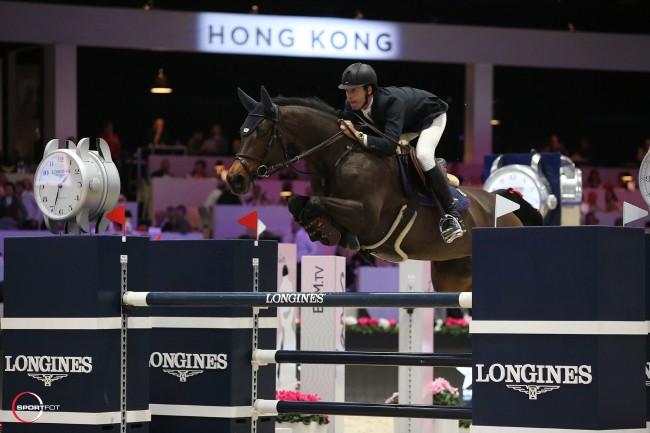 The audience here in Paris watched these elite events with baited breath this afternoon as the riders put on an exhilarating show.

Placed fourth in the Longines Speed Challenge yesterday evening, Leopold van Asten and VDL Groep Miss Untouchable triumphed in a jump-off contested by nine riders during the Masters One Salon du Cheval de Paris/CENECA event, completing the round at breath-taking speed. “She got a good work-out yesterday evening in the Speed Challenge, the rider quipped, almost stoically. “Not quite fast enough though, as we only finished fourth.” Despite the craziness of yesterday’s race, the horse remained firmly focused. “This mare is naturally fast and respectful, and always wants to please. Everything went well today. It was a smooth course and I maintained the right distance coming out of the turns.”

This was the Dutch rider’s first appearance at the Longines Masters and he was enamoured with the wonderful setting and the amazing atmosphere from the crowd.

Second-place French rider Alexandra Paillot (Polias de Blondel) was equally delighted.  “I’m so, so happy. It’s just a dream, such a great opportunity to ride here and Polias was fantastic. I probably lost a bit of time in the roll-back towards the pink oxer; whatever it was, two seconds is quite a big gap.” Nicolas Delmotte (FRA) took third place with nine-year-old Urvoso du Roch.

While the course was prepared, Salim Ejnaïni, a blind rider already spotted here at the Longines Masters of Paris, gave a show-jumping demonstration to the benefit of charity Sur les bancs de l’école, which encourages the inclusion of children affected by autism, especially in schools. He delivered an incredible performance conveying a very strong message on inclusion and the opportunities available to people with disabilities. A cheque for €25,000 was then presented by Longines to Sur les bancs de l’école, the charity backed by the rider.

The temperature then began to rise a degree or two as the time came for a thrilling Masters Power Lido of Paris.

The grandstands were packed and, during every round, the 7,500 spectators sat held their breath before erupting with joy once the last fence was cleared. “They certainly buoyed me along,” confirmed Marc Dilasser (FRA), winner and the only competitor to have cleared the final 2 metres with Indigo Blue Biolley. He made the decision to compete in this six-bar event pretty much at the last minute: “I was waiting to see how Cinderella was this morning to decide whether I would ride in the Grand Prix tomorrow. She was great and finished fifth; that made me chose Indigo for the Masters Power Lido. It’s a great exercise for a horse in training (he is 9 years old). It gives them a bit of experience and confidence in their ability. When I look back, I remember that this is the kind of event that Michel Robert and Eric Navet would enter the day before a Grand Prix. There would be no point jumping that high back home but it’s great gymnastics and Indigo worked it out!”

Now it’s time to hand over to the amateurs and juniors with the Masters Three Hyatt Grand Prix, to be held before several thousand spectators. Then, shortly afterwards, at 20:45, Europe and the United States will do battle in five duels opposing the very best riders from the two continents in a pioneering new event, the Riders Masters Cup! #WaveYourFlag