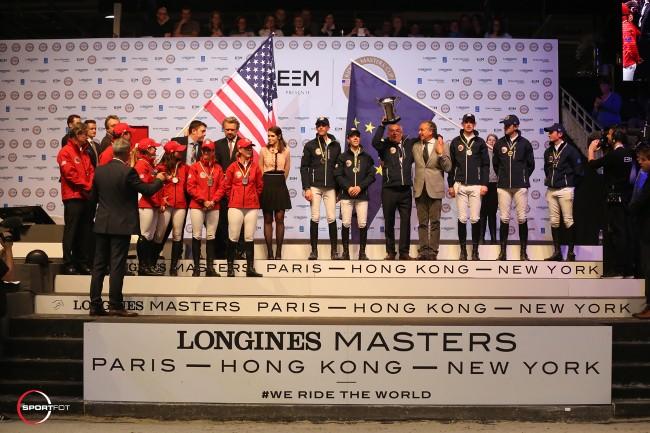 The creation of the Riders Masters Cup was announced just a year ago at the 2016 Longines Masters of Paris and, this evening, the inaugural edition of the event demonstrated that big changes are afoot in the realm of equestrian sports. Created by EEM in partnership with the European Equestrian Federation (EEF), with Longines as Founding Partner, this all-new team competition, which pits the world’s greatest show jumping nations against one another, delivered on all its promises. We look back on this first, history-making edition.

In addition to a thrilling display of competitive sport, the audience were treated to a stunning show, whether they were here in Paris or watching from home thanks to the live broadcast on EEM.tv. Fans from all around the world thus joined in to support their team on social media using the #WaveYourFlag hashtag.

Just after the national anthems and the traditional handshake, the riders descended on to the track in their duel pairings to walk the course. After Staut/Ryan, Reid/Van der Vleuten, Wathelet/Kraut, Kessler/Verlooy, De Luca/Hough had completed their walk, that was it – battle could commence!

This brand-new competition delivered on all its promises, serving up suspense, champions, action and some unexpected twists and turns. All the ingredients were there: the pace of legends, merciless timing, the roar of the crowd and that final obstacle… every detail adding to the thrill of the show.

The tension was palpable among the audience when the first pair out, Olympic champion Kévin Staut and Ayade de Septon* HDC, emerged onto the course for this founding moment in sporting history. It was a quick, clear round, setting the tone and piling on the pressure. By the end of the action-packed first leg, Europe had taken the lead.

Ahead of the second round, the course was altered, giving the teams time to fine-tune their strategy, decide to change horse or adapt the duels. The two team leaders threw themselves into the task, treating the event like the leg of one of the great championships, while the riders gave it their all and the crowd tirelessly cheered their favourites on.

The second round was a Table C event, which only added to the pressure. The excitement – among the audience and the riders – shifted up a notch. Ever bolder, the riders never faltered before a risk if it meant winning the duel, which inevitably resulted in a few faults. Lorenzo de Luca stands out as the only one of the ten riders to have won both of his duels.

The enthusiasm among the competitors and the crowd never waned but finally, the splendid battle came to an end, victory going to Europe with a score of 9 to 6.

“This all-new event is so extraordinary because it makes speed the focus and the decisive factor; that’s unprecedented in an international competition,” confirmed Robert Ridland. Philippe Guerdat said that he was “very proud of the riders who succeeded in putting together a consistent European team”. Grégory Wathelet insisted on the team spirit on the European side and the resounding success of this pioneering edition of the Riders Masters Cup, an event that clearly upholds the values of excellence and sharing.

We’ll leave the last word to Christophe Ameeuw, CEO of EEM and founder of the Longines Masters series, who came up with this radically new concept. “This evening, the script was perfect, far exceeding our expectations. Above all, I would like to thank the crowd here in Paris; I’m really proud of you. You are what makes this competition what it is. The rematch will take place in New York. But now, here we are – the Riders Masters Cup has been launched and it can only gain in momentum from here on !” Save the date: Saturday April 28, 2018 in New York, for the rematch and conclusion of this inaugural edition. Kelsey Epperson and Augusta Iwasaki Earn Top Honors in the $10,000...