Home Blogs The University of Tennessee at Martin rises up to No. 8. 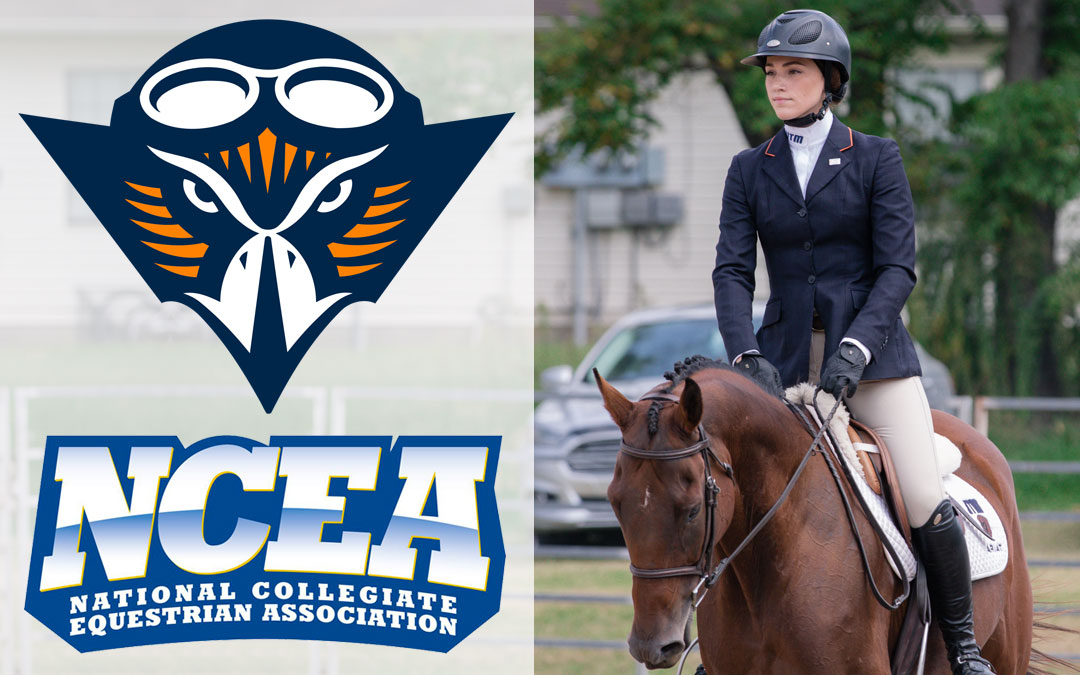 On Thursday, November 9th, The University of Tennessee at Martin’s Equestrian Team started their day much earlier than one might imagine. Most of the athletes could be seen getting to the Ned McWherter Agricultural Pavilion around 6 am, where a flurry of lunging, jump setting, and spot cleaning started to take place. The Masterson Farms Invitational, hosted by the University of Tennessee at Martin, hosted three Division 1 Equestrian Teams: fourth-place SMU, fifth-place Fresno, and unranked DSU. With tenth-place UTM riding against Fresno, and SMU against DSU the first day, the stage was set.

Equitation Over Fences started off The Masterson Farms Invitational, with UTM’s Randi LaChance earning an 86 on Dawson. LaChance’s score was the highest of any of the 16 competitors over fences, securing MOP honors. October’s NCEA rider of the Month, Abbie Hopkins, also won her point for UTM, scoring a 77 on Finn.

The day after Tess Baumann was named UEC Horsemanship Rider of the Month, she won her point for UTM with a 73.5 point ride on Sissy. UTM’s Bobbie Piddock scored a 72 on Hank and Lucy Eier finished with 70.5 points on Juliet to secure a 3-1 lead in Horsemanship.

In equitation on the flat, UTM’s Hunt Seat captain Monika Zoromski rode Rose to a score of 84 points, winning a team point for UT Martin. Randi LaChance won her second point of the day, securing an 82 on Frappe.

UT Martin swept the reining portion of the meet with UTM’s Western captain Madeline Williams scoring 68 points on Hombre and Liana Nowak scoring a 66 on Pratt. Freshman Hannah McDonald made her showing debut, scoring a 67 on Sarge. Freshman Noel Meadows took home her first MOP after scoring 68.5 points on Travis.

UT Martin came home with an 11-5 victory over fifth-place ranked Fresno State University. This meant that UT Martin advanced to the second day of competition in the championship bracket against SMU.

Day two of competition came with a bittersweet defeat. The Skyhawks fell to SMU by 1 point in an 8-7 loss. However, the Skyhawks did not go down without a fight. Monika Zoromski (88 points), Abbie Hopkins (93 points), and Maddy Williams (68.5 points), all brought home MOP honors in Fences, Flat, and Reining, respectively.

“I could not be more proud of the way our young team stepped up this weekend. We played competitively against the number 4 and 5 teams in the country and had a quality win against Fresno State,” said UTM’s Head Coach, Meghan Cunningham. She continued, “There were strong performances in each of the four events and our ladies should be excited as we look forward to the spring semester and post-season play.”

UT Martin puts on the tournament-style Invitational every year. This year, the event was sponsored by Masterson Farms. “My goal in hosting the Masterson’s Invitational was to provide an experience to our student-athletes similar to our conference tournament in March with the United Equestrian Conference. I am a strong proponent of the bracket format as it fits the model with many other collegiate sports,” says Cunningham of the event.

After UTM’s success at the Masterson’s Invitational, the team moved up to the 8th spot in the NCEA national rankings, standing above TCU, University of South Carolina, DSU, and SDSU. The No. 8 ranking is the highest in program history for the NCEA polls. UTM’s spring season starts February 16 against TCU. UTM will also ride against SMU, SDSU, Sweet Briar College and Minnesota – Crookston throughout the season.

The Heart Horse That Went From Green Broke to Maclay Finals...