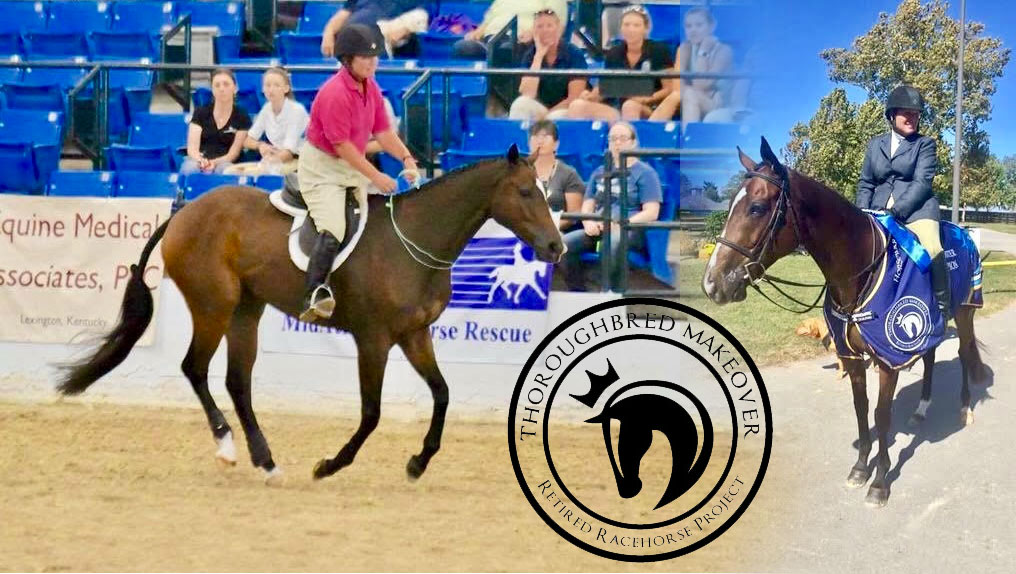 In October of 2007, Charlotte Cannon and her thoroughbred gelding “Seeking Fame” competed at the Kentucky Horse Park in the Retired Racehorse Project’s Thoroughbred Makeover competition (“the Makeover”) and won the show hunter division out of 52 competitors! The pair also ended up in 8th place overall out of 45 entries in the Freestyle competition.

The TB Makeover is a competition designed to showcase the trainability and talent of off-the-track thoroughbred racehorses as well as educate the public about the process of transitioning these special horses into second careers. Charlotte lives with her husband Tommy Robinson, also a trainer who was successful in the TB Makeover with 9th overall in Dressage, in Indian Land, South Carolina. They train out of their facility, Fox Point Farm.

I met Charlotte at a horse show in Camden, South Carolina, several weeks before the Thoroughbred Makeover competition, and I wanted to learn more about why she decided to compete in the TB Makeover and hear how she trained up her OTTB, Fame, for the competition.

How did you first learn about the Makeover?

I actually saw it on Facebook! I had heard about the mustang makeover program, and I thought that this sounded like a really interesting project. My thinking was that I could find a great off-the-track thoroughbred, fix it up, and then take it to The Makeover and afterwards, I could have this really nice horse. It just sounded like a really cool thing to do.

How long did you have to bring “Seeking Fame” aka “Fame” along before the competition?

When I first saw the advertisement for The Makeover on Facebook, I started scrolling around on Facebook sales ads and found a few horses that looked promising. I actually asked my husband if he wanted to go see a horse in Atlanta the next day! We ended up traveling to Atlanta and bought that horse in 2015, but later found out that he had some very bad injuries from his time on the track that wouldn’t allow him to compete in the Makeover. When the plan for that horse didn’t work out as we had hoped, I found Fame in another Facebook ad (in August of 2016), and I messaged the girl that had him and she required me to immediately decide if I wanted him or not. I took a leap of faith and decided to go for it! I bought Fame in the fall of 2016 and just turned him out in the pasture to let him get fat before starting his retraining. The competition started on December 1, 2016, so I had less than ten months to get him retrained and ready for the Makeover.

How did you decide that the hunters would best suit Fame?

At first, I thought that I was going to do the foxhunting competition with him. The plan was to do the foxhunting and the freestyle competitions. Fame was developing into an amazing foxhunter, but as we started taking him to shows, he was just really relaxed and happy. So, I began to consider the show hunters category. Towards the end of the summer of 2017, I took Fame to a farm to make sure that he would be good jumping the more colorful jumps. My husband and I had to decide by the first of August (of 2017) what divisions we were going to do at The Makeover. I picked the show hunters for Fame because I was feeling very comfortable and he was really fun to ride in the ring. I am very glad I did!

Can you talk about the steps that you used to get Fame ready for The Makeover?

Fame came to my farm straight from the racetrack, so the first thing I wanted to do was to get his teeth floated, put him on Gastroguard© (because horses usually have ulcers when they first get off the track), and have a chiropractor come evaluate him. Once those things happened, I turned him out to pasture so that he could learn how to be around other horses. I also did a lot of groundwork with him. You can only ride Makeover horses fifteen times before December 1st the year before each competition, so we used that time before the competition began teaching him how to correctly use his body. During the process, Fame was always a really sensible, quiet horse. When I began riding him, he was ridden about three to four times per week so that he could build up his endurance, but not get back-sore. He had to begin building totally different muscles.   Once he began getting more fit, I began taking him off property to new places. And once he became good at going off-property, we began taking him to little horse shows. His first few shows, he only did the adult walk trot and then the adult walk/trot/canter! I slowly but steadily challenged him at various shows doing different classes as he built more confidence. I felt like the slower I brought him along, the more confidence he built and the faster he progressed.

Were there any challenges that you had to overcome during Fame’s retraining process?

Probably the biggest challenge we had with Fame was getting him to eat. He never seems to like to eat very much. Trying to make him eat enough to get fat was really hard. The next hardest challenge was the condition of his feet. A lot of horses that raced regularly had their shoes changed a lot, and that ruins the walls of their hooves. Often, racehorses end up getting really long toes and their feet just really do not want to hold the shoes. We would fight to keep shoes on his feet.

What was the best part of the Makeover training experience with Fame?

Fame is so smart and brave! Over the last twenty years or so, I’ve been working with paints and warm bloods because I thought that they would be calmer (than thoroughbreds), but Fame was so much more brave and less spooky than other horses I’d worked with in the past. He never thought that the places that I took him to were scary, I guess in comparison to what he saw at the racetrack that makes sense! His last race was in late July of 2016, and that time at the racetrack probably helped him to become a great show horse. I believe that off the track thoroughbreds can make great show horses. If they are successful on the racetrack, that shows me that they have good brains and can handle the stress of training and showing. Showing is nothing compared to the pressures of the track.

This month, Charlotte will begin re-training a new OTTB gelding, and I think that new horse certainly won the horsey lottery when Charlotte chose him! We wish Charlotte, her husband Tommy, and all the other Makeover competitors the best of luck in next year’s Makeover competition!

Hemp for Horses and Its Profound Benefits for Equine Owners