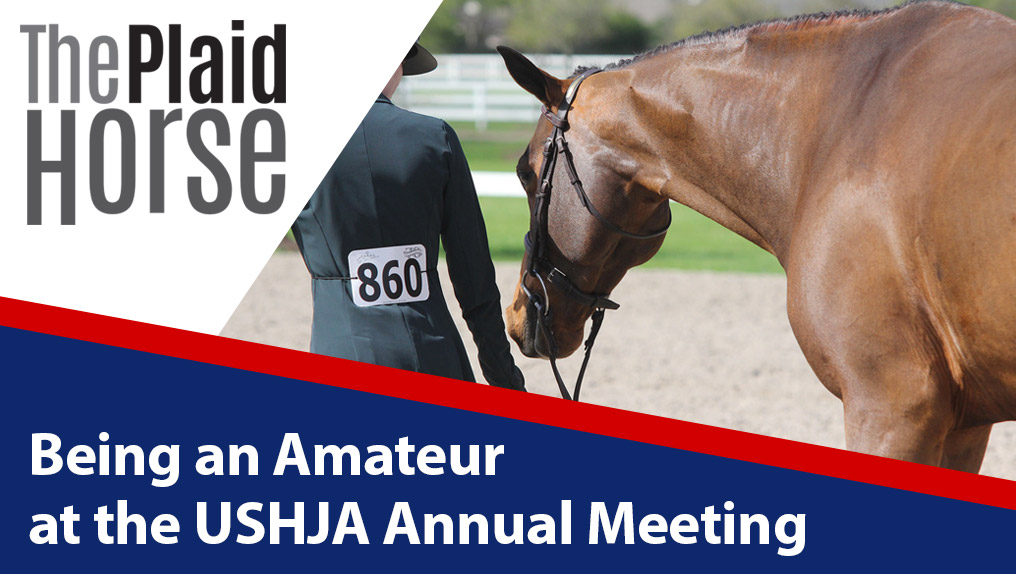 I ride (and write!) like an amateur, but jumped at the chance to cover the USHJA Annual Meeting for The Plaid Horse. I wanted to see USHJA debate and make rules, watch the task forces at work, and share that information with other people, like me, who were watching social media for daily updates. The experience exceeded my expectations.

What stuck with me the most from my week at the convention was the feeling of being heard. Every time I stood up to say something, whether it was in the huge rule change forum or in a five person task force meeting, I felt like I was bringing value to conversation. I was one of the youngest members there and an amateur, but I still had important points to make or other points of view to consider. Many times at horse shows I hear people say that USHJA doesn’t care or that they aren’t doing anything to change things, but I saw the change happening and the care the committees and board put into each decision.

Rule changes were the biggest part of the week. Most task forces can meet at other times or talk over the phone, so by Tuesday and Wednesday, many trainers had begun to leave, leaving the meetings small and casual. This made them mostly member feedback about the programs.

Most notably of the meetings I attended, the National Hunter Derby Task Force and Pony Task Force both talked about derby finals for their respective derbies, but also the struggle of not being able to put them during derby finals week. Putting the pony derby finals during the week of pony finals seemed like a great solution, except that the schedule is already so packed that week that it’s hard to fit anything else in. It would be great to have national finals for both of those programs. I left before the board meeting on Thursday, but would have been interested to see the final vote.

Safety was the biggest focuses during the week. From safety cups, to helmets, longing areas, to paramedics, it was all covered. Both horse and rider safety was heavily considered in each decision made by the committees and board. Several stories of horses falling and badly injured riders whom received poor emergency response times were shared over the week, sparking more debates by several task forces about better regulations in dealing with emergency services at horse shows.

I met many interesting people at the annual meeting, and learned so much from listening to a large group of ambassadors to our industry working together to improve our sport. While not everyone was always on the same side, there were always important points to be shared. There are still problems to be solved, but I think a lot of discussions got started and a lot of good ideas came together.

Publisher’s Note: You Must Really Love It