Throughout all disciplines of riding, accidents and unfortunate injuries happen. Some are more long term than others, like the loss of an eye, or eyesight. Many think if a horse loses or becomes blind in one eye, the hopes of ever riding, let alone competing on that horse are long gone.

Lauren Domenico is a 15 year old girl from Milton, Georgia who rides at Centurion Farm with trainer Karen Boysen. Lauren and her large, green pony, Chivago a.k.a Syd, have been through some tough times together the past few months.

During the beginning of July, a few weeks before this duo would be attending the National Pony Finals, Lauren and her family just got home from a vacation when they heard the bad news about Syd. The stall manager at the barn had just gotten Syd out when they saw his eye bleeding. Lauren and her mom, Jennifer, drove out to the barn immediately to see the damage to Syd’s eye. The injury was so severe, he had to be sent to UGA, a horse specialist center located in Georgia.

At the vet, Syd underwent surgery to fix his eye which they learned he had lacerated and damaged the inner ocular lens. After the surgery he was put on medicine, but was still not happy. They decided they were better off to remove his eye and free him from any pain, so he could return to being a happy pony again and hopefully resume training.

After Syd healed, the duo competed at schooling shows around the greater Georgia area placing second and two fourths in over fences. The next week they placed sixth, third, sixth and fourth in the classic, and are excelling in the show ring despite Syd losing his eye. Recently, Lauren and Syd qualified for Pony Finals 2018! Congrats to Lauren and her family for overcoming Syd’s eye injury and qualifying!!

High school senior, Fallen O’Connell, has also been through the process of riding a partially blind horse, but her situation is different. Fallen has had her 17.1 hands eq horse, Brass Verdict a.k.a James, for two years. James lost eyesight in one eye over six years ago, so when Fallen got him she was well aware of him having only one good eye. However, this didn’t stop her from achieving tremendous success in the Big Eq divisions.

Six years ago before Fallen owned him, James had a hypox in his eye which later got infected. It was very severe. They tried to save his eyesight, but couldn’t. James’ one bad eye doesn’t affect him being a normal outgoing horse who loves to be ridden, and cock his head like a puppy when he begs for treats.

Fallen rides at Willoway Farm, located in Scottsdale, Arizona where her trainer, Kathy Johnson, has helped lead her to multiple successes including attending Maclay Finals. Fallen has attended shows everywhere with James including, Pessoa and Maclay Finals, Colorado Horse Park and Thermal California. Even with his blindness in one eye, she has still been able to maintain a great level of success by placing eighth at Maclay regionals, getting champion and reserve in the age group equitation at the Colorado Horse Park, and making the work off three weeks in a row in the Pessoa — resulting in multiple wins.

Syd and James aren’t the only horses showing with just one good eye. Many professionals have great horses competing in high jumper classes and sometimes even Grand Prix’s. Olivier Philippaerts, a Grand Prix rider from Belgium used to have a horse blind in one eye and they continued to have amazing performances in multiple divisions.

Like tough wild animals, horses are able to adapt very quickly to their surroundings and changing bodies — including eye injuries. It is possible to show a one-eyed horse, and both Lauren Domenico and Fallen O’Connell have proven it. 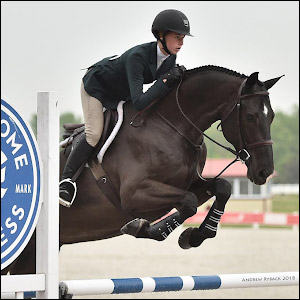 About the Author: Erica shows on the A circuit in the 3’3″ Junior Hunters and Equitation. At 15 years old, she is a sophomore in high school in Illinois and has long term goals to get to the Big Equitation.

The Plaid Horse to Have Media Partnership and Magazine Distribution with...