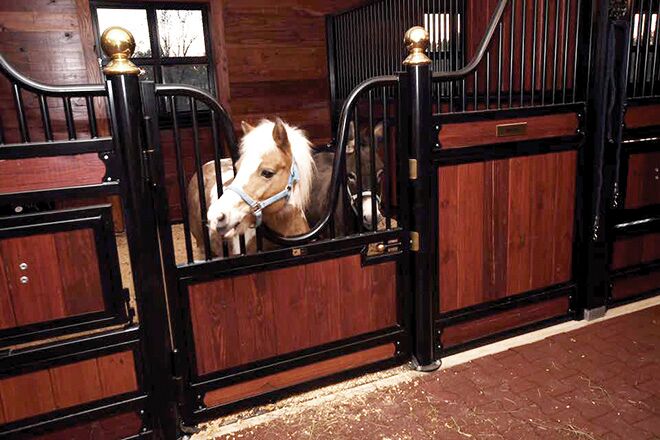 Above: Sharing a moment with Emma, the mini who was rescued with her foal from an auction. Although she can no longer see due to moon blindness, she responds wonderfully to her name.

By Ashley Shaw, Photos courtesy of the Rolfes

Mini ponies always draw equestrians’ attention, and how could they not with their tiny, adorable faces? However, this same cuteness may be become more of a curse than a gift, for it is not uncommon for mini ponies to be acquired without the excited new owner realizing the immense responsibilities involved. As a result, these unfortunate creatures can end up neglected and abandoned. Working to rectify this cycle of tragedy, the world of mini ponies has been blessed with the Rolfes, a St. Louis family who has turned their 23 acre property into a haven for mistreated miniature horses and donkeys. They not only have changed the lives of their fifteen equines, but strive to educate the public on the care of these animals in order to prevent unqualified adoptions. The Rolfes are dedicated to making a difference that is built to last.

The Rolfes’ story of belies the undeniable passion of a committed horse owner. In the beginning they only had one horse which they boarded at a different barn while their own stable was being built. But, Belle Rolfe, the daughter, mentioned it might be fun to have a few minis. Completely unfamiliar with these small equines, the Rolfes ended up buying their first two off of Craigslist, later learning that they were the fourth owners of these ponies which were only two-years-old. From this, they realized that minis are “often sold, traded, and bartered for. The lucky ones find loving homes, the unlucky ones…well, not so much,” as stated by mother, Stacy Rolfe. A few months later they were contacted by the seller of their first ponies, informing them about a mini with a foal that were up for auction. Kept awake at night by the prospect of the mother and foal being separated, Mrs. Rolfe soon asked for a picture of this pair. And, after seeing a photo of the mini being ridden by a boy far too big, she proclaimed that her “heart was even more convinced that I had to have her.” The next two mares were saved from the fate of amusement park pony rides and, after discovering that they were both pregnant, their mini total came to eight. The remainder of their ponies came from a local rescue as the ardent horse l overs were unable to resist the need to rehabilitate the abused and neglected minis that ended up there. The Rolfes’ dedication to saving minis is not just about quantity. They take what they learn from each new experience and seek to share the knowledge and understanding with everyone.

While there have been many challenges along the way, there are two minis that present obstacles the Rolfes are still working to overcome. Both having been mistreated and adopted from a rescue shelter. One has become laminitic, is insulin resistant, and has Cushings disease, thus requiring a strict diet and routine medications. Although the work can be a struggle, the Mrs. Rolfe professes that the mini, named Chloe, has “a heart of gold” and that she “will do anything for her.” The other, a miniature donkey called Molly, presents the psychological hardships of abuse as she is still fearful of everything. Despite her resistance, Mrs. Rolfe is confident that the mini will make progress, declaring that, “We’ll get there. It’s just going to take time.” These afflictions are more extreme, but still serve to illustrate that one of the biggest misconceptions about minis: they are less work because they are little. Mrs. Rolfe would even argue that “they are more work than a full size horse” in that they are very susceptible to health issues and still require the same veterinary care and diet regulation of full size horses. This is a concept that the Rolfes strive to emphasize to the public, another being the restrictions of riding minis. Mrs. Rolfe says that “a general rule of thumb is that a child should be no heavier than fifty pounds” to be on a mini, and for the most part they should be kept just as pets.

If a person is considering purchasing a mini, “They need to be prepared to take care of their mini though thick and thin,” according to Mrs. Rolfe. Sickness cannot be disregarded or deprioritized, and they need plans for shelter in all weather conditions. Potential owners should locate a vet and farrier that are able to provide proper care and stay up to date on their mini’s health information. Mrs. Rolfe believes the last thing a person should do is “make an impulsive decision to buy a mini,” for this is how ponies end up traded and bartered for. When a prospective owner is confident they are ready to care for a mini and are looking to rescue one, an online search is a great place to start. Many rescue ranches and humane societies have miniature horses, even if they don’t explicitly state it. Horse auctions occasionally have minis and, unfortunately, kill pens do, too. It is a great deed to rescue a pony in need of a loving home, but it is important to ensure that a person can provide a long-lasting, healthy home.

Overall, the Rolfes’ goal is to give their minis the “happy, healthy life that they deserve,” as their little equines return their love and affection tenfold. Additionally, their barn’s visibility incites a lot of attention from the community, and Mrs. Rolfe expresses that they “welcome these opportunities as a way to educate the public about miniature horses.” They take two of their minis to elementary schools to teach kids and administrators about caring for horses, and how “it’s not just about them being cute.” They have also held a number of open houses at their barn to reach out to people, in addition to appreciation events. Recently they even participated in a parade, featuring two of their feral minis that behaved wonderfully, their gentle temperaments proving solid. While they agree that minis are too much work for some, Mrs. Rolfe asserts that “if you are willing to educate yourself and put the work in, you will be rewarded a million times over with love and gratitude. In this, I am a firm believer.” Horses big and small provide a unique kind of comfort and happiness; it is only fair that we reciprocate. 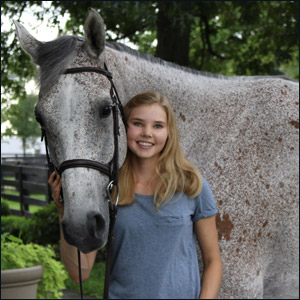