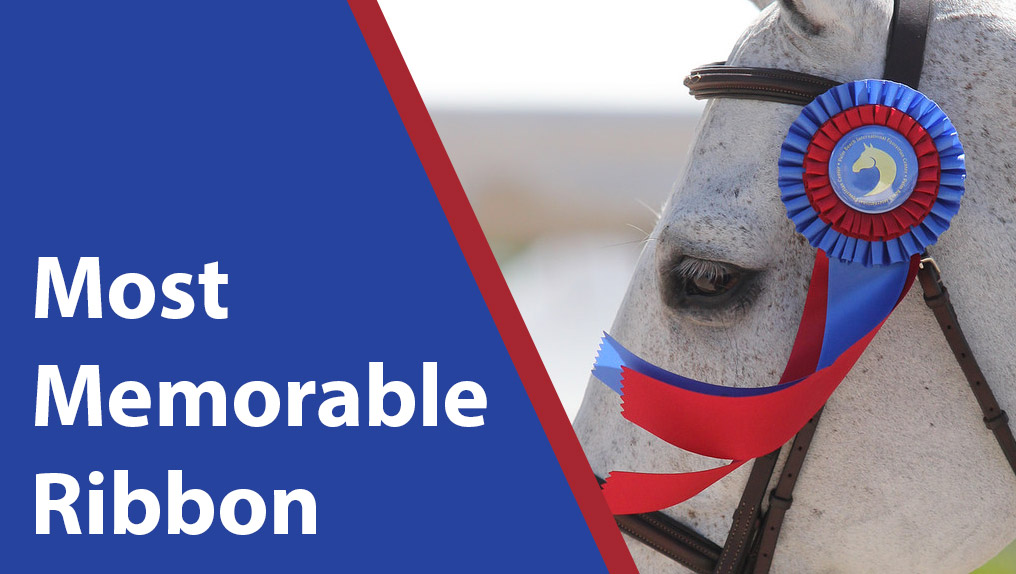 We’ve all heard it before and we’ll hear it again- riding is not just about the ribbons. While this may be true, there is an immense amount of pride in hanging up your winnings after a long day at the show. Here are some of team TPH’s most memorable ribbons.

“I won my most memorable ribbon at the Germantown Charity Horse Show in Germantown, Tennessee in 2015. I was competing in the High Child/Adult Jumper Classic, a class which I nearly won the year before by having the fastest jump off time but only a single rail down. This year I had two horses entered in it, but with over thirty entries, the beautiful ribbon, silver platter, and cooler awarded to the winner seemed just as elusive as last year. On my first ride, I completed a quick jump off, but a mistake at the last fence would cost me the blue on him. However, on my second ride, my jumper Yes Sir, and I came galloping around to the final fence determined not to repeat my error. After a rather long leap of faith, I emerged from the ring with the winning time and a clear score. We retired Yes Sir the following year, so this ribbon serves as a reminder of how special it was to ride such an amazing horse.”

“My most memorable ribbon was won at the Old Field Farm schooling show (a local show in Long Island, NY) in July of 2017. I was riding my favorite pony, Buddy, who we call the ‘World’s Best Mustang’. It was his first horse show and we were riding in the beginner hunter division, minus the last class (which was one single crossrail) because Buddy hadn’t yet “officially” jumped at that point. When the final class ended up needing to be filled, we decided to take one for the team and try our hand at the crossrail. While it may not have been the prettiest, our (slightly hesitant) little bunny hop put a smile on everyone’s face, myself included. The judge even commented on how adorable Buddy is! We finished may have finished fourth of four, but my pretty white ribbon hanging next to my desk makes me smile every time I see it.”

“My most memorable ribbon was won in 2016 at HITS on the Hudson in Saugerties, NY. It was my first trip to HITS ever and one of my very first shows with my horse, CeeCee. I had never shown in full 2’ courses, only practiced them at home, so I was extremely nervous and was not expecting to win a ribbon. During our last course of our last day showing, I finally figured out how to confidently ride through the course, even getting the correct number of strides in all of the lines. Everything finally coming together was exciting in itself, and winning eighth out of over thirty riders was the icing on the cake.”

“After six shaky shows in the 3’6” Juniors, my horse Nick and I miraculously landed ourselves in the last qualifying spot for Devon. He hardly had any experience in an intimidating show environment, and those meager six previous times we had done the Juniors the course was set generously. Nevertheless, we decided that we couldn’t skip the best show of the year. I tried to go in with no expectations, but pretending that you don’t care about the results of a national show is nearly impossible. The first two rounds were, in a word, disastrous. Faced with an overwhelming setting and a young horse, I couldn’t even boast a combined score of 80. When I walked up to check the course for the last round, I was less than ecstatic to see what usually makes Devon so superb: a huge crowd. I doubted how well my greenie could handle kids screaming at the rail, but I tried my best to give him a calm ride. The moment we finished, Nick was bombarded with pats. His bravery had landed us in the 80s, and he sported his purple ribbon with pride.”

“My most memorable ribbon would have to be my sixteenth place Pony Finals ribbon. I was riding a large pony who just came off her green year and wasn’t that experienced. Finally, Pony Finals rolled around. The model and under saddle day was rough. Eleanor and I came into the Jumping phase 14th from the bottom (126/140), so we were 14th in the order of go. In the over fences round, we pulled through and ended up 16th over fences. I was thrilled, and I will cherish that ribbon for the rest of time. I will always remember the feeling of the entire day. If you asked me, I could probably recite exactly what I said and did that day. That sixteenth place ribbon showed me that hard work does pay off and anything can happen, even what seems like the impossible. The ribbon that hangs in a shadow box right next to my bed reminds me that even in worst case scenarios, good comes out, and never give up.”

My most memorable ribbon was won at Great Lakes Equestrian Festival, 2017, on a pony named Vespa. My horse at the time, Willow, was hurt for the past six months and my trainer was nice enough to find me this Children’s Large Pony to ride at the next three shows. At GLEF, I ended up winning champion on Vespa only the second time I had ridden her, let alone shown her. Not only did that make the ribbon memorable, but the conditions I had to ride in the last day of the show stand out. It was pouring rain! The rain was coming down sideways and the ring was one big puddle. It was safe to ride in, but I was drenched right through my raincoat. It got so bad that I had to get off the pony and bring her under the big, covered pavilion next to each ring. We got through the hunter rounds and ended up with two firsts, a second and overall champion. Every time I see the ribbon I am reminded of my first time at GLEF and the crazy experience I had.

My most memorable ribbon would have to be a yellow ribbon that I won in a speed class at the Kentucky Summer Horse Show last year. We had been working on a lot of different things, and my horse Gatsby and I finally put it all together for that trip. The ribbon not only symbolizes the hard work we put in to get there, but also all the people who helped us get to where we are.