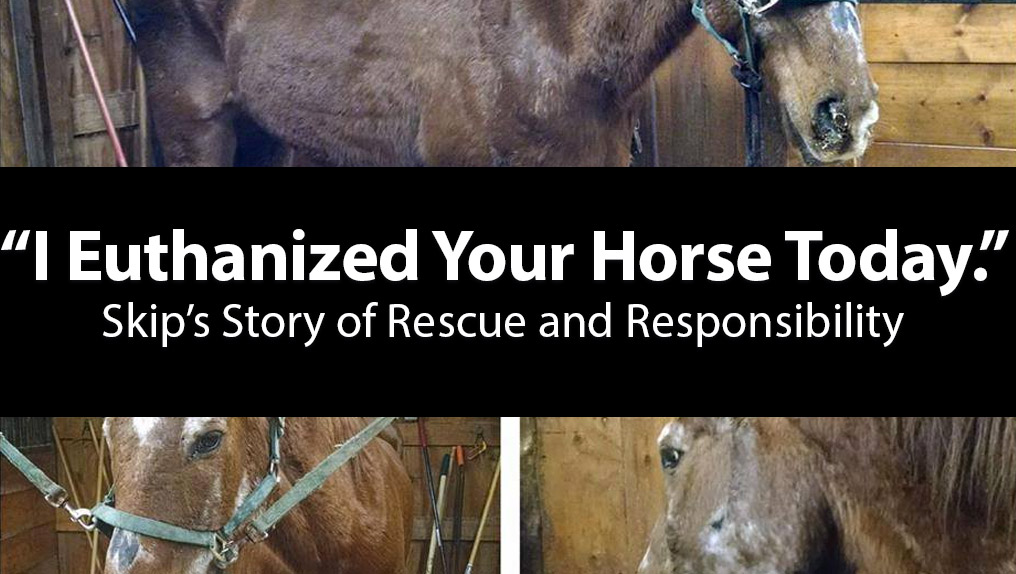 Caring and ultimately making hard decisions for senior horses is one of the most difficult, but important, aspects of horse ownership. Julie Hersey of Greenwood Stables takes that responsibility seriously.

“I have been called on numerous times to help local people who have horses that aren’t in good condition,” Julie said about her experience with rescue. A professional with over 17 years experience training and competing horses who have won at Pinto World Championships, showing isn’t Julie’s only goal. Her barn runs a large 4-H club that provides a lot of community service, both horse related and not. “Each Thanksgiving we put baskets together for our local police department, fire stations and emergency staff at local hospitals. Our kids drive around with us for a few hours Thanksgiving morning, delivering them to the first responders,” Julie said.

They’ve also taken a horse and mini donkey to visit a hospice patient in a nursing home. “That patient grew up breeding and showing Morgan horses and wanted to see a horse one last time before she passed, so we made her final wish come true,” Julie said. Her devotion to horses and horse lovers is clear through her work as a youth mentor, trainer and rescuer.

Currently, her and her support group have successfully rehabilitated over a dozen horses. One mare arrived in 2009 to the farm as a walking skeleton. “We ended up putting over 400 pounds on her and she lived another happy 18 months before needing to be humanely euthanized,” Julie said of the rescue.

Even though Julie has a lot of success rescuing, not every story has a happy ending. But the first horse she couldn’t save, Skip, would end up creating a social media response that made sure he would never be forgotten.

In the middle of December, I saw a Facebook post that got my attention. It began with, “I euthanized your horse today.” and is copied below in its entirety:

I euthanized your horse today.

You should have been the there, holding his head and giving him his last kiss. You gave him his first one when he was born on your farm nearly 30 years ago. But you weren’t there when he needed you the most. You were a coward.

He worked in your lesson program from the time he was saddle broke at 3 years old, nonstop for the next 26 years. He put a roof over your head and food on the table for your family. You bragged that he “taught thousands of kids how to ride” at your summer camp program. And, “he was so perfect that no one ever fell off of him.” I believe that. He was a really sweet horse. And the scars and rub marks on his body proved the extent of his tenure.

His old body was growing more difficult to maintain weight and he was showing signs that he was too weak to continue. It was his time to go. But you couldn’t bear the thought of euthanizing him yourself. “Saying goodbye to a great friend is hard,” you told me. So instead, you put him on a trailer, brought him to an auction and he gave you his final gesture in the form of a check for a whopping $50. You hoped he would find someone who would care for him and love him. But you told me that you knew that was unlikely. And that’s not what happened. He was bounced from auction house to auction house, dealer to dealer. He was hungry, cold, weak and scared. If any hay was given to him, he couldn’t eat it, as most of his teeth were missing. At some point during his travels, he came down with pneumonia. He was away from the only home he ever lived at and the only person he ever knew.

I knew there was something special about him, so I paid $30 to get him out of hellhole where he was and brought him home. He spent his last night in a warm stall, snuggled in a brand new blanket, with fresh hay, clean water and a grain mash. He loved the apples we gave him and sloshed them around in his mouth until he could swallow them. His fear seemed to diminish as the night progressed.

He didn’t want to get back on the trailer this morning. Maybe due to exhaustion, maybe due to fear of the unknown. Maybe he knew it would be his last ride. But he eventually loaded up like a good old boy and we headed to the hospital.

He passed quickly and quietly, with a full belly and final kiss on the nose, being held by someone who barely knew him but loved him with all of her heart nonetheless. At least more than you did. I hope you rot in hell.

May you rest in the sweetest of peaces, Skip.

I, like almost everyone who read the post, had an immediate reaction. Sorrow for this poor horse that worked his whole life to end up in an auction house. Respect for Julie, who gave him a final act of kindness he deserved. Shame for my sport, and the things some have done to animals.

When Julie first purchased Skip, she didn’t know anything about his history. “He came with one document – his Coggins,” she said. Researching his previous owner’s name, she was able to call the woman who sold him at auction and get his life story, current health and maintenance issues. “When I asked why she sold him at an auction, she simply said, ‘I have 16 horses buried here on my property.  I loved Skip so much that I couldn’t put him down.  I couldn’t bear to see his dead body.'” Julie said of the conversation.

So the choice was made to send Skip to auction knowing he barely had any molars left, couldn’t eat hay and dealers would not care for him the way he needed. Julie was polite to the woman on the phone, but admitted she would have lost it if they spoke face to face. Skip’s original owner kept his registration papers as a sentimental keepsake, and Julie kept the burden of releasing him from pain.

As for the post, it was never meant to go viral. “It was originally simply a vent on my private Facebook page, but friends insisted I made it public to share,” Julie said. The next day, it was shared over 12,000 times and viewed by 100,000 people. Now less than a month later, Skip’s story has over 35,000 reactions, 18,000 shares, and 9,000 comments. The message is clear — the horse community cares for our old soldiers, and we care about Skip.

Julie has received emails and messages from all over the world, as far as Australia and Russia. The story was even translated and shared on a horse page from the Netherlands. Many of those messages have asked Julie to release the name and contact information for Skip’s original owner, but that’s a request that goes unanswered. “I fear that they will retaliate against this woman.  Does she deserve it?  Probably.  But this story was to celebrate the joy of our short time with Skip, not to shame her,” Julie said.

Throughout the ordeal, Julie’s been through a lot. At first she was positive they could save Skip, but was saddened when the veterinarian said his pneumonia was too severe. “I cried when he was euthanized, more from anger than sadness.  I was happy he was going to be comfortable again, but devastated that such a sweet horse was treated so cruelly in the end,” she said.

As time moves on and the anger subsides, it’s important for Julie for people to take away the real message of Skip’s story: “The biggest point that I want people to know is that his life and death had purpose.  If his story stops just one other horse from being thrown away like trash, than it has served it’s point.”

Keep the Fun in Horse Shopping