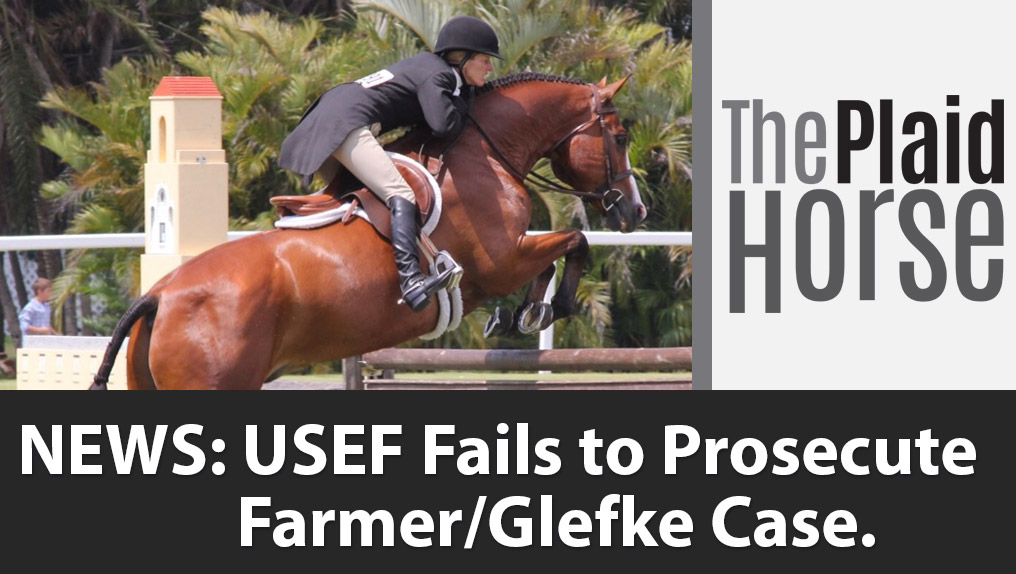 Kelley Farmer and Larry Glefke [long-time members of the United States Equestrian Federation], and their counsel, today are happy to announce that their suspensions by USEF which began on July 1, 2017, have today been vacated and the proceeding against them terminated retroactively to July 1, 2017, restoring Kelley and Larry to full and active membership in USEF as of that date. Ms. Farmer and Mr. Glefke are grateful that USEF has agreed today to take this action – reversing their previous suspensions and dropping the case completely – but have issued this statement to clarify what has happened over the last year.

For the last year, Ms. Farmer and Mr. Glefke have been convinced that the USEF GABA samples in this case were flawed and scientifically unreliable, at least as to their horse’s tests in this matter. This was based on their never having administered GABA nor allowed it to be used with their horse and the aberrant test results. Through counsel they have sought detailed information about GABA and the laboratory tests on their horse. Although complete records were not immediately available before the USEF Hearing in June 2017, what evidence could be collected demonstrated a huge disparity in the GABA level detected in their horse’s samples, which called into question their test results. The USEF Hearing Panel rejected the then-available evidence in June 2017, but Farmer-Glefke continued to press USEF and its lab in the following months for additional information about what lead to the aberrant lab testing results. In December and early January 2018, the additional evidence collected during the Arbitration proceeding was presented to the impartial Arbitrator from the American Arbitration Association reviewing this case. On January 3, 2018, that Arbitrator – Mr. Lawrence Saichek, reversed his previous ruling in favor of USEF and ruled that that evidence had convinced him that Farmer-Glefke would likely prevail in their challenge to the suspensions. Accordingly, he lifted the suspensions immediately until the final hearing could be held in February.

Today, USEF has accepted Farmer-Glefke’s compiled evidence of errors that occurred in its laboratory and agreed to completely and immediately rescind the suspensions of Ms. Farmer and Mr. Glefke and drop the case against them in its entirety, effective as of the original date of the suspension, July 1, 2017.

Even more importantly for USEF and its many members, USEF also announced that it was going to conduct “a thorough compliance audit of the laboratory” and pledged that it will take “any necessary corrective action” to ensure that what happened to Ms. Farmer and Mr. Glefke never happens again. Ms. Farmer and Mr. Glefke greatly appreciate USEF’s planned corrective actions that should lead to a better laboratory process which ensures fair regulation and makes the treatment they have received for the last year impossible in the future for other USEF members to have to endure.

Kelley Farmer and Larry Glefke thank their legal team [listed below] who worked tirelessly over the last year to build their case that showed errors in USEF’s lab procedures related to their samples, which the Arbitrator provisionally accepted on January 3, and which USEF accepted today.