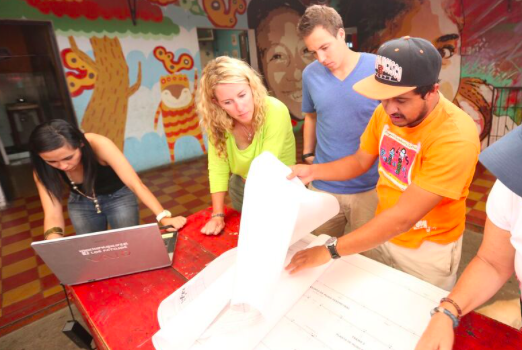 From the age of five when she began competing in the pony hunters to her first international Grand Prix at sixteen, Jessica Newman worked every day to master the equestrian sport. Towards the end of her riding career, Newman found that she had a calling. “I started to realize that there was a lot more out there and that I was living in a very privileged circle. I’d done everything I wanted in the sport as a competitor and had been fortunate to so do. It was time to dedicate my life to doing something for others, not just focusing on my own goals.” At the age of twenty-two, Newman decided to quit riding and delved into humanitarian work, eventually founding JustWorld International in 2003. Through her network in the equestrian world, other riders began to see that together, everyone can do their part to help others in need. Passionate supporters of the nonprofit organization JustWorld International began working towards the common goal of breaking the cycle of poverty for children by giving them the tools and opportunity to become positive leaders in their communities. For the past fifteen years, hundreds of Rider Ambassadors and supporters, including juniors, amateurs, and professionals from around the world, have changed thousands of children’s lives. JustWorld currently works with local NGO’s in Cambodia, Guatemala and Honduras to help sustain education, nutrition, health and hygiene, and leadership and cultural development programs for children with little opportunity to receive support from other sources.

Since its inception, JustWorld International has grown tremendously. While reflecting on the organization’s growth and success, the raw data speaks for itself. JustWorld International is proud that two of its partners’ founders have been recognized as  CNN TOP 10 Heroes, proving that their strategy of working with local NGO’s to support multiple pillars of change is effective. This year alone, JustWorld has given more than 6,500 children the tools they need to finish primary school and served more than 200,000 meals. After adding the combined attendance at the projects over the past fifteen years, JustWorld has reached more than 40,000 children, providing opportunities for students to pursue careers and higher education. While the growth of JustWorld has been remarkable, JustWorld and their supporters are not stopping now and have big plans including a new Executive Director, Mei Mei Newsome. JustWorld Founder Jessica Newman announced this exciting news at the 15th Annual JustWorld Gala on January 12, 2018. Newsome has been deeply involved with the organization for ten years and previously served as Volunteer Managing Director for three years. Newman shared, “She is committed to JustWorld and I believe the right person to take what I started and grow it beyond what any of us could hope for.”

Through JustWorld’s amazing team and group of supporters, Newsome vows to continue JustWorld’s mission of empowering more children each day to create a more just world.  There have been many exciting changes and expansions at JustWorld’s current partner projects which will continue to positively affect the communities they serve. People Improvement Organization (PIO) in Cambodia finished construction of their third new school and the mobile library project doubled its reach, bringing educational activities to more than 5,000 children in Tegucigalpa, Honduras. JustWorld’s partner in Guatemala finished their bakery project, which will be invaluable to the teenagers and young adults participating in vocational training at the school, preparing them to be responsible citizens and giving them the tools to start their own local small businesses. Under Newsome’s leadership, the JustWorld staff, volunteers, and supporters are excited to continue to make a difference in Honduras, Cambodia, Guatemala and now Belle Glade. Jessica Newman will focus her energy on further developing the charity through her role as President of the Board. Equestrians will begin 2018 with renewed hope and energy to provide more meals, more books, more classes, more hope and more opportunity. Together, they will take that same spark that ignited this journey and fuel their desire to be the change they seek in the world.

For more information or to find out how you can get involved, visit the JustWorld International website, www.justworldinternational.org.