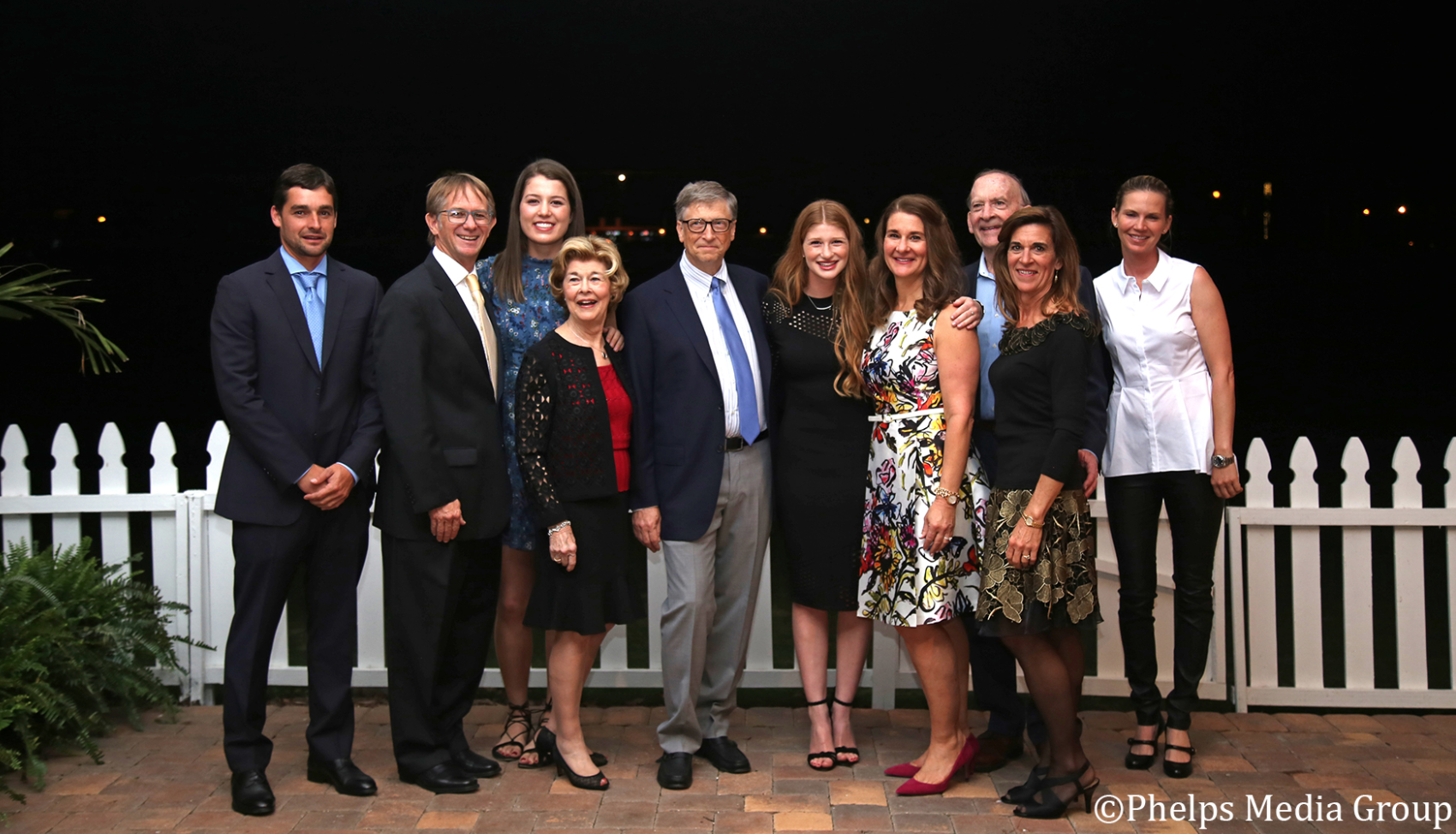 “Triumph in Tryon” captured all of the elements of an amazing evening. The tent was transformed into a festive woodland wonderland, representing the mountainous region of Tryon, North Carolina, where the 2018 WEG will be held, and included an exquisite dinner. USET Foundation executive director Bonnie Jenkins and the gala committee members all helped organize the highly successful event.

The evening began with a cocktail hour generously sponsored by Taylor Harris Insurance Services from 6–7 p.m. when guests were invited to make their way to the elaborately decorated tent for dinner and to begin the evening’s program.

Master of ceremonies Brian Lookabill kicked off the festivities welcoming attendees to the event, while McNerney delivered the keynote address, recognizing guests for their dedication to the sport as the USET Foundation prepares for the 2018 WEG. McNerney closed his speech paying tribute to the legendary Bill Steinkraus, who passed away in November 2017, and his impact on the sport with a beautiful video montage of his accomplishments and highlights from his outstanding equestrian career.

Later in the evening, the awards ceremony began with 21-year-old Jennifer Gates of Medina, Washington, being named the recipient of this year’s Lionel Guerrand-Hermès Trophy, which is presented to a young rider in one of the Olympic disciplines who exemplifies both sportsmanship and horsemanship. In 2017, Gates had a breakout year by definition, representing the U.S. and competing on her first Nations Cup team in Slovakia, winning the $25,000 U.S. Open Hollow Creek Farm Under 25 Grand Prix at the Rolex Central Park Horse Show and claiming the Under 25 National Championship and placing fourth in the Longines FEI World Cup™ Jumping Lexington CSI4*-W at the National Horse Show.

The next award was presented to McLain Ward of Brewster, New York — the recipient of the Whitney Stone Cup. The award is presented annually to an active competitor who displays consistent excellence in international competition and high standards of sportsmanlike conduct, while serving as an ambassador for the United States and equestrian sport and exemplifying the team’s highest ideals and traditions. Olympic gold medalist and 2017 Longines FEI World Cup™ Jumping Final champion, Ward helped the U.S. team earn multiple podium finishes at some of the most prestigious international events, while his top mount, HH Azur, was also recognized for jumping clear in all U.S. team competitions throughout 2017.

The final award, the R. Bruce Duchossois Distinguished Trustee Award, was presented to Jane Forbes Clark — created in honor of the late horseman, Bruce Duchossois, who had an extensive impact on the equestrian community. The award is presented annually to a USET Foundation trustee who exemplifies exceptional leadership, philanthropy and character. For almost four decades, Clark has been an active supporter of multiple disciplines and has sought to help the U.S. achieve greatness in equestrian sports worldwide. Clark served as the president and CEO of the USET Foundation for many years and has exemplified her generosity by the countless opportunities she has afforded U.S. athletes.

Following the awards presentations, the USET Foundation surprised the Harrison family with a special painting of Ward and HH Azur to honor and celebrate the life of USET Foundation trustee and owner of Double H Farm Hunter Harrison, who passed in away in December 2017.

Next, auctioneer Jonathan Cuticelli of Racebrook Gala Auction Services took control of the microphone and revved up the crowd to begin the live auction, which helped raise money for U.S. equestrian teams competing at the 2018 WEG. Auction items included an original oil painting and custom oil portrait by artist Sharon Lynn Campbell, a summer getaway to the “Thistle House” in Martha’s Vineyard, donated by Mr. and Mrs. William H. Weeks, the choice between three exclusive Rolex VIP sporting experiences, donated by Rolex Watch USA, three WEG VIP hospitality packages for eventing, dressage and show jumping, donated by the 2018 FEI WEG Organization, Mark and Katherine Bellissimo and the USET Foundation, and two box tickets to Springsteen on Broadway with meet-and-greet passes and goody bags, donated by Bruce Springsteen and Patti Scialfa.

The evening concluded as guests danced the night away to live musical performances from the band Soul Survivors.

“Triumph in Tryon” proved to be wildly successful for the USET Foundation, thanks to the generosity of the guests and auction donors who helped raise crucial funds for the USET horses and riders as they prepare to compete at the 2018 World Equestrian Games at the Tryon International Equestrian Center Sept. 11–23.

The USET Foundation is a nonprofit organization that supports the competition, training, coaching, travel and educational needs of America’s elite and developing international and high performance horses and athletes in partnership with US Equestrian.

For more information on the USET Foundation, visit www.uset.org.

You Can’t Hide from a Horse – Understanding Equine Assisted Therapy

The Story Behind Kraft Horse Walkers