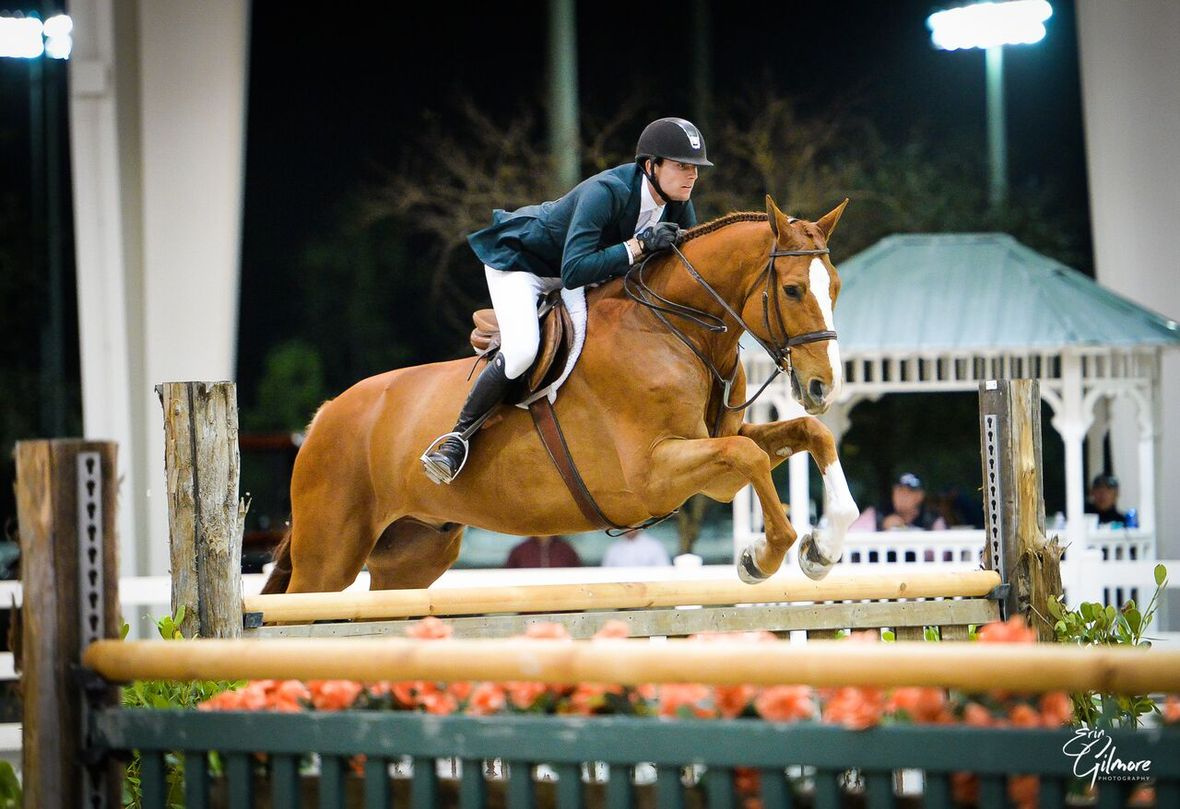 West Palm Beach, FL (January 30, 2018) – It was a day for the chromey chestnuts during the second week of Hunter Derbies on the Palm Beach Series, as Geoffrey Hesslink and Cadoretto once again topped The Ridge’s $15,000 USHJA International Hunter Derby, and Patricia Stovel and Pancaspe rode to victory in the $5,000 USHJA National Hunter Derby. With both classes held on Friday, January 26 at Jim Brandon Equestrian Center, a healthy group of spectators and trainers gathered to watch both the afternoon National class and evening International class, while full divisions of hunters, jumpers, and equitation classes ran from Wednesday-Sunday at Jim Brandon.

Hesslink continued to build on his already impressive hunter resume with a second win in The Ridge’s International Hunter Derby. Under the guidance of trainer Andre Dignelli of Heritage farm, he and Cadoretto, known around the barn as Cad, topped both rounds of the night class, successfully tackling all of the questions asked by course designer Archer Bailey. “He is just so honest,” said Hesslink. “Anything I ask of him, he does it; any mistake I make, he covers for me. Going into the handy I began to doubt my plan, which was to take an ambitious line to one of the larger options. But that is his better lead and as usual he did it without hesitation and was absolutely perfect. Surprisingly, I think he was even better this time than the last time [at The Ridge].”

As for the next steps, Hesslink says he has no intention of stopping now. “We will probably do the Derby next week in the International arena at WEF, and the one at Deerridge as well,” he stated. “I really love The Ridge and their shows because of the facility and the quality of the courses and atmosphere. It feels really special to show under the lights, and I think Cad definitely enjoys and jumps better in this atmosphere. Of course we will plan to come back for the last of The Ridge’s Hunter Derbies in mid-March.” Earlier in the day, a mare that could be Cadoretto’s stunt double worked the $5,000 USHJA National Derby, coming out on top with Patty Stovel in the irons. The 10-year-old American-bred Hanoverian is fresh off her first shows with Stovel in the 3’3″ Pre Green Hunters in November, where she also won a Derby in Ohio and was champion in Ocala. Owned by Virginia Bartholomew, Pancaspe’s somewhat green status didn’t slow her down a bit over the National course.

“She hasn’t done too many horse shows,” said Stovel of the chestnut mare, “but she has always been just so straightforward and easy, even as a pre green horse. After our good results in Ohio and Ocala, we decided to venture down to Wellington for a few shows and these are a perfect match, both for her and so her owner could be on hand to see her progress. I didn’t want to be super handy with her, as she is still pre green, but we just focused on turning and always looking towards the next jump.”

As a veteran of the hunter jumper ring, Stovel’s history with The Ridge stretches back to founder Nona Garson’s days with Olympic mount Rhythmical, and she also frequents their spring, summer, and fall shows in New Jersey. “I’ve been coming to The Ridge for years, and they’re always so friendly and great to work with,” Stovel said. “The course was beautiful, and the warm ups and covered were lovely to ride in. I couldn’t be happier with our choice to come or Pancaspe’s performance, and we are looking forward to attending more of The Ridge’s shows!”

Full results and entries for all of The Ridge’s Palm Beach Series and Wellington Turf Tour shows are available at HorseShowing.com!