Home Blogs From the Ashes… We Will Rise 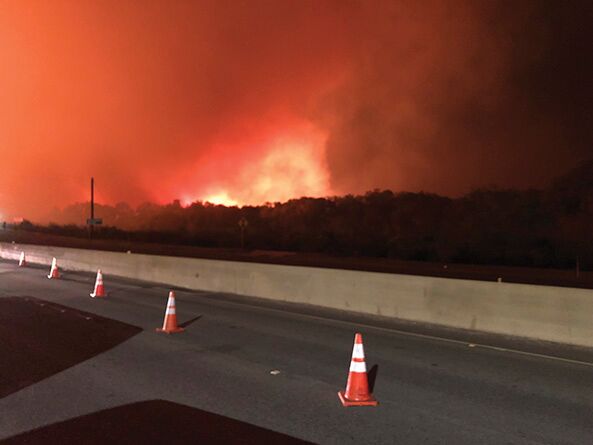 “Not a hero. Just there for our community as it has been there for me!”
Leslie Steele on praise for taking in horses displaced by fires.

Johavany Catalan was in charge of 77 horses at the San Luis Rey Downs racehorse training facility in Bonsall, CA when the Lilac Fire broke out. Now, he and his crew have nightmares about it. The crew was finished for the day and about to head out when the wind shifted and the unthinkable happened. In a matter of minutes, San Luis Rey Downs, training facility for over 500 Thoroughbreds, was engulfed in smoke and flames. Humans ran into the burning barns to rescue panicked horses. In an effort to rescue as many as possible, they turned the horses loose and chased them into the infield of the racetrack. Mares, stallions, geldings – all running in fear for their lives. It took days to find those that survived. The toll on animals and humans alike is immeasurable as the scars run deeper than melted skin.

Equally as tragic as the equine toll is the extensive loss to humans in the California wildfires. Hundreds of people lost their homes, barns, and possessions. Many of the backstretch workers at the training facility lost everything they owned and suffered extensive injuries trying to rescue horses. The Plaid Horse staff sends out our heartfelt condolences to all those that were affected by the fires and applauds all of the volunteer efforts on behalf of horses and humans alike.

Middle Ranch was home to Archie Cox’s Brookway Stables and Dick Carvin and Francie Steinwedell-Carvin’s Meadow Grove Stables.  Cox’s barn was partially destroyed, while the Meadow Grove barn was completely burned. Steinwedell-Carvin commented, “We’ve been there at least 20 years in that same barn and 25 at the same place, and we’ve just been so lucky. We’re really grateful that no one got hurt and all the horses are good and the people are good. We’re just tired, but that’s nothing.”

The Napa Community Animal Response Team coordinated the rescue efforts for the area affected by the North Bay fire. The group was formed after the catastrophic Valley fire in 2015 revealed a lack of readiness in this type of emergency. The group of over 300 volunteers rescued more than 200 horses. The effort included local restaurants feeding volunteers, veterinarians, trailer drivers, hay deliveries, and horse caregivers.

“Please if you are Spanish speaking and Psychiatrist or Psychologist please come to Delmar and talk with the racetrack grooms. Lots of nightmares and people still shaking. Help needed from healers too.” Tweeted by Julie Krone, Hall of Fame Jockey