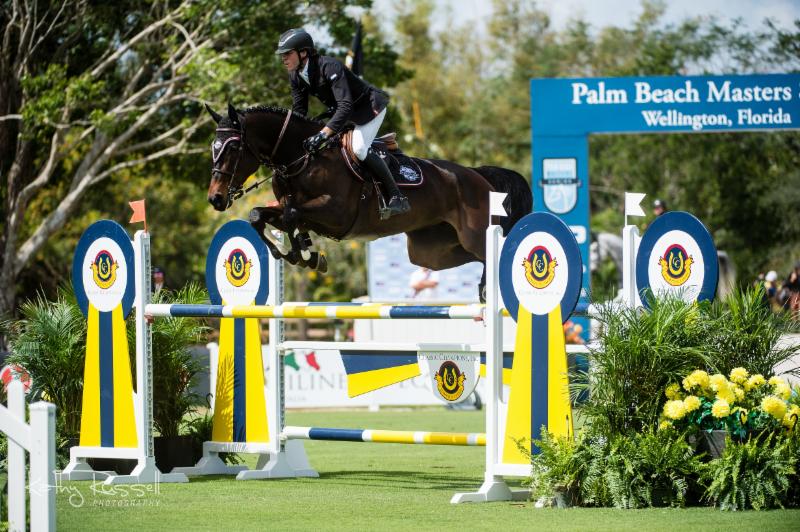 Irish rider Senan Hayes piloted New York BC, owned by Blue Chip Bloodstock, to victory in the opening event of the 2018 Deeridge Derby, the $2,500 Classic Champions 5-Year-Old Jumper class.  The class was judged a bit differently than most; in addition to their performance over the obstacles, the youngsters were judged on quality of canter, rideability and their overall jumpability. New York BC, by Presley Boy, who competed successfully at the international level under the Mexican rider Jamie Azcarraga, and out of McLain Ward’s gold medal Olympic mount Sapphire, is true show jumping royalty and showed his potential in this spotlight class.

“He did a bit as a four-year-old,” said Hayes. “I am very happy with him and the way he handled all this, there is a lot to look at here. He is very brave and scopey, all the things that you look for in a horse. It is a great experience for him to get in a ring like this. They need to see a lot of different rings like they do in Europe. He is a lovely horse.”

Annie Oakley, owned by Carben Farms LLC, took the win in the $3,500 Classic Champions 6-Year-Old Jumper class. Ridden to victory by Benjamin Meredith, who was born in the US but speaks with an Australian accent as he spent his formative years in that country before returning to the US, the 15.2 hand mare handily conquered the course designed by Frederic Cottier, who designed the courses at the 2014 FEI World Equestrian Games in Normandy.

“She is a little rocket” said Meredith with a chuckle. “This was a great class for her. We don’t show her too much, I think she has done about 16 classes in her life. Every time she goes in the ring she likes to go clear so we like to save her for these types of classes. This is the second time I have done the Classic Champions classes here at Deeridge, she loves it here. The Jacobs family puts on an amazing spectacle and it’s a pleasure to ride here.”

The Classic Champions $6,500 7-Year-Old Jumper class was won by Argentina’s Bruno Passaro aboard Chaccala for owner Michael Meyer. The pair took top honors in the Power and Speed competition with a clear round in the Power phase and a time of 30.190 seconds with no faults in the speed phase. Andrew Ramsay and Shalanno Farms LLC’s Gerlo placed second with double clear rounds in a time of 31.690 seconds.

Created in 2015 by Cynthia Hampton, Classic Champions Tour is specifically for 5, 6, and 7 year-old jumpers and is based on European principles which modernise the show experience for young horses in North America. Created by experienced, specifically-trained course designers, the courses are made to fit horses’ age with adapted heights, types of fences, lines, and turns, all over top-notch footing, which is a trademark of Deeridge Farms. The series gives young horses the opportunity to compete at different shows to develop their experience and it helps them become the future stars they can be.

“My goal is to offer adapted classes and also to educate riders, trainers, breeders, course designers, judges and officials,” said Hampton. “We need a viable structure capable of identifying, selecting and educating future high level horses. I believe that we can breed and develop future athletes capable of distinguishing our region both at home and on the international stage.”

“We think it’s extremely valuable for young jumpers to get the best education and show experience possible right from the start, which is why we are delighted to include the Classic Champions classes at our shows,” said Lou Jacobs, event co-founder along with siblings Charlie Jacobs and Katie Robinson. “It’s always exciting to watch as young horses start their careers and develop through the levels.”

The Classic Champions Tour concludes at the second annual Deeridge Derby on Thrsday. The young horse classes are non-USEF rated, held in Deeridge Farms’ beautiful grass Grand Prix Ring, and offer $40,000 in prize money. In addition to the general results, the judges of Classic Champions Tour will reward one horse per generation with the “Classic Champions Award of Distinction.” The goal being to highlight jumping style, quality of canter and rideability.

About the Palm Beach Masters Series and Deeridge Farms

The second annual Deeridge Derby, February 28-March 4, is a USEF premier-rated show where the nation’s most elegant hunter horses and ponies take center stage to compete in prestigious classes including the $5,000 USHJA National Open Hunter Derby, $5,000 USHJA Junior/Amateur Hunter Derby, $2,500 USHJA Pony Derby and the highly competitive $50,000 USHJA International Hunter Derby as well as the Classic Champions Tour series of classes for young horses. General Admission tickets ($20 per ticket) are now available through Eventbrite for the Deeridge Derby at www.palmbeachmasters.com/event/deeridge-derby/.

The 2018 Palm Beach Open, March 22-25, is a USEF rated Jumper 2 show that offers classes at a wide range of course heights ranging from .95 to 1.40 meters as well as the Classic Champions Inc. young horse classes and offers just under $100,000 in total prize money.

All events are hosted at the spectacular Deeridge Farms, situated in the heart of North American equestrian sport in Wellington, Florida. Award-winning landscaping surrounds the custom-built show grounds and the facilities that host the Palm Beach Masters Series. There is perhaps no location more intimate or stunning to host the highest levels of equestrian competition.

Further information on the Palm Beach Masters Series is available on line at www.palmbeachmasters.com.

Further information on Classic Champions Inc. and its classes for young jumpers is available at www.ClassicChampionsInc.com.