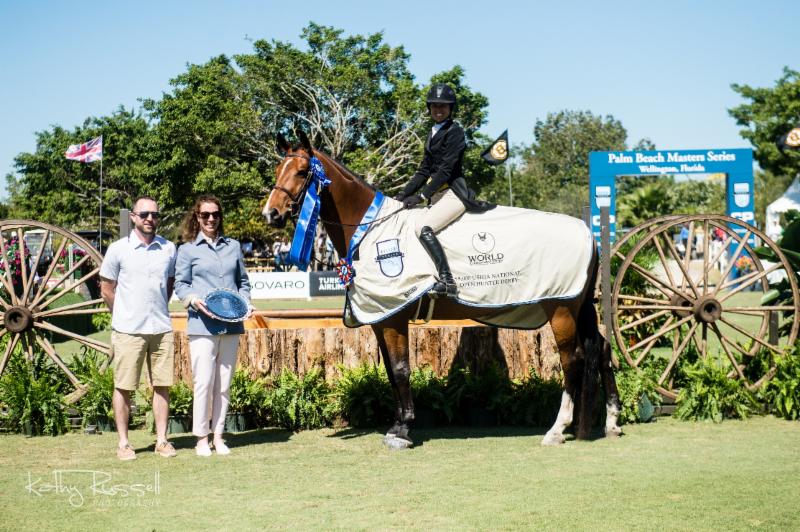 Wellington, FL – March 3, 2018 — The majesty and grace of some of the world’s best hunters were on display at the Deeridge Derby, part of the Palm Beach Masters series at Deeridge Farms, a spectacular world-class venue in Wellington, Florida.

Liza Boyd and Clemens, owned by the family’s Finally Farm, won the $5,000 World Equestrian Center USHJA National Hunter Derby in convincing style. The pair had the highest score in the first round over the Steve Stephens designed course, garnering a 92 and then topped that off with a 93 in the second round. There was no question about how well they had done as they finished the final round, as Boyd’s father, Jack Towell, enthusiastically voiced his pleasure for all to hear. Boyd adds this victory to her more than 25 USHJA International and National Hunter Derby titles. With her famous mount Brunello, she won the 2013, 2014 and 2015 USHJA International Hunter Derby Championships.

“Clemens is an up-and-coming Derby prospect that I am really excited about, he may even be my next Brunello,” said Boyd. “The course today suited him. Steve Stephens and I get along really well, I just love the way his courses flow. He gives you a lot of bending lines that allow you to gallop; they are very inviting. The grass rode beautifully, the jumps were excellent, it was a really great experience for an up-and-coming Derby horse. I couldn’t be happier.

“He did the Derby Finals last year, but because he is not super seasoned on the grass, I wanted to take advantage of this National Derby and of this venue on the grass with the goal of building him up for the International Derbies. It is so nice to come here and have a one ring venue for the horses. I got to spend a little extra time with him. That is always an advantage.”

Maria Rasmussen and Hobbs Lane had to settle for second place even though they received great scores from judges R. Scot Evans and Robert Crandall including a 94 in the second round, a score that topped everyone including Boyd and Clemens. They were the first competitors on course for the first round and held the lead for more than half the class with a score of 88. Hobbs Lane, owned by Sunset View Farm, entered the Handy round in third place and laid down an amazing trip. Taking every option, they earned 94 points and reserve honors.

Wisdom, owned by Temple Equestrian, and ridden by 13-year-old Grace Debney, took top honors in the $5,000 Equiline USHJA National Junior/Amateur Hunter Derbywith a two-round score of 179.0 pints. The pair, who have been together less than a year, scored 89.0 in the first round and 90.0 in the Handy round.

“This is my first big Derby,” said Debney. “I did a few small Derbies on ponies, but this is the first on a horse. It was so much fun, especially in a big ring like this. He is such a good horse, he just does it perfectly. He helps me out a lot. He has the best canter ever. When I tried him, that was what I really liked. He is easy to see a distance off of and he really tries all the time. He gives me a great experience every time I ride him.”

Charlotte Currey and Tomcat, owned by her grandmother Agneta, placed second in the class. The had a score of 88.5 in the first round and followed that up with an 85 in round 2 for a total of 173.5.

Daisy Farish and Meralex Farms’ Cinemagic, who won the judged Warm-Up event on Friday, looked like they were heading to the winner’s circle again after the first round, where they were awarded the leading score of 94 points. Things did not go as smoothly in the handy round, and they finished with a score of 78, and an overall third place.

Private Practice and Victoria Colvin were exceptional in the $50,000 USHJA International Hunter Derby Round 1, taking the lead with a score of 194. Due to fading light, the last six of the 55 entries will have a chance to ride their first round on Sunday morning starting at 7:30. The top 24 will return to put their skills to the test in the Handy Round on Sunday at 2:00 p.m.

Charlotte Jacobs continued to dominate the 1.30m Jumper division, winning for the second straight day, this time aboard North Star’s Bartani S. The pair turned in two fault-free performances with a jump-off time of 29.919 seconds to claim the win. Jacobs also finished fourth on her winning mount from Friday, Darthus.

Utah Du Romois and rider Riley Mackillop won the 1.25m Jump-off class for owner Jorge Verswyvel. They were double clear in a time of 32.470.

Quatar Des Etisse, owned and ridden by Taylor St. Jacques, won the 1.10m Jump-off class in decisive fashion. The combination left all the fences intact in a time of 34.476, a full three seconds faster than the rest of the field.