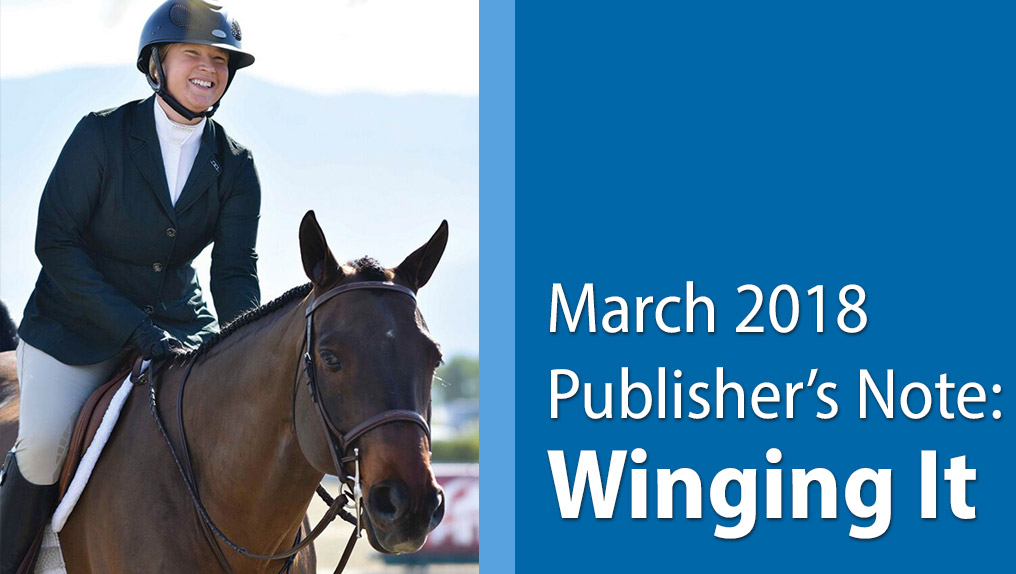 Earlier this month, as I was explaining to TPH Editor-in-Chief Sissy Wickes one of my latest harebrained ideas, she said, “Okay, but if you do that, you can’t just wing it. You have to prepare.”

Well, those of you who spend time with me know (and obviously Sissy did too) that of course I was planning on winging it. Winging it – winging anything – is literally one of my greatest skills. Winging it requires being in the moment, a broad base of experience and knowledge to pull from, and the ability to believe in yourself to an almost irrational point. My biggest successes have all come from a starting place of winging it. When people ask me why or how I did something or how something came about – I have nothing to offer. Other than that I have been preparing my whole life for how to wing it better.

So, what is the step after winging it? When the shine is off and the real work is grinding, what then? After you’ve found 8, what happens when you start looking to find 16 or 32 jumps, and on multiple horses? I spent most of the first year at the helm of this magazine feeling like the final sequence of The Graduate. I was the dog that chased the car, but then caught it. Now what?

The answer is always the same – there are two choices. You can drop it and say your winging it win will have to suffice for now, or you can buckle down and do the homework you neglected the first time. Put in the hours, days, years, and truly master it. For the magazine, I instantly chose the latter and have made it my priority and focus for almost four years. The substance is now fully behind the initial winging it and this small media conglomerate is the fruit of my labor.

My own riding, however, has always been more tricky. Given that it is my hobby and not my profession, it has more taken the first option. I have had opportunities to ride here and there and always put one foot in the stirrup and winged it. I tried to work out more in between and always dressed the part. I visualized and worked on my mental skills during those long car trips or winter days in Canton. But, what it always came down to was arriving at a show and convincing myself that I could jump the jumps – and then doing it.

Every year, I have tried to be slightly more serious. I puttered around at local competition for a couple years and made my amateur rated debut in 2016 at Thermal, showing twice. Both times successfully winging it. In 2017, I pushed a bit more, adding to my show at Thermal a few locals, the Maryland Horse & Pony Show, and Royal West in Calgary. Different horses, different training, with one common theme – the winging it was real. I only rode the day before or morning of and confronted all the riding issues I could face in the matter of a few dense hours.

This year, however, something changed. I have been able to ride the same horse – Don Ameche – through several weeks of showing. It is a completely different type of mental toughness – to make mistakes and live with them and revisit them the next week. The slate is not washed clean. I have data, I have experience, I have wisdom from great training in a variety of situations to pull from. And, most fundamentally, I have hours and I have practice. It is the direct opposite of winging it. The amount my riding has improved since I arrived at Coachella this year is immeasurable – I feel confident, calm, and prepared every second in the saddle.

After many years of putting myself out there and picking up all the pieces and nuggets of training here and there, I am finally building the core blocks to ride correctly and substantially. With skills that will serve me on every horse I ride from here on out, I am on the right path, the prepared path – a slow path. Wherever it may lead, I follow breathlessly, my heart beating with every hoof beat.

Getting to Compete at Capital Challenge is a Gift for Dana...