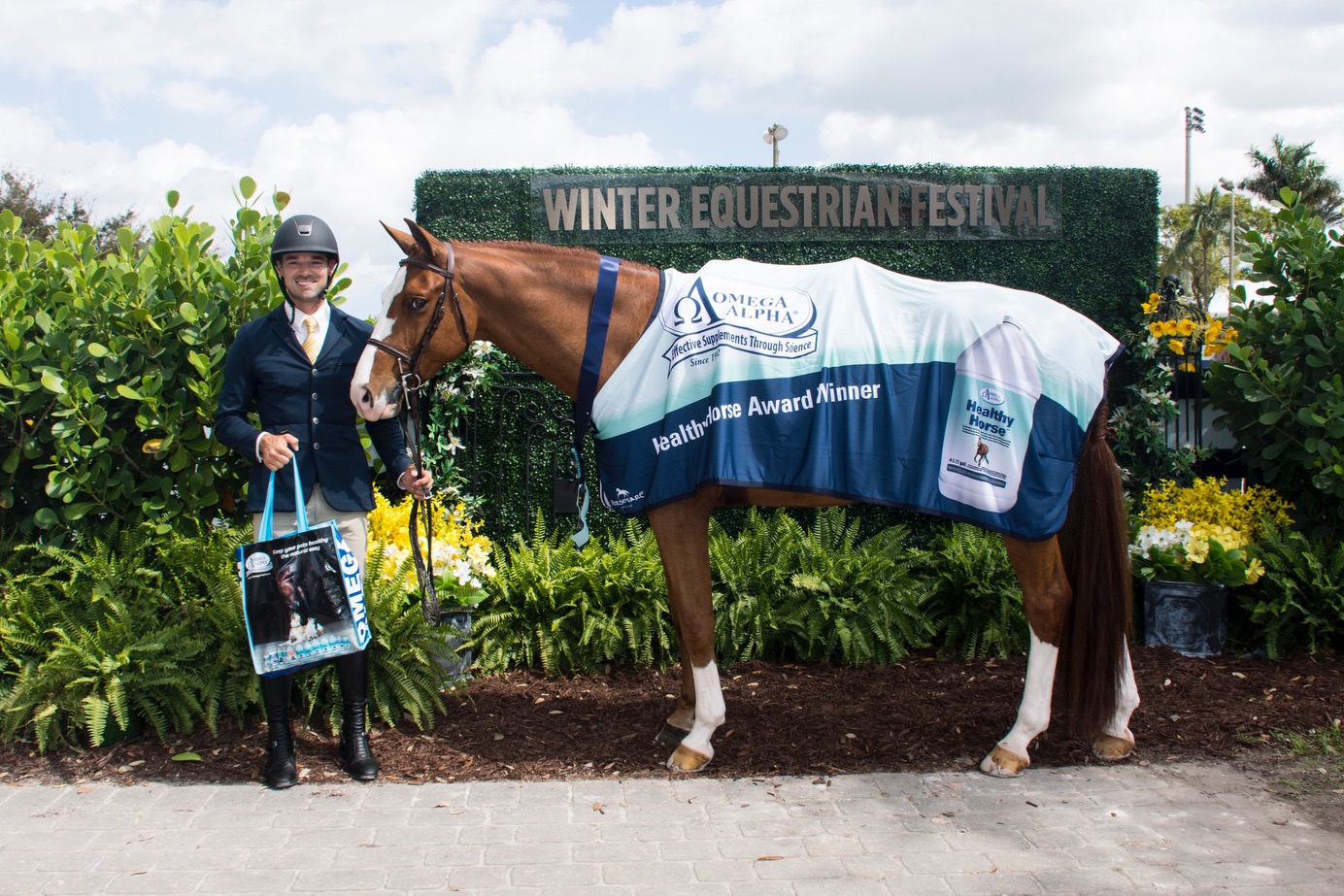 Pacific, ridden by Josh Dolan and owned by Brandi Doak, won the Award for week eight.  Pacific, a dashing chestnut Warmblood sired by Providence, has just recently started his show career in December 2017. “He’s still inexperienced,” said Josh, “having shown just five times.” Currently competing in the 3’3” Pre-Green Hunter Division, Josh and Pacific have their eyes on the Pre-Green Incentive Finals in Lexington later this year.

Josh rides with trainer Alex Granato at Mad Season, LLC. And is involved in horse acquisition and development. The team reside in Florida for half the year, and in Lexington for the other half. Josh is also the founder of The Peeps Foundation, a 501(c)(3) non-profit organization dedicated to rescuing and rehoming miniature horses.

Part of the appeal for Josh to ride Pacific is his personality.  “He’s funny and quirky, but easy going. We have a Mini rescue non-profit and Pacific is obsessed with the Minis.  He’s always wants to get out of his paddock and in with the Minis.”

Josh says Omega Alpha products are well-known at his farm.  “We’ve been using them for about four years. We use Chill for the hunters, and for our special needs Minis, we use Equine Anti-Flam.”

Quadrolino, ridden by Jacqueline McQueen and owned by Holly Calantoni Houser, received the Omega Alpha Healthy Horse Award for Week 9. Quadrolino (Quadroneur x Joane II), is a handsome bay Brandenberg gelding. Trained by Kevin McQueen, the team has been competing in the 3’3” Performance Hunter Division. Said Jacqueline, “He’s doing really well in the 3’3” Performance and I hope to move him up to 3’6”.”  Jacqueline also hopes to compete with Quadrolino in the USHJA International Hunter Derby in April.  To see more follow this link https://www.youtube.com/watch?v=Ps8jFOr3DH

When not on the horse show circuit, Jacqueline McQueen is the Assistant Trainer at Mill Stone Farm in Asbury, New Jersey. Jacqueline says that she and Quadrolino have grown together and that’s really important to her. “He’s so sweet.  Whatever I ask him to do, he’s willing to do.  I’m so lucky to have this partnership,” said Jacqueline.

Though she has not yet used any of the Omega Alpha products, she is very excited to try them.  Nodding to Quadrolino, she said, “And he’s looking forward to the bag, so he’s excited to try it, too.”  To see more follow this link https://www.youtube.com/watch?v=JUCkDz48Ufs

Omega Alpha, based in Toronto, Canada, spends the winter in the Sunshine State to reward riders from around the world who view quality horse care as a top priority. Winter Equestrian Festival competitors who demonstrate outstanding equine health will continue to win the Omega Alpha Healthy Horse Award throughout the rest of the show season.