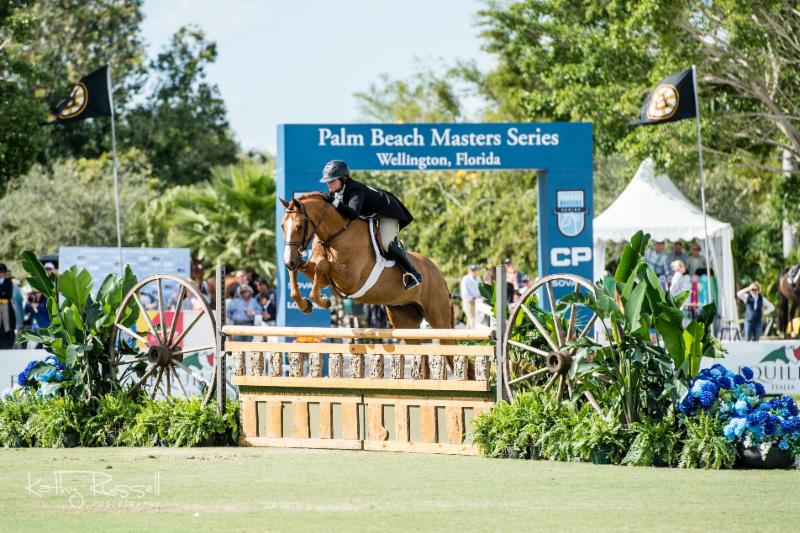 Wellington, FL – March 07, 2018 – The 2018 Deeridge Derby, the second of three events in the 2018 Palm Beach Masters Series, proved to be an unqualified success with competitors, trainers, owners, and sponsors all raving about the phenomenal event at Deeridge Farms in Wellington, Florida.

The world-class event also featured the Classic Champions Tour with classes specifically for 5, 6, and 7 year-old jumpers. Classes are based on European principles which modernize the show experience for young horses in North America. The young horse classes offered $40,000 in prize money and were also held in the grass Grand Prix Ring with age-appropriate courses designed by Frédéric Cottier of France, an Olympic bronze medalist and course designer at the 2014 FEI World Equestrian Games™ in Normandy, France. The horse show also held a range of other jumper classes in the Deeridge Jumper Ring.

“It’s so beautiful here!” said a delighted Colvin. “It’s my second year here and it’s great to be able to jump on grass. The footing was excellent and it was a blast to be in a big galloping field that feels just like the old-style hunters. What a wonderful opportunity to be able to show at a venue like this!”

Liza Boyd, winner of more than 25 USHJA International and National Hunter Derby titles, won the $5,000 World Equestrian Center USHJA National Hunter Derby in convincing style aboard Clemens, owned by the family’s Finally Farm. “The grass rode beautifully, the jumps were excellent and it was a really great experience,” she said. “It is so nice to come here and have a venue that is so good for the horses. I really couldn’t be happier with our experience here.”

Jesse Smith, who won the $7,500 Turkish Airlines 1.30m jump-off class on Chambery 25, said, “The experience could not have been any better. Everything was outstanding-the footing, the stabling, the hospitality-everything! It really has a European feel to it. This was my first time here and I’m only sorry that I missed the previous shows. I will definitely be back in two weeks for the Palm Beach Open!”

Taylor Flury, who bested a field of 24 entries to win the Classic Champions $15,000 7-Year-Old Jumper class with AliBoo Farm’s Calano Z, was also delighted with the chance to ride at Deeridge. “This is my second time at Deeridge,” said Flury. “The field was awesome for the young horses. It’s a great opportunity for them to get out of the traditional sand ring and gain a different experience that will really help them in their careers. We love the Classic Champions Tour and we love competing at Deeridge. It’s such a beautiful place!”

“My family and I are so thrilled with the turnout and response we received,” said Katie Robinson, president of the Deeridge Derby and a co-founder of the Palm Beach Masters Series with her brothers Lou and Charlie Jacobs. “We had almost twice as many horses this year as we did a year ago and everyone seemed to enjoy the opportunity to show here. It is rare for hunters to have a chance to hold center stage and we’re so happy with how it all turned out.”

About the Palm Beach Masters Series and Deeridge Farms

The next event in the Palm Beach Master Series will be the new 2018 Palm Beach Open, March 22-25, a USEF rated Jumper 2 show that offers classes at a wide range of course heights from .95 to 1.40 meters as well as Classic Champions Inc. young horse classes. The Palm Beach Open offers just under $100,000 in total prize money.

All events are hosted at the spectacular Deeridge Farms, situated in the heart of North American equestrian sport in Wellington, Florida. Award-winning landscaping surrounds the custom-built show grounds and the facilities that host the Palm Beach Masters Series. There is perhaps no location more intimate or stunning to host the highest levels of equestrian competition.

Further information on the Palm Beach Masters Series is available on line at www.palmbeachmasters.com