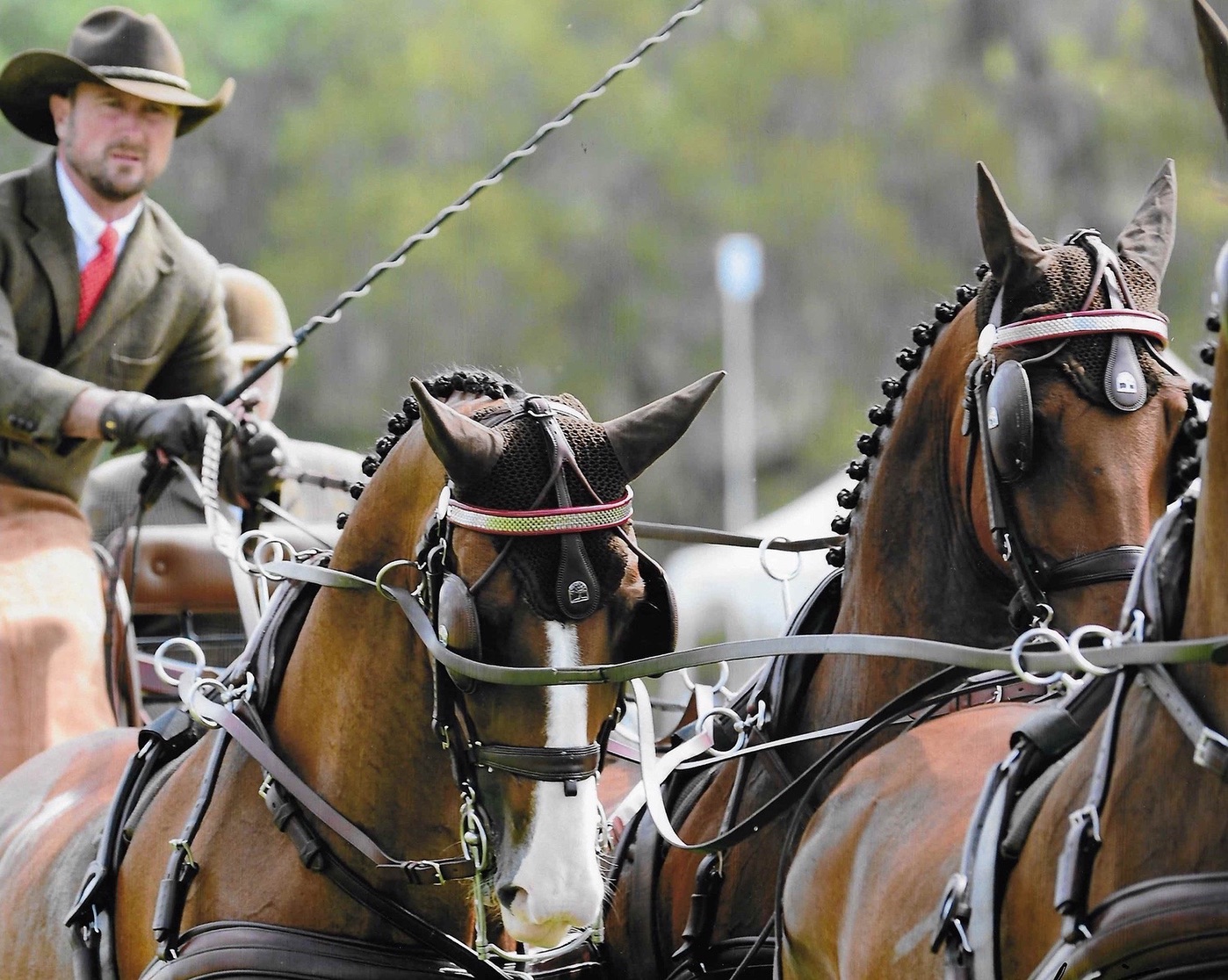 Above: Chester Weber focuses on his team as he prepares for the Live Oak International and a chance to defend his US National Championships Title. (Photo courtesy of Scott Hodlmair).

The Live Oak International at Live Oak Plantation is the only show in the United States to offer both Combined Driving and Show Jumping, and this year’s event will be home to seven US Equestrian National Driving Championships, as well as the final leg before Paris of the 2018 Longines FEI World Cup™ Jumping North American League, the $100,000 CSI-W3* Longines FEI World Cup Qualifier.

Chester Weber has a hefty dual role as the event organizer and a competitor set on breaking his own national championship record at this year’s event. Defending his national title on his home turf might seem like an advantage and but the responsibility of competing and balancing his role as one of Live Oak’s key organizers would be overwhelming for most. Naturally the man who can deftly hold the reins to four horses at one time has systematic plan, “I try to spend the early morning training the horses then shift gears for organizer mode in the afternoon.”

As for his chances at reaching his competitive goals, Weber knows what it takes and that’s what “drives” him. “It feels like I need to work hard all the time. You make your luck, right? The harder we work, the luckier we get.” Weber’s strategy for the upcoming three phases of the four-in-hand championship include veteran KWPN campaigners Splash and First Edition (lead), Boris, and Asjemenou for Dressage and Reno replacing Splash for the Marathon.  This combination of horses is the team that Weber hopes will make him a top contender at FEI World Equestrian Games to be held this September at the Tryon International Equestrian Center in North Carolina.

But first the focus is on this week at Live Oak International. But the deft competitor and cagey host, won’t reveal all his plans, for on course or under the VIP tent, where this year’s Saturday Night Party coincides with another celebratory date: St. Patrick’s Day.

“There may be a few mint-green outfits. Anyone with any great ideas can let me know,” Weber added with a wink, but this is one leprechaun who isn’t giving away his pot o’ gold secrets to his party’s theme quite yet. “What I can say is that a Live Oak Party always promises to be outrageous.” Prior years’ themes have included a suave 007, big top circus, and swash-buckling pirates.

Since its founding, the Live Oak International has grown into one of the most recognized equestrian events in North America and draws some of the best in their disciplines from across this continent and Europe. Two of this year’s new achievements will be the debut of a sand Grand Prix arena, using GGT All-Weather footing, and virtual hosting of The Flanders Foal Auction in the VIP tent on Friday, March 16. This is the first time the Belgian-based sport horse auction and its elite European bloodlines will available to the United States.

Every day at Live Oak International promises a front row to the competition, including the popular Marathon phase on Saturday, March 17th. For more about the event and an opportunity to see Chester Weber and his fellow competitors in action, visit www.liveoakinternational.com.