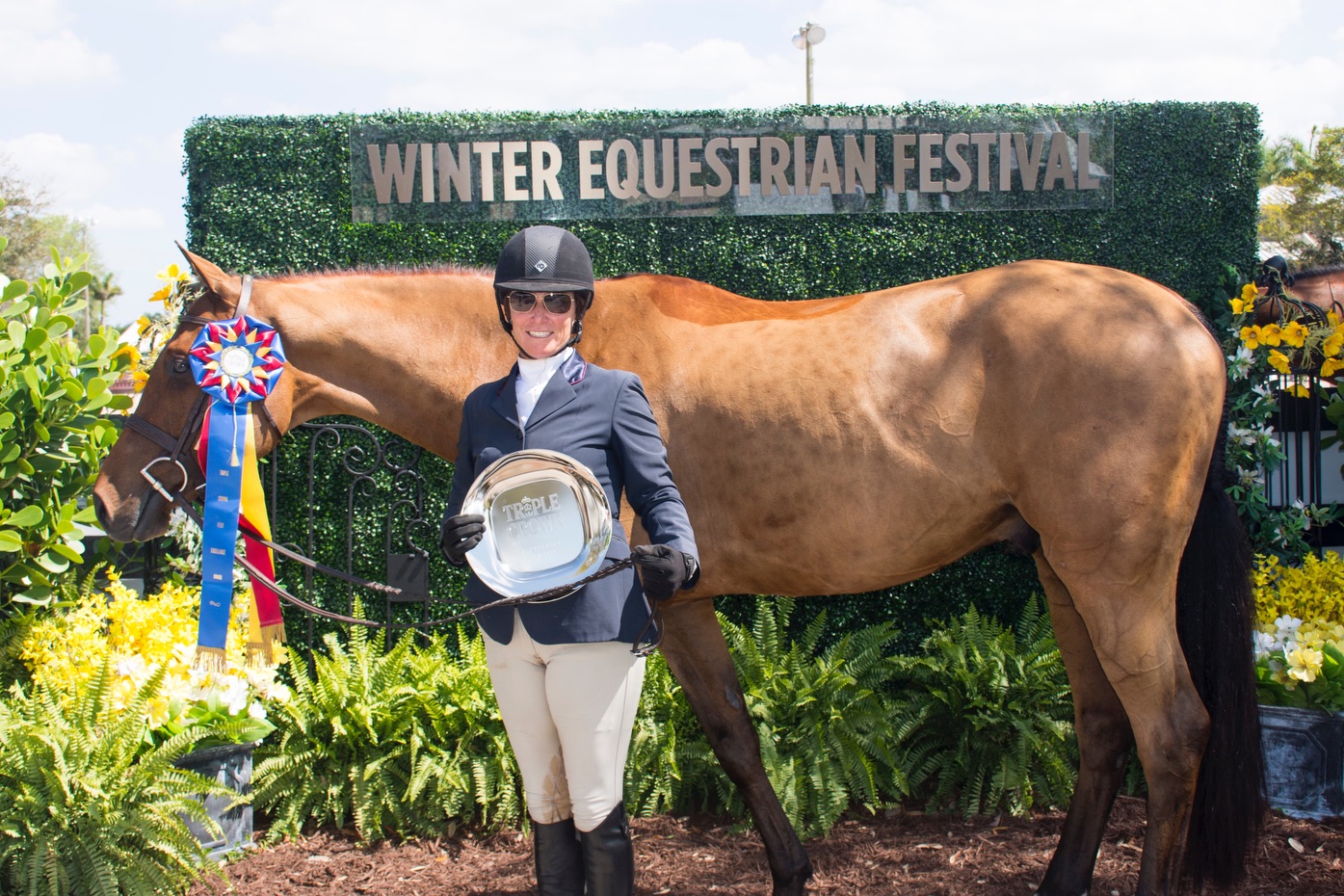 Above: Caroline “Carl” Weeden and Jon Snow winners of the Triple Crown Excellence Award during week nine of the Winter Equestrian Festival. (Photo courtesy of JRPR).

Wellington, Florida (March 14, 2018) – The Triple Crown Excellence Award is given to a rider and horse team that demonstrates exemplary achievement within the equestrian community, as well as showing exceptionally good health and fitness. Danielle Goldstein and Lizziemary received the honor during week eight, with Caroline (Carl) Weeden and Jon Snow taking the prize for week nine. Winners received a tri-colored ribbon, engraved silver tray, and sample products.

Danielle and her twelve-year-old AES chestnut mare Lizziemary (Cabri D’elle x Amanda Lear) recently topped a field of 39 horse-and-rider combinations to win the $384,000 CSI5* Grand Prix. Competing against the likes of McLain Ward, Eric Lamaze and Beezie Madden and other top riders could have been a daunting task, but not only were Danielle and her mare one of only two teams to post a double clear, but they completed the jump-off with a blistering 35.922 second run – nearly 10 seconds faster than her nearest competitor.

Originally from New York, Danielle now lives in Holland and represents Israel in international competitions. “I moved there in 2010 for a short period and while I was there I got the citizenship,” she stated.  “It means a lot to me. I think it’s important to try and do something good for a country that does not get so much positive attention, and I feel a deep connection to the place.”

While winning the Grand Prix checked off one of Danielle’s goals, she is looking forward to the Global Championships Tour and then the World Equestrian Games. She’s very familiar with Triple Crown products and is excited to use her gift.  To see more follow this link https://www.youtube.com/watch?v=H1mvfRvxn8A

Carl Weeden and Jon Snow, a six-year-old bay Holsteiner gelding (Lenett x Orchidee XIII) is consistently moving up the Green Hunter Division ladder.  “He has been great,” said Carl. “He just moved up to the 3’3” Division. This is his second week and he is really coming into his own.”

Jon Snow is ridden by Piper Benjamin and owned by her mother Margaret, who has trained with Carl for years. Benjamin praises the Weeden’s commitment to the sport. “Carl is interested in the sport as a whole. She looks at it strategically, so not only is she concerned with everyone’s riding at the moment, but she’s also looking down the road to see where the sport is going,” said Benjamin.

Goals for Jon Snow include the Green Hunter Incentive Program Regionals at Brandywine in Devon, Pennsylvania and the Championship in Lexington, Kentucky. Carl, too, has definitely heard about Triple Crown products. “Oh, yes,” she said. “I’m looking forward to picking out my bag of feed.”  To see more follow this link https://www.youtube.com/watch?v=IsowlEEnS6k

When it comes to fulfilling Olympic-caliber horses’ nutritional needs during intense competition, Triple Crown Nutrition knows there is no substitute for supreme quality feeds. The renowned feed company was the first to add prebiotics, probiotics, and organic minerals to horse feed, and continues to deliver the very best in equine nutrition. A proud sponsor of the 2018 Winter Equestrian Festival and the Adequan® Global Dressage Festival, Triple Crown Nutrition continues to recognize riders at this prestigious international show series.