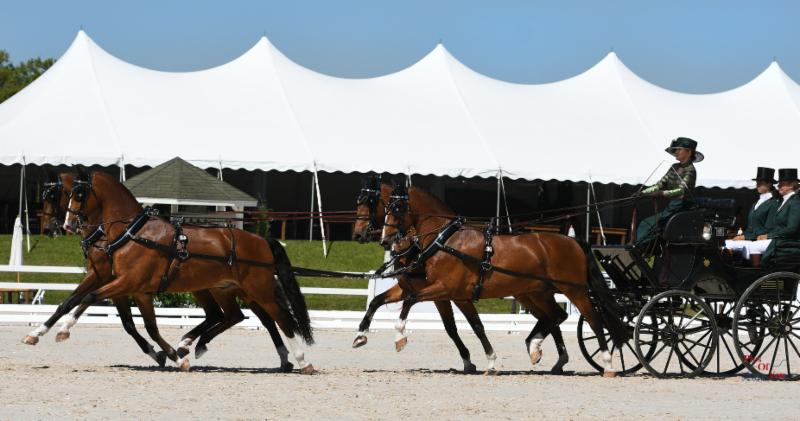 Weber, Ocala, FL, is keen to take home a record 15th USEF Four-in-Hand National Championship title, and he showed his determination in the dressage arena, earning a score of 40.11 to top the division.

“It’s always a challenge at home,” Weber commented on the challenges of competing at his home venue. “They leave their home barn, and they come up here and it’s just a very different atmosphere. Typically they go to an event elsewhere and everything is new and they get used to everything, but here it’s ‘oh that changed!’ So that’s a little bit of a challenge for them, but I was pleased with them. I’m always proud of my horses and what they do.”

Misdee Wrigley-Miller, Paris, KY, is hot on his heels in second place after earning a 46.84 in the first phase.

“I took a bit of a gamble today and used a new leader because I wanted to see how he would react to the atmosphere, and I was really pleased with him-until the end of the test,” Wrigley-Miller explained. “In our last extension toward the television screen my one leader saw himself on television and said, ‘Ah! I’m a star!’ So that unsettled the team a little bit, but we know we’re going to get the best America has to offer here. It’s always great to be at Live Oak.”

Lisa Stroud, Kennett Square, PA, rounds out the top three of this competitive Four-in-Hand championship with her team earning a score of 53.15. Like many competitors this weekend, Stroud’s goal is to prepare for the upcoming FEI World Equestrian Games in the fall.

“I think that this venue is really the best in the United States, and the closest to a European competition with its atmosphere and tents and attention to detail. The horses get a feeling of what it’s like to be in a larger playing field because we are a smaller sport in this country, so it’s really good for the horses to come here.”

This is the first year that U.S. Equestrian has offered Intermediate Combined Driving National Championships, and the competition is fierce as drivers stake their claim at the inaugural titles. Adcox, Sarasota, FL, led the way, taking command of the USEF Intermediate Horse Pair Championship Thursday morning. He and his duo earned a dressage score of 60.88. Shane Doyle, Hillsborough, NJ, follows in second place with 66.64 points.

“Dressage is not my strong point,” Adcox shared with a laugh. “I borrowed the pinto (Harley) from Tom Warner a week ago. Obviously, you always want things better. There are some things I

wanted to do a little better that are more my horses weak points. In a week you don’t really have time to change that, but you can certainly try. He’s such a steady eddie, so you can count on him to do his job, where the 6-year-old you just kind of have to manage and hope he doesn’t do anything wrong.”

Combined driving continues Friday as the three remaining USEF Combined Driving National Championships hold their dressage tests beginning at 8:00 a.m. Drivers will then take part in the exciting marathon on Saturday before concluding the competition on Sunday with Obstacles.

The show jumping competition at Live Oak International begins Friday with the $10,000 Waldron Private Wealth 1.40m Power and Speed Stake at 1:00 p.m. and the $35,000 CSI3* Longines World Ranking Class Qualifier at 3:00 p.m., which is an opportunity for riders to earn valuable points in the FEI World Rider Rankings.

Live Oak International is the only show in the United States that offers both combined driving and show jumping, attracting some of the country’s most talented riders and drivers. General admission tickets are available online and at the gate for $10. Children under 12 receive free admission. Parking for the competition is also free. For those who cannot attend this year’s event, all competition can be seen live at www.liveoakinternational.com/watch-live/.

Spectators can guarantee a front row seat to the Marathon phase of the combined driving event by purchasing a tailgating spot at one of the many exciting hazards. Tailgating passes are still available and can be purchased at www.liveoakinternational.com.

Live Oak International will also virtually host The Flanders Foal Auction. The bidding will start on Friday, March 16, in the VIP tent. This is the first time the Belgian-founded sporthorse auction will take place in the United States and will auction 20 embryos out of top European bloodlines.