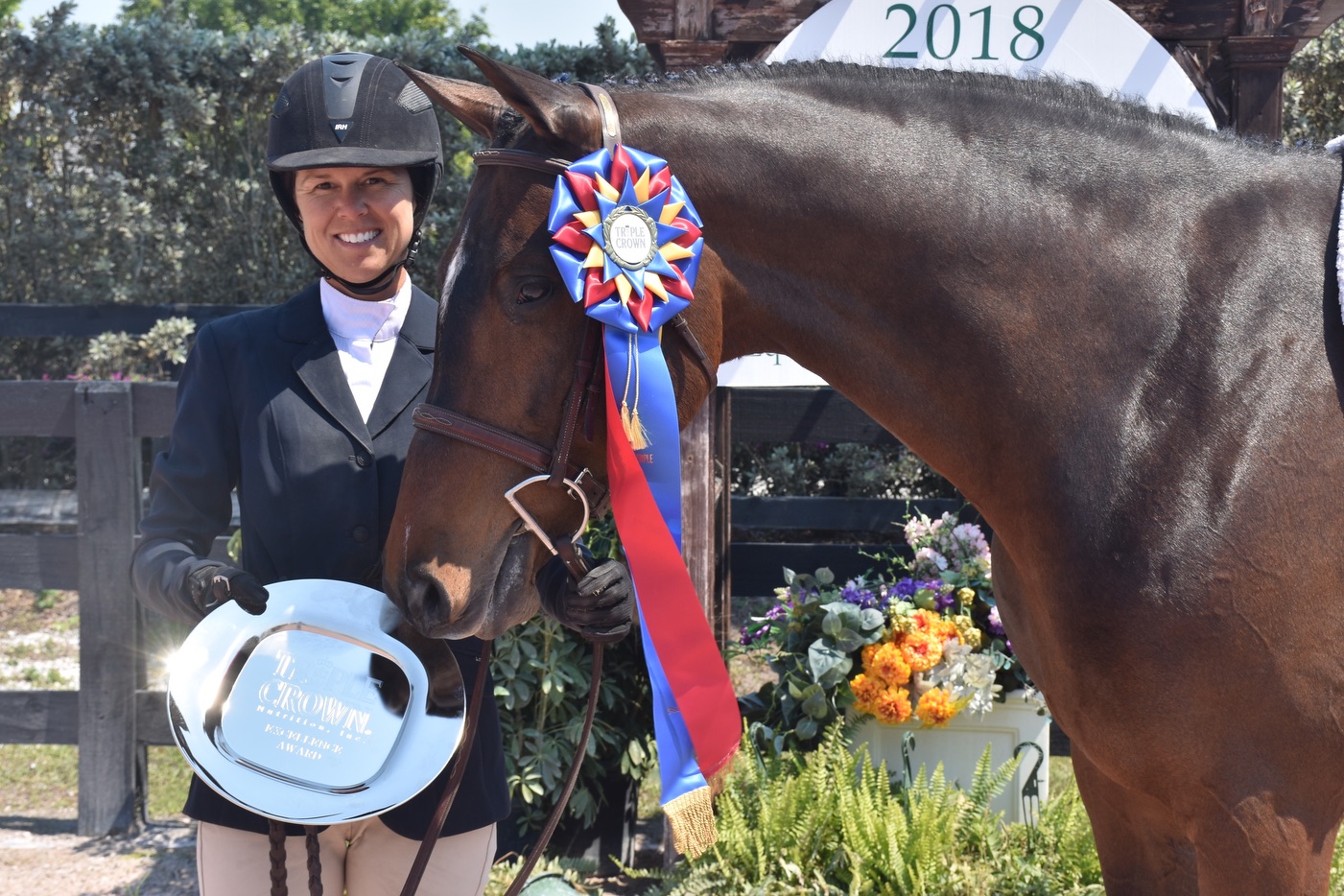 Above: Liza Boyd and Zwoosh Winners of the Triple Crown Excellence Award during week ten of the Winter Equestrian Festival (Photo courtesy of JRPR).

Wellington, Florida (March 26, 2018) — The Winter Equestrian Festival is winding down here with only one week to go, but Triple Crown Nutrition is as eager as ever to show their support for competitors with the prestigious Triple Crown Excellence Award. Triple Crown has presented this award throughout the season at the Winter Equestrian Festival to exceptional horse and rider combinations. During weeks ten and eleven, the winners were Liza Boyd riding Zwoosh and Brady Mitchell riding Seaside, respectively.

The week ten winner, Liza Boyd, of Camden, South Carolina, won the award after she and gelding Zwoosh won the USHJA 2’9” Under Saddle Class. Zwoosh is owned by Rachel Demuro and in training with Jack Towell. “He’s a lovely horse. He goes more like a Thoroughbred—obviously a really good mover and a good jumper. He was excellent today!” says Boyd of the gelding. Boyd and Zwoosh also showed in several of the USHJA 2’9” Over Fences Classes and were first in two of them. Boyd is hoping to step up to the next level with Zwoosh in the final weeks of the Winter Equestrian Festival and possibly start doing the Handy Hunter with him. To see more follow this link https://www.youtube.com/watch?v=phDZV5bRe84

Week eleven’s winner was Brady Mitchell aboard Seaside. Mitchell, originally from Toronto, Ontario, now resides in Wellington and spends summers in New York. His mount, Seaside, is owned by Eliza Kimball of New York City, and in training with Emily Smith. Mitchell and Seaside showed in the Performance Working Hunter 3’6” classes, winning the Over Fences classes and taking second place in the Under Saddle. “He’s been great the whole season,” Mitchell commented of the gelding. “He feels really in the groove right now so I can just get in a light seat and go at a nice forward pace and he feels like he’s got it.” Mitchell says that the major goal for Seaside now is to rack up as many points as possible in the Junior Hunters.  To see more follow this link https://www.youtube.com/watch?v=hoH2kxwXK9w

With just one week to go at the Winter Equestrian Festival, Triple Crown Nutrition is proud to add these talented competitors to the list of Triple Crown Excellence Award winners this season. Each of the winners received a tri-colored ribbon and engraved plate, as well as a bag of Triple Crown feed to try.

Triple Crown Nutrition prides itself on offering feeds and forages tailored to suit the individual needs of every equine athlete. Using revolutionary formulations and premium ingredients, Triple Crown was the first company to add prebiotics, probiotics, and organic minerals to horse feed. Based in Wayzata, Minnesota, Triple Crown is the official feed sponsor of the US Dressage Team, Land Rover US Eventing Team, and Hermes US Show Jumping Team.