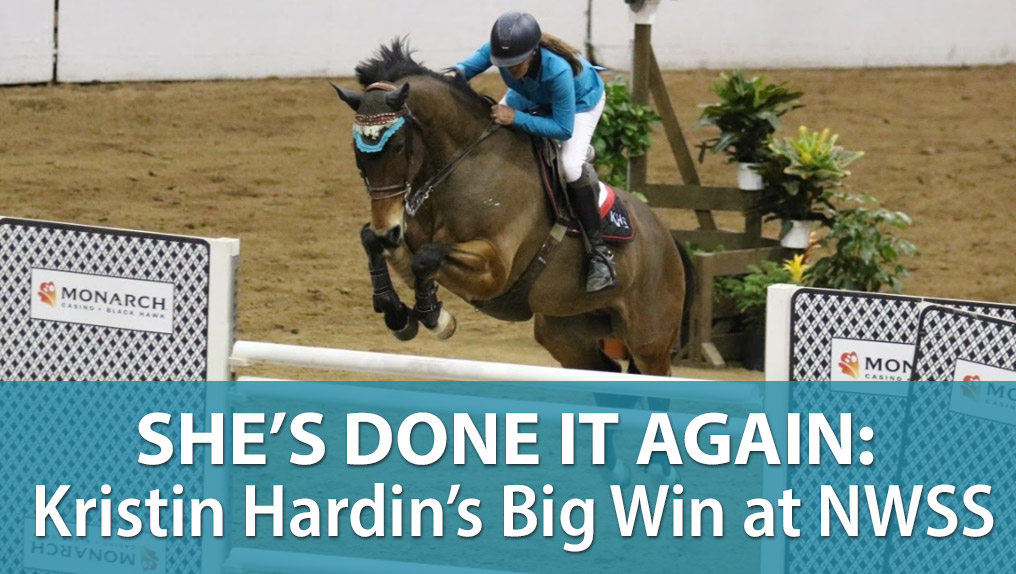 “She’s done it again!” The quote of the week at the National Western Stock Show as Kristin Hardin takes the third consecutive win in the $10,000 Monarch Gamblers Choice aboard Bert.

The Gamblers Choice, a high stakes jump class riding at 1.30 to 1.45, is designed to make the riders think on their feet and show off their best ideas. There is no set course, just an arena full of a variety of fences ranging from easiest to hardest, all with their own set points from 10 to 150. The riders can jump the fences in whatever way that makes sense to them, but may only repeat each jump twice. The goal is to be the most efficient, and get as many points as possible.

24 starts gave it their all for those 60 seconds to rack up as many points as possible, all to face the Joker Jump. The Joker Jump is the tallest jump on course and riders can choose to either take the risk for an extra 200 points or nod their head and take a leave. But unlike the other jumps where rails down don’t give penalties, if the Joker Jump comes down then 200 points are subtracted from their score.

Hardin had two horses entered this wild Friday night, and with these two horses she would be the only rider to ride to a pre-Joker Jump score of 1,000+. Riding a snappy mare, Aran, earlier in the night she ranked up the best raw score before the Joker Jump. With a total of 1,040 points, she faced the airy, skinny that unfortunately came down on with Aran. Luckily enough, the night was not over yet. Kristin still had her ride on Bert, the horse she had previously won the Gamblers Choice on.

Charlie Carrel was the first rider of the night, and with only one trip left he still held the lead. But when Kristin laid down her quick, clean, and efficient round with Bert that was no longer the case. Kristin used her similar game plan from earlier that night, and with Bert she got a raw score of 1,000 before challenging the Joker Jump. All she had to do now was clear the Joker Jump, and the win was her’s.

Bert and Hardin wanted that win. It was obvious as they rode up to clear the final jump of the night, and just like that — she had done it again. Kristin Hardin and Bert took the win with 1,200 points in the 2018 $10,000 Monarch Gamblers Choice.

The night ended with victory gallops, photos, ribbons, cheers, and fans galore. Not only does Kristin have a huge fan club herself, but so does Bert. He even has his own book! Kristin and Bert finished the night meeting fans, taking pictures, and signing autographs all while the words “She’s done it again,” could be heard across the entire show grounds.