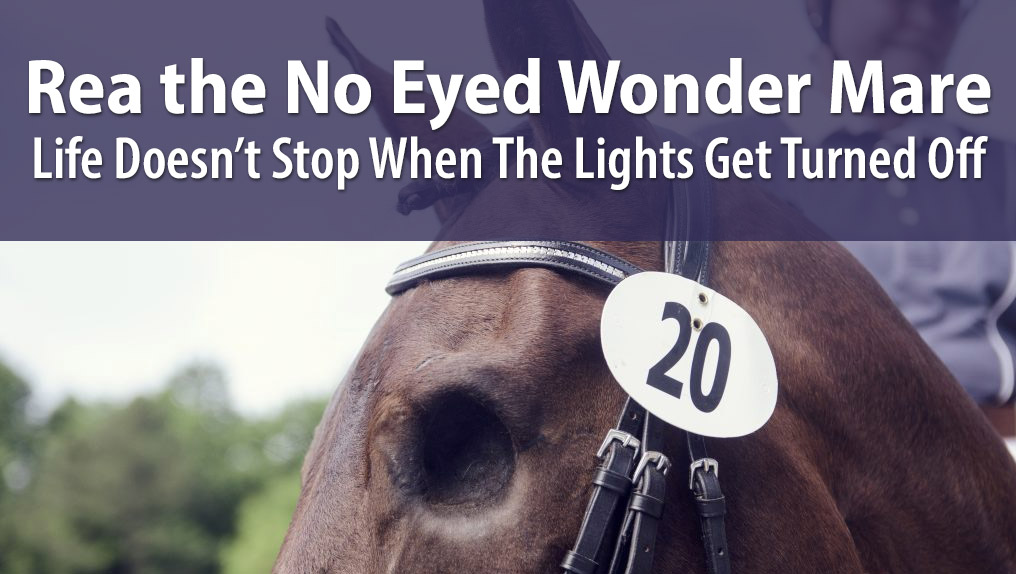 Like many amateur owners, I am great at imagining disaster scenarios for my horse. A career ending torn suspensory. A tragic pasture accident. Let’s not even talk about the ‘C’ word… but in all of my anxiety-ridden disasters, I never thought about losing eyes to fungal infections. But for North Carolina amateur, Nikki Schweizer, that’s exactly what happened to her Trakehener mare, Rea.

Nikki, a large animal vet, bought Rea in late 2014 with the goal of competing in lower level eventing and dressage. They attended a few combined training events where they did well, and schooled up to 2’9”. Nikki and Rea were off to a great start in their partnership when Rea’s first eye started having problems.

Rea had a small corneal ulcer on her eye that got secondarily infected with fungus. While at first it healed well, the eye started to swell the day before the pair was due to leave for an adult riding camp at Fellowship Farm. “I was treating her multiple times a day, but it was clear the eye was not getting better,” Nikki said. Rea went straight to the North Carolina State University Vet School, and was treated around the clock for a few days. They determined a corneal graft would be the best option for the eye to heal, but the graft failed within 48 hours.

Desperate to do the best for her horse, Nikki decided to do a second graft on the eye. At first it held, but after Rea was discharged and cared for at home for a month, the eye went south again. Nikki, on vacation with her husband in Germany, got the call. “She had surgery while I was in a different country, but she adapted very well and did great as a one-eyed horse!” Nikki said.

Even sans one eye, Rea and Nikki picked right back up where they left off in their dressage training. In the summer of 2016, they attended their first recognized show in Training and First Level. They won the Training level challenge, and after that Nikki was hooked. “I was determined to get my bronze medal on this horse,” she said. They earned First and Second level scores, and worked with her trainer to make a musical freestyle. “My husband and I spliced the music for it, and I took it to NCDTA championships where Rea and I got 3rd place in a division with both pros and amateurs,” Nikki said. Even with one eye, the pair glowed with prospect… but could they withstand another huge setback?

In January of this year, Nikki got the text that embodied her worst nightmare – Rea’s remaining eye was swollen. They immediately treated the eye with antifungals, and though it initially improved… after a few days the eye was worse. Armed with her knowledge of veterinary medicine, Nikki was alarmed. “I knew how bad it could get,” she said. “It was very frustrating that I couldn’t fix my own horse.”

Not willing to put Rea through more surgeries with general anesthesia, Nikki decided the eye would get better with hourly treatments at the farm, or not get better at all. “I took her to the Animal Eye Clinic in Waxhaw, NC where they did a keratectomy, which removes some of the infected cornea that wasn’t healing. At that time, the ophthalmologist was very confident the eye didn’t look like fungus and Rea would do great,” Nikki said.

Unfortunately, four days later tests results showed there was fungus in the eye, and the only option was to up the medication frequency. The barn family at Nikki’s farm teamed together to try and save Rea’s eye. “At this point everyone at the barn was versed in how to give her meds. Rea was getting around the clock care, because of her team of helpers,” Nikki said. Even with the group effort, it was soon clear that the fungus was gaining the upper hand.

As a last ditch chance to save her eye, Nikki opted for a standing conjuctival graft. It held for two days, but eventually failed. Even after antifungal meds were increased to every half hour, Rea’s eye ruptured after a little less than month of battling the issue. “I was done. Just done. Tired, emotionally spent,” Nikki said. That same afternoon, Nikki had the eye enucleated.

This is the part of the story where I tell you how I, having followed the events on Facebook, felt so disappointed for Nikki. That’s a hard break, I thought. Such a nice mare. Shame she’ll have to retire her.

This is also the part where I get to tell you how delightfully wrong I was!

Initially, Nikki planned to bring Rea home to retire as a pasture ornament. “I was worried she would be super panicked,” Nikki said. “I didn’t want her to have a bad quality of life.” But after seeing how well Rea adjusted to life as a blind horse, she began to have other ideas. “My thought was to give her a chance,” she said.

Maybe because her eye no longer hurts, or maybe because horses are resilient creatures that can handle so much more than we believe, but Rea took to life as a blind horse better than anyone could have hoped. Nikki changed her turnout from a large field to a smaller, boarded pasture with a companion pony, but otherwise Rea’s daily care has not changed. “She is already dragging the barn help out to the pasture, because she is ready to go out and already knows where she’s going!”

Rea’s enthusiasm for life wasn’t just for turnout. Taking it slow, Nikki first took Rea out to the round pen to explore. Then lunged. Then saddled her up and went for her first blind ride, and like the amazing mare that she is – Rea trotted around happily. “I have to steer ALL THE TIME,” Nikki said. “If I forget and go into autopilot, we run into things… but that is seriously the hardest thing.” The rest of their riding has been remarkably the same.

“She doesn’t care about other horses, and she doesn’t care about footing. We trailered off the property for a lesson, and she didn’t put a foot out of line,” Nikki said. The biggest difference, besides steering, is Rea prefers constant contact now. “She needs to know where I am. No more tootling around on a loose rein at the trot.”

Eyes or not, Rea and Nikki are continuing forward in pursuit of their goals – their Bronze Medal. “She doesn’t know that the lights didn’t just get turned off on everyone the same day hers did,” Nikki said. This incredible pair shows that blind horses don’t have to be a pasture ornament.

I’ll be following along with their progress at Rea the No Eyed Wonder Mare’s Facebook page, cheering them on in pursuit of success in the show ring and an amazing partnership we all can aspire to.

Half-Leasing Doesn’t Make You Any Less of an Equestrian