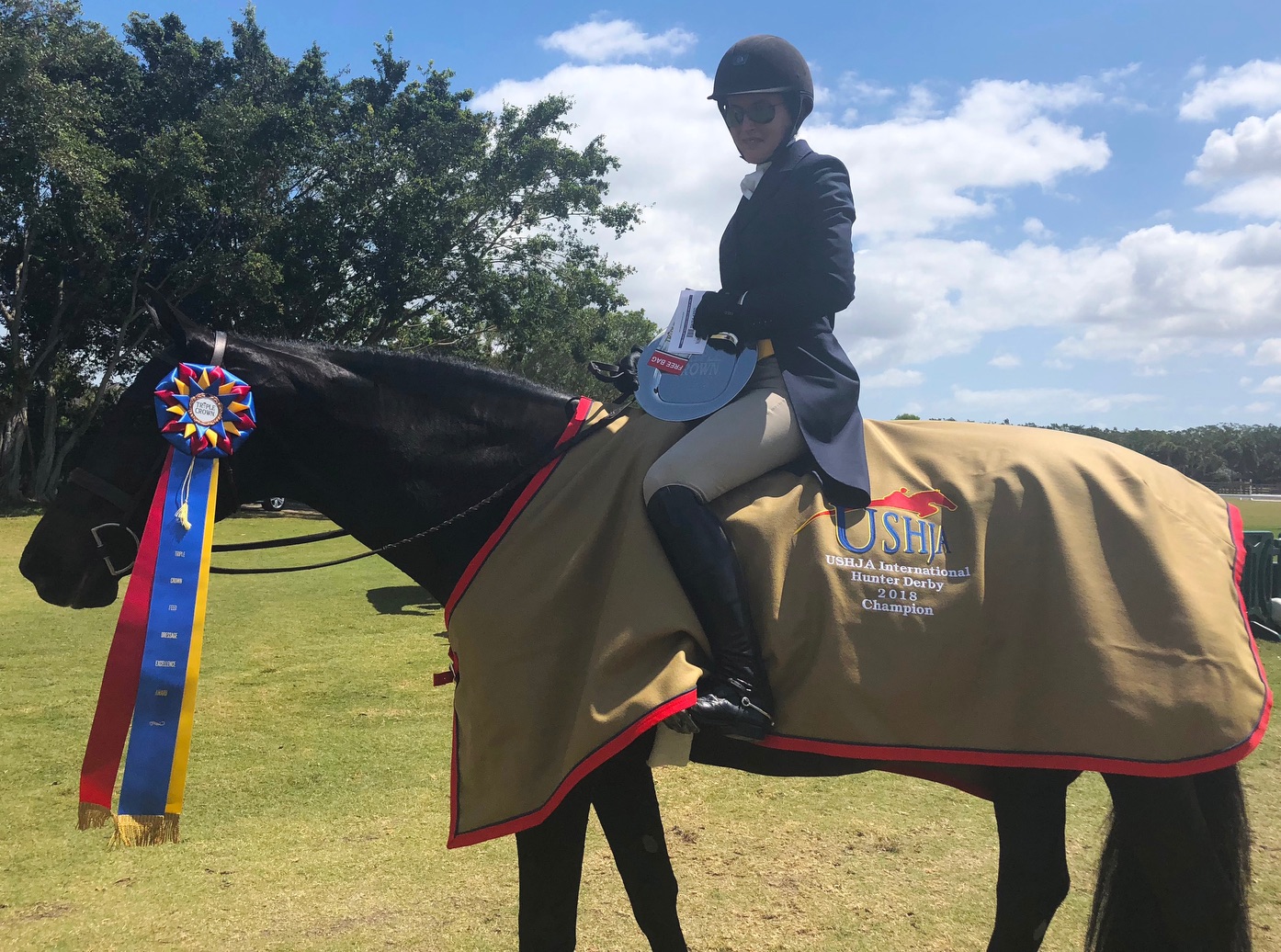 Above: Jennifer Hannan and Mindful winners of the Triple Crown Excellence Award during the final week of the Winter Equestrian Festival. (Photo courtesy of JRPR)

Wellington, Florida (April 5, 2018) – The old saying “it’s not over ‘til it’s over” proved true for Jennifer Hannan and Mindful as they won the $15,000 USHJA International Hunter Derby Hunt & Go during the final week of the Winter Equestrian Festival at the Palm Beach Equestrian Center in Wellington, Florida. Hannan and Mindful, a 14-year-old Hanoverian owned by Kensel, LLC, also placed second in the $50,000 USHJA International Hunter Derby held later that weekend.

The “Hunt and Go” format is new at the Winter Equestrian Festival. All horses and riders complete a course of eight fences in the initial “classic” round and then immediately continue on to tackle the six remaining jumps in the “handy” section. The 14-fence course, designed by Kenny Krome, also includes options where riders can pick up extra points.

“I like this structure for two reasons,” said Hannan. “First, if you have an older horse, you can just do one round and be done, which is great for their stamina and age. Second, if you have a younger horse, you can get in the ring and get a feel for things before you speed it up and get going – it’s not the same monotonous thing all the time.

Hannan and Mindful captured the blue by besting 38 other riders, ending with a final score of 355 for the win.  Hannan gives a lot of credit to Mindful.  “My horse did his job very well. I like showing on the grass field because I can gallop a lot more, and there are more places to show off. The judges really want to see you move along, so you need a brave horse that you can comfortably do that on.” To see more follow this link https://www.youtube.com/watch?v=wllXDYVa-Sw

The team is based at Ocean Echo Farm in Wakefield, Rhode Island. Hannan is looking forward to the Derby Final, going to Devon, showing a bit this summer and then on to the indoors show season.  Mindful’s show resume includes such achievements as being named The 2014 Chronicle of the Horse’s Show Hunter of the Year and the USHJA World Championship Hunter Rider Hunter of the Year.

When it comes to fulfilling Olympic-caliber horses’ nutritional needs during intense competition, Triple Crown Nutrition knows there is no substitute for supreme nutritional and high quality feeds. The renowned feed company was the first to add prebiotics, probiotics, and organic minerals to horse feed, and continues to deliver the very best in equine nutrition.

As a sponsor of the Winter Equestrian Festival’s hugely popular “Lunch and Learn” series, Triple Crown continued its commitment to supporting the dietary needs of the horse. With a short introduction by Rob Daugherty, owner & founder of Triple Crown Nutrition, Kenneth Kopp, DVM presented “Gut Instincts – Feeding for Health and Performance.” Attendees of the program were updated on new research and nutritional approaches to improve health and performance.

Dr. Kenneth Kopp was a former owner of the Missouri Equine Hospital in St. Charles Missouri and was the attending veterinarian for the Anheuser Busch Clydesdale Breeding Farm.  For the past 25 years, his career has focused on the animal health industry, consulting with feed manufactures, ingredient suppliers, medical device manufacturers, and veterinarians domestically and internationally. He has presented hundreds of educational seminars and coordinated research on a variety of equine topics including equine gut health. Throughout his career he has served on several industry and university animal advisory boards.