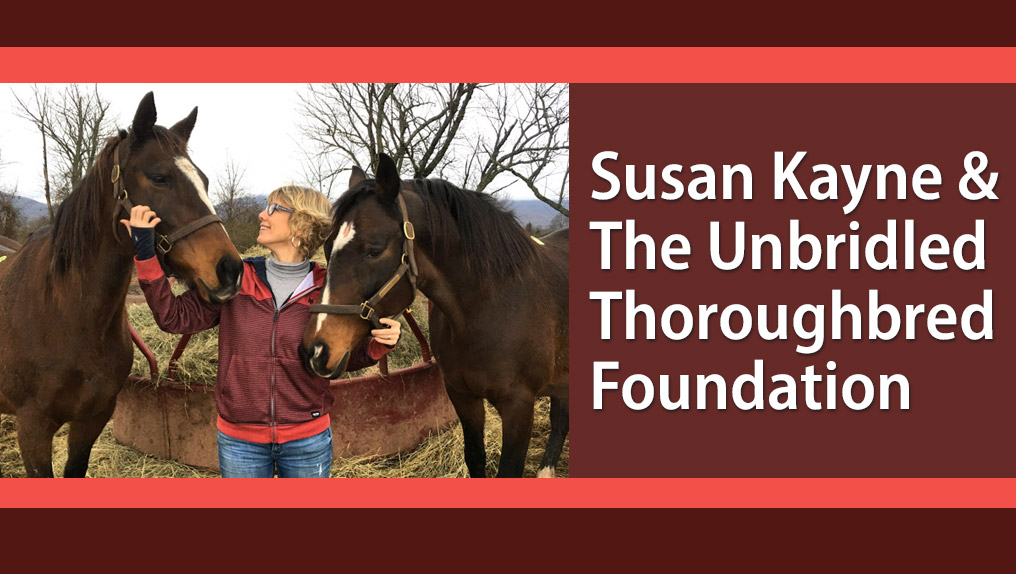 This past summer, I had the pleasure of meeting Susan Kayne at HITS on the Hudson in Saugerties, New York. Susan is a remarkable horsewoman who has dedicated her life to advocating for the fair treatment of racehorses, both on and off the track, through her Unbridled Thoroughbred Foundation. I had the opportunity to interview Susan about the incredible impact she has made on the equestrian industry.

Susan first became interested in Thoroughbreds when she was four years old, watching CANONERO II win the 1971 Kentucky Derby. Shortly after, she began riding Thoroughbreds through her junior years in the Hunter and Jumper divisions. “At that time, which was prior to the warmblood invasion, Thoroughbreds were the ‘horse of choice’ in the show ring,” Susan recalls.

In 1977, Susan’s mother became active in the New York Thoroughbred Breeding and Development program, which made Susan interested in horse racing. As a teenager, Susan had the opportunity to gallop race horses at Saratoga, and describes, “the euphoria of sitting atop a horse traveling at 35-mph [as being] ineffable.” She continues, “It ups my bravery’ for the Speed Classes!”

However, in 2011, Susan’s view of the racing world changed forever. In November, Susan’s horse, Bourbon Bandit, fractured his knee while racing at Aqueduct Racetrack. Susan began investigating the circumstances surrounding his breakdown, and discovered the other side of horse racing; drug abuse and slaughter. “And that is when my resolve strengthened, and I became determined to be an unwavering voice for Thoroughbreds; to live the change they needed to see. And so began my real Advocacy.” Susan states.

In 2004, Susan founded the Unbridled Thoroughbred Foundation when a track trainer she previously worked with called and said he would soon be retiring Stalwart Member, an 11-year-old NY-Bred whose winnings totaled over $700,000. “I was told to get a stall ready — something I had easy access to in years past.  But… I had just sold my farm. My own horses were boarded, and for the first time — I didn’t have the luxury of an extra ‘free stall’. When I explained [to his owner, Sandy Goldfarb,] that I could not take Stalwart Member unless he could send him with a check for at least 6-months board — the minimum time requirement to let down a horse who had been at the track since the age of 2, he replied with the Fed Ex tracking number!” Susan then decided to form the Unbridled Thoroughbred Foundation, allowing her to combine her love of Thoroughbreds with an official organization dedicated to addressing ‘aftercare’ issues while putting the horse first.

“Sandy Goldfarb and Stalwart Member brought recognition and credibility to the launch of Unbridled Thoroughbred Foundation. What I had been quietly doing for years now had a name,” Susan observes. As the Press picked up on the story of Stalwart Member, it gave Susan opportunities to talk about the importance of knowledgeably transitioning Thoroughbreds from the track to appropriate second careers, semi-retirement, and/or sanctuary homes. “For a smooth transition from the track, it is imperative that the new handler is aware of the structured routine to which the horse is accustomed, and the training signals known and understood by the horse. For example, pulling on the reins of racehorse means GO! not WHOA!  Not being savvy to these nuances, often results in misunderstandings and frustrations that can thwart what has the potential to develop into a rewarding lifetime partnership.”

Susan also notes the importance of letting a horse unwind from a career on the racetrack. “Rushing is the biggest enemy to a successful transition. This is the time to build a relationship, and utilize groundwork to clear out any negativity from past training and associations, and most importantly establish trust. Short-cutting any re-education during this precious time will bury issues that in the long term will show up and result in failed adoptions.”

Through her Unbridled Thoroughbred Rescue, Susan has directly placed several dozen Thoroughbreds, and networked for many hundreds more over the past decade. Although every horse Susan has helped rescue has had a profound impact on her, she does have a soft spot for older Thoroughbred broodmares. “To see twenty-something year-old-mares thrown away in slaughter pens, searching for anyone familiar after years of service, sickens me to the core. These senior mares have done all that has been asked of them. Many have carried and birthed a dozen or more foals. Yet when they are no longer able to produce they are priced by the pound and relegated for meat.”

For those looking to become involved in advocating for retired or injured racehorses, Susan says, “The best thing the equestrian community can do is to become aware of the reality of horse slaughter, and educated as to the cruel violation and betrayal it is to our horses. The equestrian community is in a position to be powerful and outspoken advocates who stand against horse slaughter — no matter the Breed.” To learn more about Susan Kayne and her work with Thoroughbreds, you can visit her website, http://www.susankayne.com.

Just Call Me Jumper Girl: Being Brave Enough to Try a...