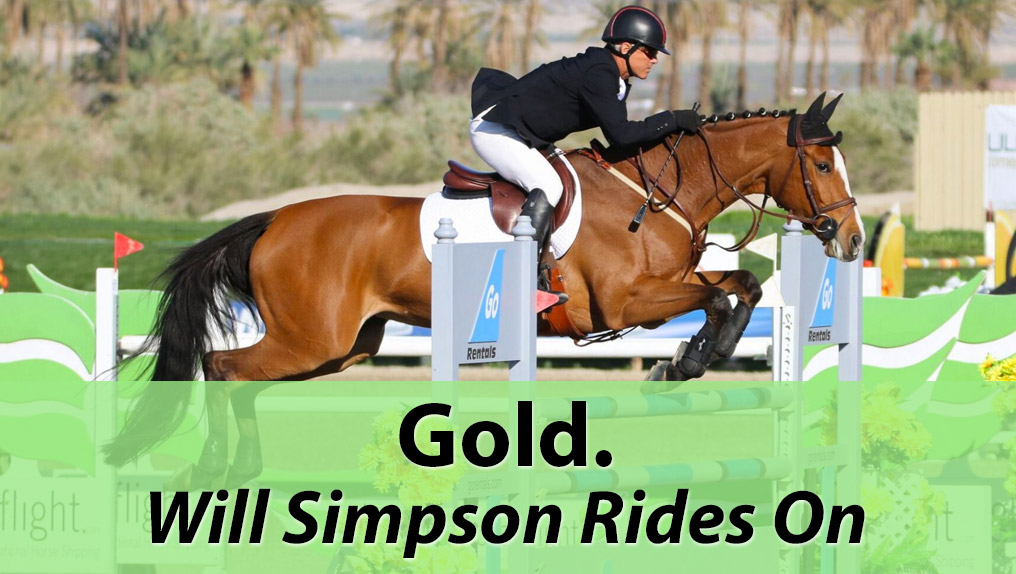 “So, I finish my warm-up and all of a sudden, George and McLain coming running up and say, ‘All you gotta do is jump clean and we got the gold!’” Just another jump off for 49 year old Grand Prix veteran, Will Simpson? Not so much. This is 2008, this is Hong Kong, and, yes, this is the Olympic Games. If Simpson and his mount, Carlsson vom Dach, execute a fault free round in the jump off versus Canada, they seal the deal for the U.S.A. Gold. Thirty eight years after Simpson’s riding journey began on a farm in Illinois, he was about to ride into the ring for the moment of dreams. “The first thing that came over me was ‘Wait a minute, these fences are like houses.’ But, my second thought was ‘I got this. Jump offs are my favorite part of the sport.’” And so began a ride into destiny.

By the time 2008 rolled around, Will Simpson had been making news as a rider for 31 years. As a junior rider in Illinois, Will and The Roofer jumped 7’5” in front of 40,000 people at Arlington Park Race Track and, as fast as you can say “big wall,” a career was born. Eight years later in Cincinnati, Will and Jolly Good set a world high jump record at 7’9” that stood for nine years. But, as Midwest gave way to West and the lights dimmed on the 20th century, Will Simpson became famous not just as a Puissance specialist, but as the guy between Spruce and San Diego that you just didn’t want walking in the ring after you in the jump off. He was fast, he was accurate, and he was fearless.

With top mounts such as Ado Annie and Tosca, Simpson racked up over 75 Grand Prix wins and three World Cup appearances. But, until Carlsson vom Dach came into his life in the spring of 2007, there was very little time spent on the international stage. For the self-described “national rider,” the concept of the Olympic team was as foreign as Hong Kong itself. But, as spring rolled into summer and into autumn, Carlsson began to show himself to be less of the 1.50 meter horse Will thought he had bought, and more of a 1.60 meter horse- the kind of horse that makes a veteran rider whistle the National Anthem when he gets up in the morning. After wins at Spruce Meadows, Del Mar, and Los Angeles, Simpson heeded the advice of Chef d’Equipe George Morris and headed south to Argentina for some international experience. Clean rounds and consistent performances in South America led Will and Carlsson’s principal owner, Eva Gonda of El Campeon Farms, to put their heads together and come up with a plan for the Olympic Trials in 2008. With a 2007 travel schedule like George Clooney in Up, the duo went from Europe to Cali, then to Canada, back to Europe, back to Cali, down to Argentina and back to Cali. Simpson and Gonda decided that it was time for a break and to train the horse at the farm with no horse shows before shipping to Wellington, FL in February for the Olympic Trials.

After a few downed rails in the first trial, Carlsson and Will caught fire. “We started jumping clear rounds and won three in a row. He was great there,” Simpson remembers. In spite of missing the last trial in Florida due to getting cast in his stall the night before, Carlsson made the top ten and he and Will were off to Europe. Gold Medal Olympic veterans Beezie Madden on Authentic and McLain Ward on Sapphire seemed a lock to make the team again, and Laura Kraut and her young ping pong ball of a mount, Cedric, were right there with them. Will and Carlsson were fighting it out for the last seat on the bus with Jeffrey Welles on Armani, Olympian Anne Kursinski  on Champ 163, young upstart Charlie Jayne on Urbanus, and wife, Nicole Shahinian Simpson on SRF Dragonfly. “We went to Europe and did the first three shows, La Baule, Rome, and St. Gallen, and we were clean in the first rounds at all three, double clean at Rome, and then they wanted to see us at Aachen.” After Armani injured a tendon, it came down to Will Simpson and Anne Kursinski- and Simpson got the nod. As a primarily national rider, Simpson had never before been on a team, much less an Olympic team. The moment was not lost on him. “For my story, it was, ‘Wow, make the top ten, what an accomplishment.’ Then, it was, ‘Make the Team. What an incredible feat. Represent the country…’” Simpson’s voice trails off remembering the enormity of the experience. And so it was, off to Hong Kong.

“The horses jumped great all week, all of them, and we started to think that maybe we’ve got a chance here. We could win this thing,” he recalls. After the final jumping round, the oddest of things happened: there was a tie. Laura Kraut was, by her own admission, in the rider’s tent chomping on a hot dog when she and her sister, Mary Elizabeth, realized that there would be a jump off against Canada for the Gold Medal. Full stomach aside, Kraut and Cedric gave a fault free round, as did Ward and the great mare, Sapphire. The Canadians had a four fault score, meaning that if Will and Carlsson slithered around just right, the band wasn’t going to be playing Oh, Canada. So, this is the backdrop for Morris and Ward running up to them in the warm-up arena. As Simpson puts it, “After 35 years of doing circles in the sand, this was it.” And, like he says, jump offs are his thing. The jumps were still as big as houses, so they found a good forward rhythm. A tough liverpool to liverpool one stride combination leads the way to fourteen strides to destiny. Simpson let Carlsson roll right down to the base of the last big oxer, and the horse exploded off the ground, as Simpson knew he would. “And, the next thing I heard was ‘U.S.A. gold!’” Simpson recollects. “After the victory gallop, I started saluting my son, Ty, something we started in Rome. But, I didn’t know where he was, so I just saluted everywhere.”

As many know, Carlsson vom Dach was sold to Double H Farm immediately following the Games. In the bittersweet irony of history, that victory gallop was Simpson’s last ride ever on Carlsson. Their thirteen plus month odyssey from strangers to Olympic Gold partners was over. But, what a ride it was. While Carlsson vom Dach’s career never again approached that magical year, Simpson keeps on winning, including nine Grand Prix wins at the 2015 HITS Thermal circuit alone. As he concluded the interview, Simpson added, “And, after all this time, this morning I showed a horse for the first time in a 1.30 meter class that I bought myself and that has all the talent. His name is Chacco P and this time, instead of thirteen months, I have three years.” Will Simpson only glances in the rearview mirror because he still has his eyes on the road ahead.

Simpson By the Numbers

13 Grand Prix wins on The Dude

30 Years since establishment of Compton Jr. Posse, a program developed to provide inner-city youth of L.A. with year round after school alternatives to the lure of gang and drug lifestyles. Simpson is a committed member of the Board of Directors and a generous contributor of equipment, time, and effort. Will Simpson Rides On

Will Simpson has achieved the pinnacle of showjumping success: Olympic Gold. With teammates McLain Ward, Laura Kraut, and Beezie Madden, Simpson stood atop the tallest podium in Beijing, bursting with emotion as The Star Spangled Banner played.

That was 2008. Fast forward one decade. What has ten years brought to the storied team? Predictably, the horses retired. Sadly, our national sweetheart, Sapphire, died too soon. Cedric, Authentic, and Carlsson Vom Dach – we hope they are sunbathing at this moment and telling their friends in the next paddock about their exploits. The riders? They are still at it, working to stay at the top of their sport. From riding huge tracks in Europe and the U.S. to sourcing horses from all over the world looking for the next great. Some are raising families; all are teaching, training, pushing against the forces of time to stay at the summit.

Simpson is back in his native California doing what he does best- riding and training Grand Prix horses. The difference in ten years? The riding careers of his children. Ty Simpson is flying through the timers, apparently having inherited the jump off talent of his parents, Will and Nicole Shahinian Simpson. Sophie Simpson had a stellar junior career in all three rings at the horse shows. Top finishes in equitation finals, numerous hunter championships, and an Individual and Team Gold Medal in the North American Young Riders Championships are the highlights of too many victories to name. Sophie is now a successful young professional based in her native California. Trust that the North American Young Riders event will not be the last time she is seen on a podium.

Will Simpson is a self- described “national rider,” who continues to excel in the U.S. Grand Prix scene. He has an exciting young prospect in his own Chacco P, a nine year old by Chacco Blue. Simpson has been steadily moving the big bay up through the levels with his first Grand Prix win in the U.S. coming in September, 2017. He praises the horse’s bravery. “That horse, he’s a lion,” Simpson states. “He just thinks like a winner.”

In 2018 at the HITS Coachella circuit, Chacco P continued to demonstrate his talent. The pair garnered top ten finishes in three Grand Prix competitions, culminating in a win in the $30,000 SmartPak Grand Prix at the Desert Circuit VII show. “The horse has fast feet. Even though he’s a big horse, he really moves fast and keeps moving forward no matter what he’s doing.” As the west coast show circuit radiates away from Thermal, we look forward to continued success from Simpson Stables trained riders, horses, and the Simpson Family.

The Benefits of Bonding with Your Horse