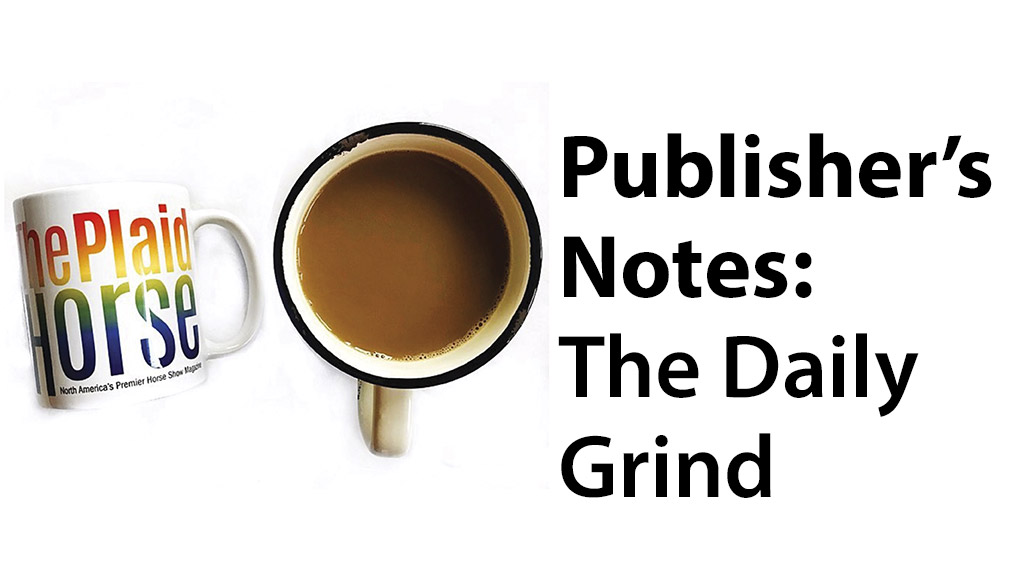 Many of these columns are devoted to my own riding because, well, it’s a wonderful thing in my life right now. After spending a lot of time involved in this sport in some manner, I am having success in the show ring for really the first time. And, it is exciting to me on so many levels – all of the emotions in me, as well as all the people I want to tell to hang on just a little bit longer – it can happen for you at any time.

In reality, my life (like most people’s) is the daily grind. I wake up to a steaming hot cup of coffee and a mountain of work every morning and tackle it until I drop in the evening. Most things I do are repetitive, sometimes monotonous, and it can be a challenge to stay motivated, disciplined, consistent, and ensure that the same level of perfection and enthusiasm goes into each project the hundredth or thousandth time I do it as it did the first dozen.

When Adam went on a research sabbatical last year from January to July, we traveled to California knowing our sojourn would entail a lot of hard work for both of us. From his research (late nights and early mornings) to my publishing, we also tried to experience everything California had to offer – visiting old friends, eating all the food, and making day trips available to us.

We expected work, excitement, challenges, but what we didn’t expect was to find new role models. Adam has always has an easier time than I have in the role models department because he has a lot in common with what you think of when you hear the word “scientist.” I never found great role models – Berkeley didn’t have any female chemists in my field while I was there.  While gender is certainly not a prerequisite for being a role model, this tells you how many women wanted to work with the men in that department. But fundamentally, I simply didn’t find people who I wanted to be like.

As I experienced more of life and immersed myself in the equine industry, I kept on my quest – what am I looking for in a role model and how can I be inspired? Neither of us realized what we were looking for in a role model until we found it. We knew many people who aged and got lazy, sloppy, and stopped putting in the hours. When we found our role models, they accomplished, they advanced, they progressed, they moved up the ladder, and then they… kept coming into work every day. Kept working, kept advancing, kept finding wonder in what they were doing into their golden years.

These were people who “could” slow down. But why would you do that and not continue with your life’s passion and work? These people didn’t have the goal of getting on top and spending time lording from the summit. These people were process driven and found the process every bit as interesting, satisfying, and creative into their later decades as they did earlier in life.

Our first time around, in our early 20s, perched on top looked pretty good to both of us. We aspired, we ground ourselves down at an unsustainable pace, we published, and we had fun while we learned. Now, as we cross into our 30s, treasuring every step, completing work ourselves, and building sustainable models for life, for health, and for our platforms look better than ever.

How to Train the Adult Amateur (and the kid of the...