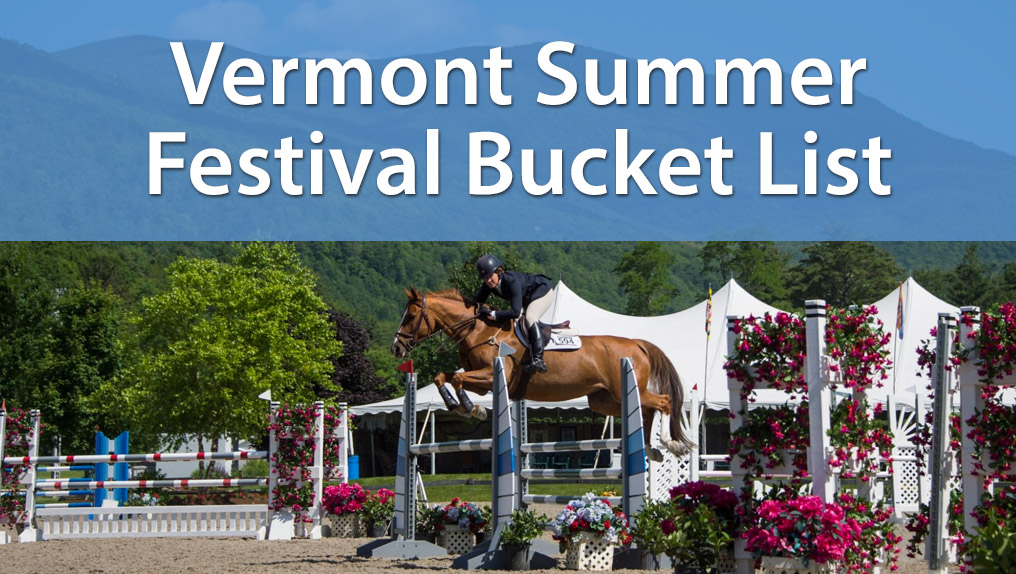 “Look at that view! How could I not enjoy myself when I’m surrounded by that?” A response like this one, coupled with a motion toward the rolling mountains of southern Vermont, is the response from most Vermont Summer Festival riders, trainers, and visitors when asked what they like most about spending their summers at the event.

When the weather warms and the days lengthen, the North American hunter/jumper community heads north. For those who go as far as Vermont, the Vermont Summer Festival is a nod to everything that a season on the road should be; a relaxed summer with exciting competition, all in a family-friendly environment. For these and many other reasons, the Vermont Summer Festival continually ranks among the shows at the top of any “must-visit show” bucket list for hunter, jumper, and equitation riders.

Take a look at all there is to love about the Vermont Summer Festival, running July 3 through August 12, 2018, at Harold Beebe Farm in East Dorset, VT:

Nestled into the foothills just south of the Green Mountain National Forest, the Vermont Summer Festival shares a home with ample opportunities for entertainment that charms children, adults, and everyone in between. The Manchester area mirrors the all-inclusive vibe of the horse show itself and is local to attractions that range from public swimming holes to mountain biking and much more.

Then there’s the food—dining while at the Vermont Summer Festival is a treat. Home to restaurants spanning the gamut of food options, Manchester and its surrounding areas are a foodie’s paradise. The perfect opportunity to test drive the options is to attend the weekly exhibitor parties hosted by a different venue each Wednesday throughout the six-week show.

If you go: Dine out! Take a stroll through the streets of Manchester, VT, and indulge in the restaurant options. Also, don’t miss the exhibitor party at Bromley Mountain Adventure Park. While the mountain doesn’t have white peaks during the summer months, it is far from boring during the summer with zip lines, miniature golf, the big splash waterslide, and more.

The Vermont Summer Festival is a hotbed for points-chasing. Qualifying opportunities span the disciplines, but the most exciting offerings are served up to hunter and equitation riders by way of a World Championship Hunter Rider (WCHR) week and ‘Equitation Tuesdays.’

Some of the country’s top hunter competitors make the pilgrimage to the Vermont Summer Festival for WCHR week, held annually during the third week of competition. After gaining points at member horse shows across the nation, including the Vermont Summer Festival, the top ten nationally-ranked riders and top six regionally-ranked riders in each category go head-to-head in the WCHR Finals at the Capital Challenge Horse Show in Upper Marlboro, MD.

It doesn’t stop there for hunters. The weekly $5,000 3’3” NEHJA Hunter Derby makes its return in 2018 to highlight the Thursday schedule and culminates with a $15,000 offering on August 9 during the sixth and final week.

Additionally, any rider with equitation finals on his or her “to do” list can check off all the boxes at the Vermont Summer Festival, which runs for six weeks in the scenic Manchester-area each summer. Thanks to weekly equitation offerings, as well as the extremely popular ‘Equitation Tuesdays’ introduced in 2013, the Vermont Summer Festival has quickly made a name for itself among equitation riders and trainers as an “Equitation Bootcamp” of sorts. With opportunities to qualify for all the major finals, Tuesdays at Vermont are host to a big group of young riders and national champion hopefuls, all with the goal of preparing for prestigious year-end goals.

If you go: Watch hunter riders cash in during the $15,000 NEHJA Hunter Derby on Thursday, August 9.

Saturdays are full of action at the Vermont Summer Festival. The show peaks each week with a $30,000 Grand Prix, held the first five Saturdays of the six-week circuit, before the season culminates with the $50,000 Grand Prix on the final weekend. The show serves as the perfect environment for tomorrow’s stars to be born with young horses and up-and-coming riders often pocketing the first grand prix wins of their careers at Vermont Summer Festival. The jumps are bigger, the riders are hungry for a win, and the sport is nothing short of thrilling!

It’s not just the riders and the horses who steal the show. The course designers at the Vermont Summer Festival are some of the best in the world. The list includes the likes of Alan Wade of Ireland, who has the prestigious appointment of course designer for the 2018 World Equestrian Games (WEG) in Tryon, NC, in September. In addition, Mexico’s Manuel Esparza, was part of the course building team at the 2016 Olympic Games in Rio de Janeiro, Brazil, while Michel Vaillancourt has the 1976 Olympic individual silver medal to his credit.  All three will bring their talents to Vermont this summer.

If you go: Make it a Saturday outing! Purchase a ticket for one of the weekly grand prix events to benefit the Manchester Community Library, Meals on Wheels of Bennington Country, and Rotary Club of Manchester, and join the conversation by using tags #VSF2018 and #summerinvermont on social media.

Want to find out more about the Vermont Summer Festival?
Visit www.vt-summerfestival.com, or find it on Facebook and Instagram.