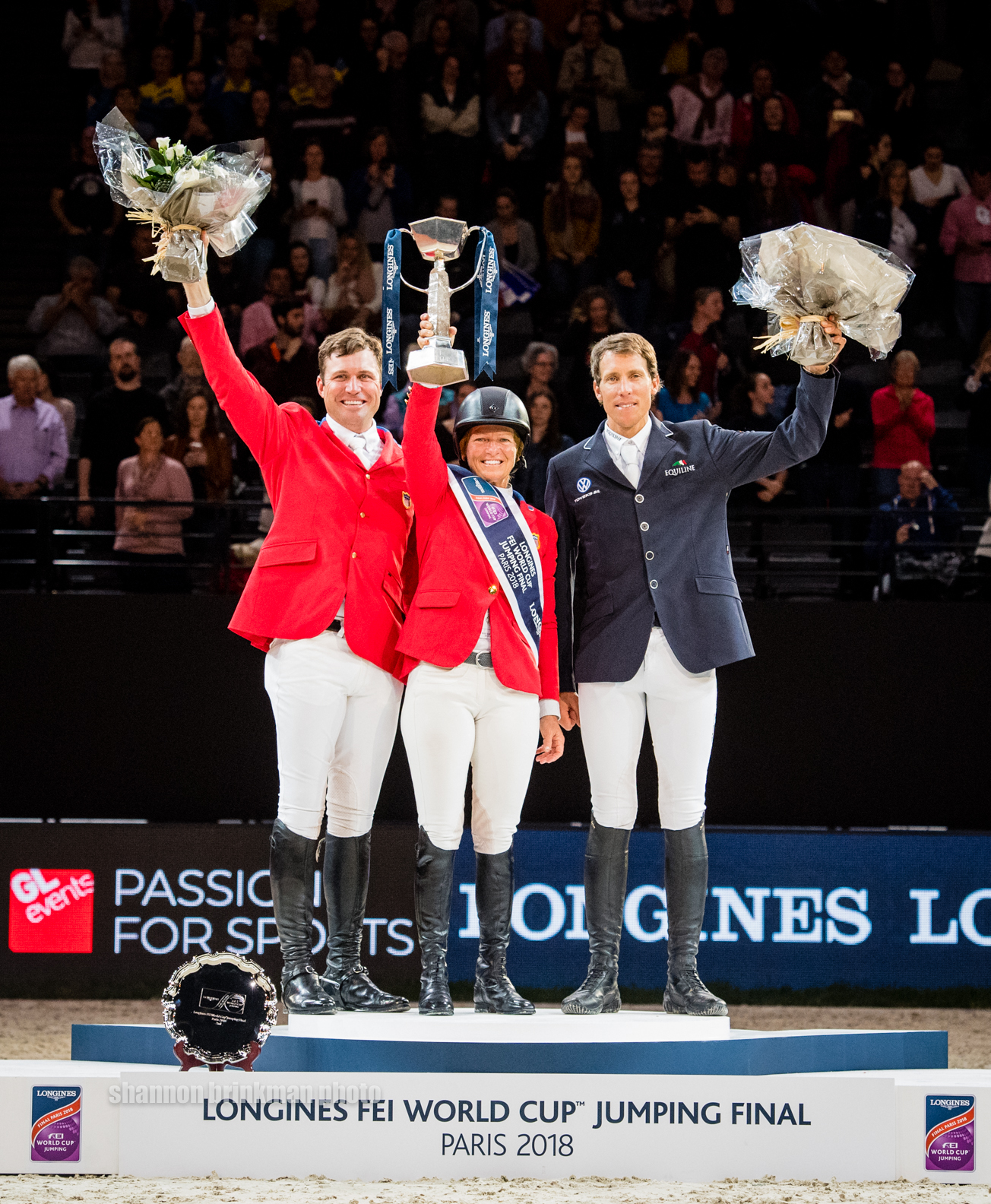 Paris, France – The podium was decorated in stars and stripes Sunday evening as Beezie Madden and Breitling LS claimed victory at the Longines FEI World Cup Jumping Final. Not far behind her, with only six penalties, fellow American Devin Ryan and Eddie Blue stamped their names on second. Madden (Cazenovia, N.Y.) finished on a single rail in the second round of the Final III, after jumping three previous clear rounds on Thursday, Friday, and again in the first of two rounds on Sunday evening.

The crowd held their breath in round one as Madden guided Abigail Wexner’s 12-year-old Dutch Warmblood stallion clear in his very first major championship. Ryan (Long Valley, N.J.) and von Eckermann both jumped clean rounds before her, adding to the pressure heading into the final round of the evening.

“[Breitling LS] felt great. I think this is the biggest course he has had to do,” said Madden. “He really rose to it. I think the main test on this day is how much gas in the tank you have left, and how much the horse is willing to dig in. It [was] still really close, because Devin and Henrik kept the pressure on by going clear.”

The four-time Olympic medalist and Breitling LS rode into the ring as the last combination in the second round. Ryan and Eddie Blue preceded them with a clear round, while von Eckermann dropped one rail. Madden and Breitling LS could afford one rail and a time fault without the threat of a jump off. They dropped one rail at the ‘b’ element of the triple combination at fence six, and the crowd held its breath in anticipation as they finished the course. As Breitling LS’s hind feet cleared the last fence, Madden had earned her victory. Watch her winning ride here.

When asked about hearing the one rail drop, Madden responded, “[I was] a little nervous, but I still thought my horse was jumping well, and all you can say at that point is keep it together and finish on four [faults] and try to get it done.”

“It is always exciting to win a championship, and two of these is pretty amazing,” Madden continued. “I was so happy that my owner, Abgiail Wexner, was here today to see. I am so happy for her and the rest of my team, my husband John, and the horse, especially. Also, what a fantastic week for the Americans, with three in the top-four. It’s really exciting.”

Madden won the Final in 2013 aboard Simon. The thrill of victory is just as sweet the second time around, both with horses Madden has had a strong partnership with.

“It’s double exciting, I guess,” said Madden with a smile. “I won in 2013, and to win here with [this] horse – we really believed in him, but it took a little while for him to mature. So for him to come through today was fantastic. It has taken a little while to replace Simon and Cortes, but it actually happened a little quicker than I thought it might, so this is really exciting today.”

Not far behind Madden in the race for the top of the podium, was World Cup Final newcomer, Ryan with Eddie Blue. The only combination to have no rails down in all four rounds of the final, the young Eddie Blue impressed not just the fans, but also his rider.

“[Eddie Blue] felt really nice and fresh, and he is jumping solid,” said Ryan. “He is a young horse and he has never had to jump in a championship format before. So coming out of the ring, I said to myself, ‘Man, he is everything. He can go day after day and jump big classes.’ He felt fresher today and jumping better than the first day. I am really proud of him, and really happy with the way that he is going. He has done his job the whole trip.”

Finishing just a mere two points behind the veteran Madden, Ryan expressed his enthusiasm over sharing the podium with her. “To be second behind Beezie – she’s a legend in our country,” said Ryan. “Beezie, McLain, any of them – it’s always a good place to be. This is my first championship and it is fantastic. I am proud to be an American today. Proud to be beside Beezie.”

“I thought ‘Annie’ was brilliant,” said McLain of HH Azur. “The first two days you have to do as well as you can. I have a really good horse and I don’t want to let her down.”

Two fellow American combinations jumped the final round of the evening as well. Alison Robitaille (Upperville, Va.) and Ace, the 13-year-old KWPN gelding owned by Bertram and Diana Firestone, finished in 14th with 24 faults. Jamie Barge (Malibu, Calif.) and Luebbo, the 13-year-old Oldenburg Springferd gelding owned by Kyle Co., finished in the 16th position with 27 faults.