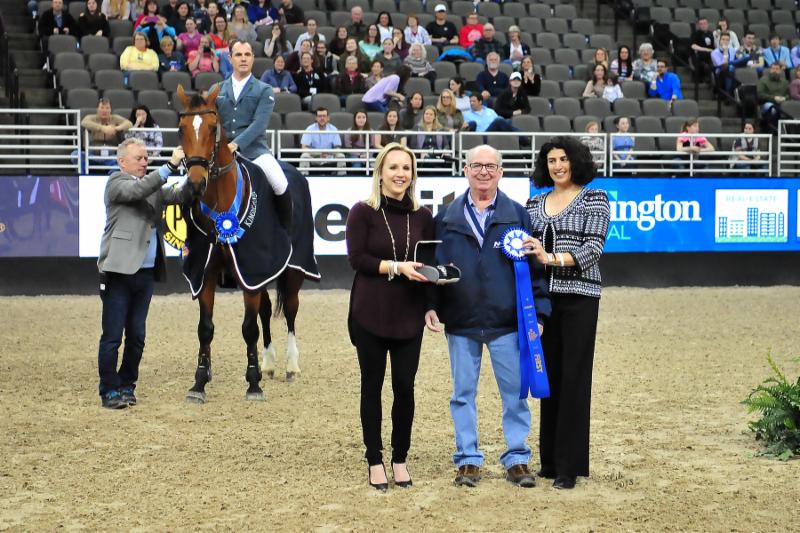 “I thought that this was a great class and the crowd really was into it,” said Heineking, dubbed the “Heineking of Omaha” for his four Grand Prix wins in the first five years of the International Omaha. “The InIt2WinIt Series has been great for the Midwest and the speed format makes it very exciting for the crowd.”

Heineking’s time of 52.169 seconds was nearly two seconds faster than the 54.060 turned in by Michael Burnett who placed second on Iron. Finishing third was Lisa Goldman who finished in 54.636 seconds on Hindsight. “Iron is really fast and I mostly just try to stay out of his way,” Burnett said of his partner of the last 11 years. “He is a great horse and I am very lucky to have him.”

Overall, only four of the 22 horses rode fault-free over the course designed by Bernardo Cabral of Portugal; but with just two seconds added for each rail, riders with rails never felt out of contention. “I think this format makes it so much more exciting for the spectators,” said Goldman, “and the riders keep going because we know that we’re never out of it. It makes the whole class faster.”

A crowd of 4,274, including Nebraska Governor Pete Ricketts and former Governor and Senator Ben Nelson, created an electric atmosphere inside the CenturyLink Center. Special tributes to military and first responders added to the crowd’s enjoyment.

As part of its commitment to developing jumping in the Midwest following its successful production of the 2017 FEI World Cup™ Finals, the Omaha Equestrian Foundation (OEF) created the InIt2WinIt Speed Jumping Series. The series of 1.40-meter speed jumping events sanctioned by the United States Equestrian Federation (USEF), culminated with the $100,000 Championship at 1.45 meters.

“Part of our strategic plan is to create opportunities for high performance athletes from the Midwest and also to develop young riders by providing them with a clear path to higher levels in the sport,” said Lisa Roskens, chairman of the Omaha Equestrian Foundation. “We are also committed to changing the way the sport is presented in this country and I believe the InIt2WinIt Series is doing just that.”

Saturday will feature the Jumping Showcase with a clinic by legendary show jumping trainer George Morris. One of the riders in the George Morris clinic will receive the $1,000 KindredBio Horsemanship Award. Saturday’s competition highlight will be the final round of the Dressage Team Challenge. The International Omaha will conclude Sunday with the $130,000 International Omaha Grand Prix.

The four-day event also provides expanded educational opportunities for emerging athletes and young people as well as family fun for all ages. There are exhibits and demonstrations, along with shopping at a variety of unique vendors from across the United States, a range of dining choices, and live entertainment featuring some of Omaha’s finest.

Further information about International Omaha is available on line at www.InternationalOmaha.com where competition can be watched live. To reserve tickets or seats, please call 402-930-3079 or email ContactOEF@OmahaEquestrian.com.

The Omaha Equestrian Foundation (OEF), a certified 501(c)(3) not-for-profit foundation, has been committed to building a world-class equestrian experience in Omaha over the past several years. It created and developed The International Omaha, an internationally sanctioned equestrian show jumping and dressage experience now in its sixth year. The successful growth of that event helped secure the OEF’s bid to host the internationally-acclaimed 2017 FEI World Cup™ Finals.