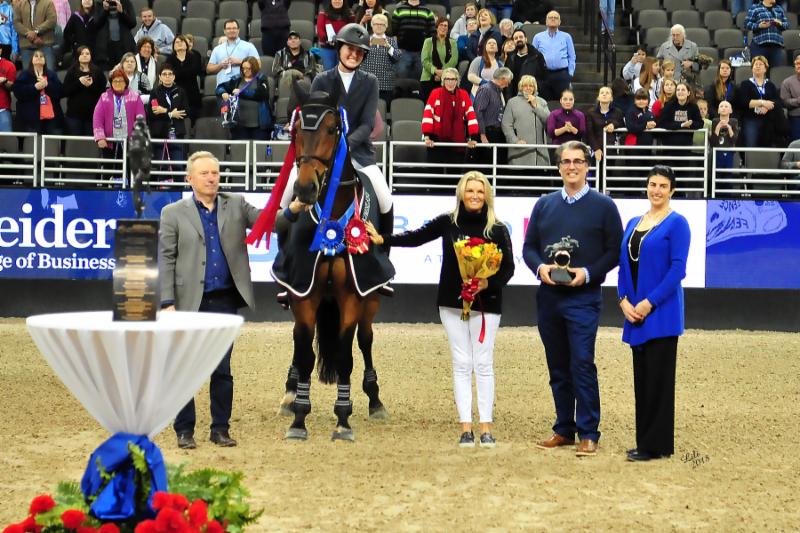 Eight of the 24 horses rode fault-free over the 15-effort, first-round course designed by Bernardo Cabral of Portugal. The first to return for the 8-effort jump-off course was Christian Heineking who won the Grand Prix four times in the first five years of the International Omaha. He set the mark to beat with a clean ride in 33.873 seconds on NKH Selena.

Two rides later, Holloway took over the lead with a clean ride in 32.585 seconds on VDL Bravo. Heineking then returned on NKH Caruso, the horse on which he won Friday night’s $100,000 RFD-TV InIt2WinIt Speed Series Final. He finished in 32.414 seconds to beat Holloway’s time, but a rail down at the last fence cost him four faults.

After the next two riders had knockdowns, Holloway returned on Eastern Jam, knowing she already had the win. Rather than riding conservatively, she thrilled the crowd of 4,186 with a clean ride in 29.990 seconds to claim the top spot and also finish second on VDL Bravo. Heineking placed third on NKH Selena and fourth on NKH Caruso.

“Although he had a rail, Christian had beaten my time so I knew it could be done,” said Holloway who hails from nearby Topeka, Kansas. “I wanted to see if Eastern Jam could do it and I was bound and determined to beat Bravo’s time. I left out a stride at three different places and it worked out great.”

Heineking said that he was impressed with Holloway’s final ride. “I thought both her rides were great, but what she did to finish the class was really impressive,” he said. “There was nothing that I, or anyone else, could have done to beat her today. She put in a spectacular performance and deserved to win!”

Lisa Roskens, chairman of the Omaha Equestrian Foundation (OEF), was thrilled with the finale and the success of this year’s International Omaha. “It’s hard to imagine a more exciting class than what we saw today,” she said. “What Hunter did on her last ride showed our sport at its best and I’m not sure I’ve ever seen a standing ovation from the whole crowd like we saw today. OEF is committed to bringing new fans to our sport and helping it grow and this year’s horse show is another step forward in achieving our goal.”

Holloway reinforced that sentiment, saying, “This is really a special horse show. The crowds are huge and enthusiastic and everyone goes out of their way to do whatever they can for us. I know all of the riders love coming here.”

Classics were held in three divisions prior to the Grand Prix. Grace Hoover rode Willie d’Lothian to the win in the $5,000 National Equestrian Center 1.10m Classic; Genevieve Munson rode Camee to the win in the $10,000 Lugano Diamonds 1.20m Classic; and Briley Koerner rode Jef VD Wezelse to win the $12,500 Kiewit 1.30m Classic.

In addition to the show jumping and dressage competition, the four-day event also featured expanded educational opportunities for emerging athletes and young people as well as family fun for all ages. The educational opportunities were highlighted by the Dressage Foundation Dressage Showcase featuring a clinic with German Olympic dressage team Gold Medalist Hubertus Schmidt and the Jumping Showcase with a clinic by legendary show jumping trainer George Morris where one rider, Izabella Baxter of St. Louis, received the $1,000 KindredBio Horsemanship Award.

Exhibits and demonstrations, along with shopping at a variety of unique vendors from across the United States, a range of dining choices, Omaha Steaks Opening Ceremonies and live entertainment featuring some of Omaha’s finest, added to the entertainment.

Further information about International Omaha, including full results of all classes, is available on line at www.InternationalOmaha.com.

The Omaha Equestrian Foundation (OEF), a certified 501(c)(3) not-for-profit foundation, has been committed to building a world-class equestrian experience in Omaha over the past several years. It created and developed The International Omaha, an internationally sanctioned equestrian show jumping and dressage experience now in its sixth year. The successful growth of that event helped secure the OEF’s bid to host the internationally-acclaimed 2017 FEI World Cup™ Finals.