Home Press Release Minikus and Raposa Best Competition During Week One of the ESP Spring... 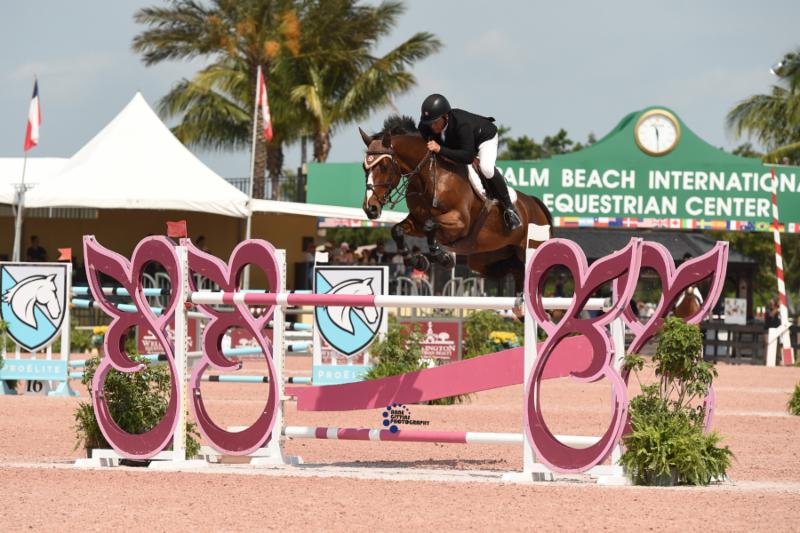 Above: Todd Minikus and Quality Girl

Wellington, FL – April 10, 2018 – It was a first place finish for Todd Minikus of Lake Worth, FL and the Quality Group’s own Quality Girl last week during ESP Spring I at the Palm Beach International Equestrian Center (PBIEC) in Wellington, FL. Minikus and the 2003 Oldenburg mare bested a field of 27 horse and rider starts and were the ultimate victors in the $35,000 ProElite® Grand Prix on Sunday, April 8.

The class was the mare’s return from some time off over the winter season and Minikus intends to bring the mare back slowly before going full speed into the summer. “I didn’t think there was much sense in bringing her back just to show her in the last two weeks of WEF,” commented Minikus. “I thought I’d wait until post-circuit to bring her back. It’s nice money in these classes, so it was all good! We’ll let her get rolling again in these classes and then I expect some big stuff this summer.”

Guilherme Jorge (BRA) laid the week’s final track, which welcomed back ten to contest the jump-off. Minikus, who rode through the timers in 38.119 seconds, finished nearly two seconds ahead of second place finisher Emanuel Andrade of Wellington, FL, and his own Ricore Courcelle who finished in 40.148 seconds. Kevin Babington of Gwynedd Valley, PA, and Double O Seven 7 rounded out the top three, ending the jump-off in 41.141 seconds.

David Raposa of Clinton, NY, piloted his own Iliona to the top of the $25,000 ProElite® Welcome Grand Prix. Raposa and the 2008 Belgian Warmblood mare scored the win after completing the jump-off in 46.364 seconds, just two tenths of a second faster than second place finishers Alonso Valdez Prado and Chicester 3.

Prado, who represents Peru, guided his mount through the timers in 46.54 seconds. Third place honors were awarded to Anslemo Alvarado of Wellington, FL, and Quentin, owned by Alvarado. The pair raced around the track in 53.149 seconds, knocking one rail and receiving the yellow ribbon for their efforts.

Pablo Barrios of Wellington, FL, and Le Vio, owned by Gut Einhaus, LLC, rode to victory in the $10,000 ProElite® Open Welcome Stake after completing their jump-off trip in 33.096 seconds ahead of Abigail McArdle of Barrington, IL, and Delia B, owned by Plain Bay Sales, who took second with a time of 33.641 seconds. Taylor Flury of Minooka, IL, and Carrasca Z, owned by Aliboo Farm, Inc., earned third place after riding to a jump-off time of 33.658 seconds.

The $1,500 NAL Child/Adult Jumper Classic was championed by Juana Trosch of City Bell, BU, and Alexis Trosch’s CBC Corvet II Z finishing the jump-off track in 28.525 seconds. Dakota Champey of Far Hills, NJ, and MDHT Equestrian, LLC’s Escape captured second place with a jump-off time of 28.856 seconds. Kyle Olson picked up third place in the class, piloting his own Wilhelmina with a time of 30.224 seconds.

The $5,000 Omega Alpha® 1.35m Stake saw Emanuel Andrade of Wellington, FL, and Dipssy, owned by Andrade, take first place, stopping the jump-off timers in a quick 35.723 seconds. Abigail McArdle of Barrington, IL, and Fanta Light B, owned by Plain Bay Sales, took home second place after finishing the track in 37.453 seconds. McArdle also scooped up third place aboard Delia B, finishing with a time of 37.819 seconds.

The $1,500 M&S Adult Jumper Classic was championed by Dana Ventrice of Pompano Beach, FL, riding her own Dollard Jessy Stable, bested the jump-off in 36.461 seconds. Second place went to German Camargo of Loxahatchee, FL, and Mr. Boombastic, owned by Sofia Jaramillo, who rode through jump-off timers in 37.746 seconds. Third place was captured by Kyle Olson of Sherman, CT and S&L Jacob, owned by S & L Farms, concluding their jump-off in 40.535 seconds.

Natalie Picot of South Hampton, NY, was the winner of the $1,5000 Low Child/Adult Jumper Classic riding Secreto owned by Cristobal Diaz, who completed their jump-off time in 36.802 seconds. The red ribbon was awarded to Anne Werdiger of Purchase, NY, and Quido 13 after completing their round in 43.48 seconds. Saylor Shea of Granger, IL, and Ultimate VDL owned by Treesdale Farms, rounded out the top three, achieving a jump-off time of 37.614 seconds but with 4 added faults.

Victoria Colvin of Loxahatchee, FL, and Always, owned by Victoria Colvin LLC, took top honors in the $5,000 USHJA National Hunter Derby during ESP Spring I with a total score of 187. Rush Weeden of Antitoch, IL, and Upstate, owned by Glory Days Farm, LLC, rode to second place with a final score of 184, while Weeden and Dolce finished in third place, completing two rounds with a total of 177.

The Wanderers Club Children’s Pony Hunter Division saw Taylor Cawley of Wellington, FL, and Ju-Ju B, owed by Cawley, take the division championship ahead of Cecelia Perry of North Venice, FL, and her own Quicksilver Patriot, who secured reserve champion honors.

Hannah Isop of Pawlings, NY, and Billy Cavalier, owned by Donna Miller, were champions of the USHJA Hunter 3′ Division, while reserve champion was awarded to Jennifer Papiernik, riding Avellino, owned by Allison Moynihan.

The Medium Pony Hunter Division saw Kat Fuqua of Atlanta, GA, and Finesse RF, owned by Fuqua, rise to the top of the division. Savonna Adell of Bloomfield Hills, MI, and Laugh Out Loud, owned Adell, captured reserve champion honors for their efforts in the division.

Competition will resume at PBIEC on Wednesday, April 11, with the second week of the ESP Spring Series continuing through Sunday, April 15. For more information please visit www.pbiec.com.

Photo Credit ©AnneGittinsPhotography. These photos may only be used once in relation to this press release.