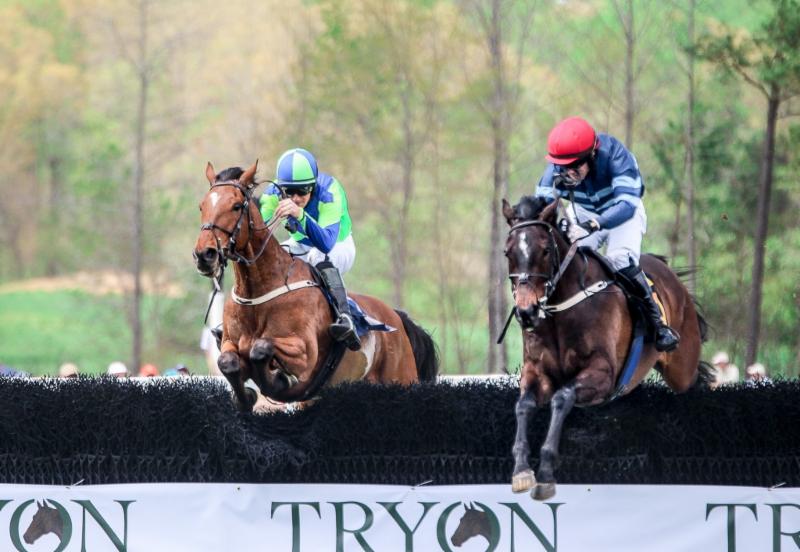 Columbus, NC – April 15, 2018 – In stunning back-to-back wins at the 72nd Annual Tryon Block House Races on Saturday, April 14, jockey Sean McDermott was awarded the Top Jockey award and honored for his efforts in the coveted Block House Race, as well as in the Dr. John Bradshaw Memorial Race. The iconic event featured five thrilling races in front of a packed crowd at the Green Creek Race Track for the second consecutive year.

Humbly, McDermott gave credit to his horses and support team for the victories: “Two wins today – though I wish it was three! You can’t do it without the horses, and [trainer] Jack Fisher traditionally starts his a little late [in the season] and we use their first few races as a prep, and it sets them up nicely for their second runs of the season. They have a bit of longevity through the season. If you’re not on the horses you can’t win the races, and we’re grateful to have all the good horses we do that make our job easy.”

Founded by the Tryon Riding & Hunt Club 72 years ago, the Tryon Block House Races is now produced and managed by the Tryon International Equestrian Center (TIEC). The event drew 39 entries across five races throughout the afternoon chasing $130,000 in prize money. Each race included two laps around the course, and six hurdles adorned the rolling 2 1/8 miles of track.

The highlight race for the day, The Block House, saw six entries fly around the track in three minutes and 55 and two-fifth seconds. McDermott and Gibralfaro took top honors and were awarded The Roger Smith Cup, presented by Roger and Jennifer Smith, after a tight battle with Lord Justice, another Irish-bred and Jack Fisher-trained horse.

“That’s a beautiful horse,” McDermott said of Gibralfaro. “Riverdee Stables have just imported him from England, and it’s very difficult for a horse to win his first time off the boat over here, given the ground conditions and the different types of hurdles, so it’s just a credit to his honesty and his engine that he got it done, and I’m sure he’ll only improve.”

Of his second winning mount, Overwhelming, McDermott revealed that the horse’s previous wins over hurdles made him a strong contender coming into the flat race, as the horse is in top form after being rehabbed throughout all of last season for a minor injury.

“Overwhelming is a class horse – I think he’s won three stakes over hurdles. We had a little prep run in Camden and a training flat race, so today we thought he’d win,” McDermott admitted. He goes well on this ground, but he’s had a small tendon injury in the past and so this was the best fit for him in his schedule, and we’re very happy. It was a lovely stepping stone for him, and I presume he’ll go for a hurdle race now. He’s a tough horse over two miles over hurdles – he’s a good cruising speed and we’re very happy with him.”

National Steeplechase Association Director of Racing, William Gallo, Jr., raved about the event’s success. “This is my favorite race,” he emphasized. “It’s my second year here. I was very impressed by this venue last year, obviously for its inaugural event, but it’s a marvelous race course. The horsemen really like it. You can tell by the entries – it’s well-supported and it’s got so much potential for the future as well. I could see it being a permanent site, and being a premier racetrack in America for Steeplechase racing.”

McDermott was not the only jockey to pull off a double on the day – Shane Crimin also took home two first place finishes: first in The Carter P. Brown Memorial maiden claiming race at the beginning of the event aboard Magalen O. Bryant’s Bob’n for Silver, and again in the Tryon Riding & Hunt Cup Ratings Handicap Hurtle, guiding Life Said for trainer and owner Richard L. Valentine.

“He’s not the fastest,” Crimin said of the grey gelding. “I just let him roll along and he comes away, so it was pretty straightforward with him. The track rode beautiful today – it’s nice. I was here last year and had three seconds, so hopefully it ends up better today.”

Sure enough, Crimin delivered a winning ride aboard Life Said just two races later in the Handicap Hurtle, beating out ten other pairs: “This one was different [than the last] – he [has] more of a gear and I can just sit and ride me race and just creep away into it like he did. While the other fella [Bob’n for Silver] is a bit slow in the gallops, this one has a turn of foot, so two very different rides.”

The Cannon Harmon Memorial Race was won by Last Shani with Jack Doyle in the irons, beating out five other entries to bring home the trophy on his very first run over hurdles. Doyle commented on the nature of the track, to which he’s been twice: “I was here last year, and the track is in great condition. You want a quick horse around here – it’s a pretty thick track, but it rides fair. It’s nice,” he said. “It was this horse’s first run over hurdles, so he was a bit green early on, and it took him a while to get going, but then going into the second to last [hurdle] he jumped out well and got a nice run out and won nicely.”

The day included various spectator contests, including a hat contest, tailgate awards, and “Go to Heck” pants contest, in addition to stick horse races following the mounted races, all of which combined for exciting and entertaining spectator experiences.

“The Tryon Block House Races have become a very important part of what we offer at the Tryon International Equestrian Center,” commented TIEC Chief Operating Officer Sharon Decker. “We are thrilled to have the opportunity to do this event and to bring it to this magnificent location.”