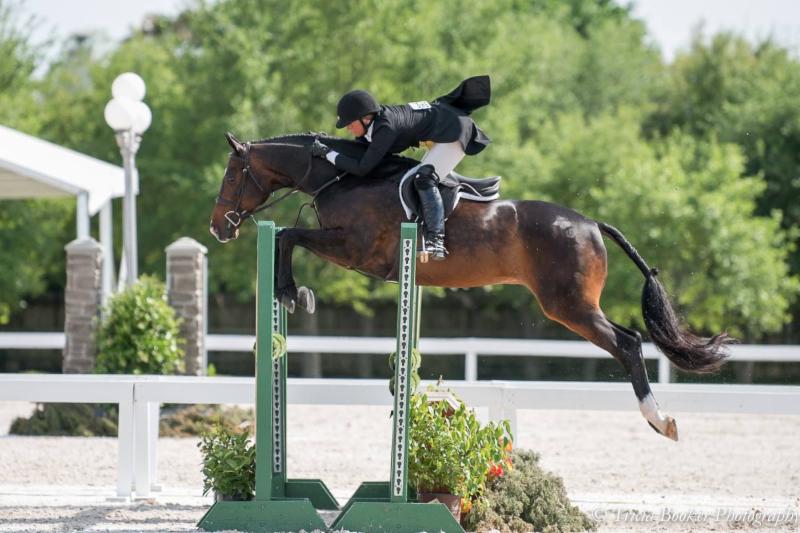 Above: Jennifer Alfano and Candid

Katy, Texas – April 9, 2018 – The team at SBS Farms, Inc. headed to the Lone Star State to compete in the prestigious Pin Oak Charity Horse Show in Katy, Texas, where they continued their winning momentum from the HITS Ocala Winter Circuit to secure multiple championships in a variety of divisions over the course of three weeks. As one of the finest hunter/jumper show stables in the Northeast, SBS Farms, led by Susie Schoellkopf, is notorious for producing horses and riders at the highest levels of the sport.

Alfano also piloted multiple mounts in the Green Hunter divisions, where the veteran hunter rider rode Sharon O’Neill’s Talladega to a first place over fences and in the stake class, as well as a second place in the undersaddle, for the Green 3’6″ Hunter championship. She also earned top placings in the Green 3′ Hunter division with her own Cooper and Fortune, owned by Molly Gfroerer.

Emma Walters laid down flawless trips in the Large Junior 16-17 3’3″ Hunters to secure the championship tricolor with Crisp, owned by the Buffalo Therapeutic Riding Center, including a win in the stake round and undersaddle class as well as a second place in the handy.

Alfano rounded out the first week on a high note riding her longtime derby partner, Miss Lucy, owned by O’Neill, to a second place finish in the $30,000 USHJA International Hunter Derby. She also delivered a stand-out performance with Talladega to win the 3’6″/3’9″ Texas Super Stake and finished third with Fortune in the USHJA Green Incentive.

Week Two brought more top ribbons back to the SBS Farms tack room. In the Green 3′ Hunters, Alfano rode Fortune to a one-two punch over fences in addition to placing second in the stake round. Debbie Marks’ Fairlife also had consistent trips with Alfano in the same division. Furthermore, Fortune placed fourth in the USHJA Green Incentive, while Talladega finished second in the 3’6″/3’9″ Texas Super Stake with Alfano.

Chiaf continued her success in the Amateur-Owner 36 & Over 3’3″ Hunter division with Silver Lining and Sweetwater, while junior riders, Gfroerer and Walters, also showcased their talent during the second week of competition on behalf of SBS Farms. Gfroerer guided Fortune to great trips in the Modified Children’s Hunters, while Walters and Crisp captured the blue ribbon over fences in the Large Junior 16-17 3’3″ Hunter division.

The team at SBS Farms will head back home to Buffalo, New York, for a much deserved break before continuing on with their spring competition schedule at the Kentucky Spring Horse Shows and Devon Horse Show in May.