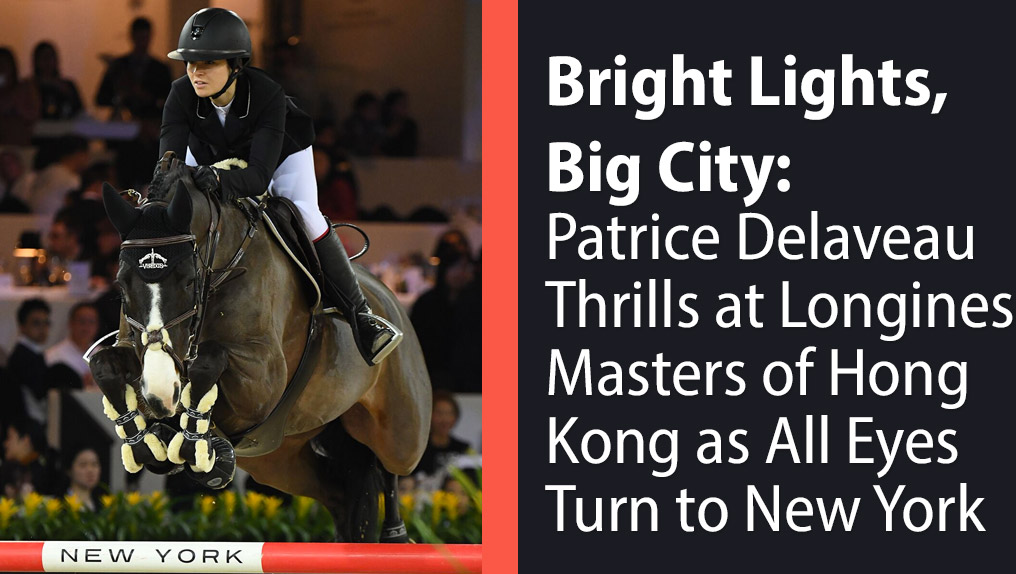 Horses in iconic cities is a phenomenon that has taken show jumping by storm in recent years, and none do it better than the Longines Masters. Traveling to Hong Kong in early February, the third season of the Longines Masters includes a final stop in New York on April 26-29, 2018, after an opening event in Paris in December 2017. As the star-studded event took up its place at the helm of the inaugural Asia Horse Week, it wasn’t ‘over ‘til it was over’.

At the peak of competition, Patrice Delaveau claimed the Longines Grand Prix for his home country of France riding Aquila HDC. The victory came over Austrian Max Kühner on Cielito Lindo 2 by just 0.07 seconds in a 12-horse jump-off, and unseated Germany’s Daniel Deusser from his Grand Slam Indoor track. Finishing third aboard Cornet D’Amour, Deusser clinched the Longines Grand Prix of Paris at the end of 2017 and was inevitably eyeing the Grand Slam Indoor title and the super bonus of €2.25 million, achieved by winning three consecutive Longines Grand Prix in Paris, Hong Kong and New York in the same season.

“It was great today, and my horse was fantastic,” said Delaveau, who won the $382,800 purse in front of a packed house at the AsiaWorld-Expo in the heart of Hong Kong. “I love it here in Hong Kong.”

The focus now shifts to Delaveau, who has a chance to collect the Grand Slam Indoor bonus of €1 million if he can win the Longines Grand Prix at the final leg of the current season of the Longines Masters Series in New York, and follow it up with a win in Paris at the start of the 2018-2019 season.

Throughout three days of exhilarating competition, the Longines Masters of Hong Kong also saw victories from Emanuele Gaudiano of Italy aboard Einstein in the Table A competition of the Masters One AsiaWorld-Expo, Clarissa Lyra and Vincent Ho of Team Dash from Hong Kong in the Hong Kong Jockey Club Race of the Riders, Germany’s Philipp Weishaupt on Chacon in the prestigious Longines Speed Challenge, Michael Whitaker riding Valentin R in the Maserati Masters Power, and fellow countryman Robert Smith atop Cimano E in the event’s penultimate class, the Masters One DBS.

Also competing in the Masters One DBS was American Olympian Reed Kessler, who took home fourth place and also finished ninth in the Longines Speed Challenge. Kessler will be traveling to all three continents this season as the only American to compete in each leg of Season III of the Longines Masters Series.

“It is fantastic to see riders from China, Hong Kong, Chinese Taipei, and Australia are able to compete at the Longines Masters of Hong Kong alongside the best riders in the world,” said Christophe Ameeuw, Founder & CEO of EEM and the Longines Masters Series.” On the occasion of the first edition of the Asia Horse Week, the participation of these riders shows how the sport is developing in this region and globally.”

Speaking specifically about Asia Horse Week, Ameeuw continued, “We want to create an annual rendezvous for the international equestrian players to bridge the knowledge, interests, and know how between Asia and the rest of the world, an event where ultimately the entire equestrian culture and all horse-related professions and sports are represented.”

Throughout the one-of-a-kind event, nearly 200 hundred equestrian experts attended the forum and it was broadcast and translated live on social media and EEM.TV, with many influential media outlets present. Held alongside the Longines Masters of Hong Kong, the summit has already rightly earned its place on the calendar, assuring it will be a staple on the international equestrian stage for many years to come.

With the Longines Masters of Hong Kong in the books, Season III of the Longines Master Series will host its grand finale in New York on April 26-29, 2018, as the world’s top riders travel to compete in a debut New York event at NYCB Live, home of the Nassau Veterans Memorial Coliseum. It will be the largest indoor event in New York since the National Horse show left Madison Square Garden. Notably, after a successful launch at the Longines Masters of Paris, the second leg of the inaugural Riders Masters Cup, presented by EEM and EEF, will be staged in New York. A brand-new type of equestrian competition, the Riders Masters Cup pits the United States and Europe against each other in an exhilarating head-to-head team matchup. Europe took the glory in Paris, but the United States team is stacked and ready for a comeback on home soil this spring.

Tickets for the 2018 Longines Masters of New York are available for purchase
at ticketmaster.com. Fans can stay updated on the news from each team at
RidersMastersCup.com and show their support on social media with the hashtags #WaveYourFlag and #WeRideTheWorld.

Set in the three of the world’s most symbolic cities – Paris, Hong Kong, and New York – the Longines Masters series is recognized as one of the most prestigious events in the equestrian world. Created by EEM and known as the “Grand Slam of Indoor Show Jumping”, the Grand Slam Indoor is the ultimate challenge for the world’s elite show jumping riders. For more information, visit longinesmasters.com.

Rain Gear for Every Horse Show