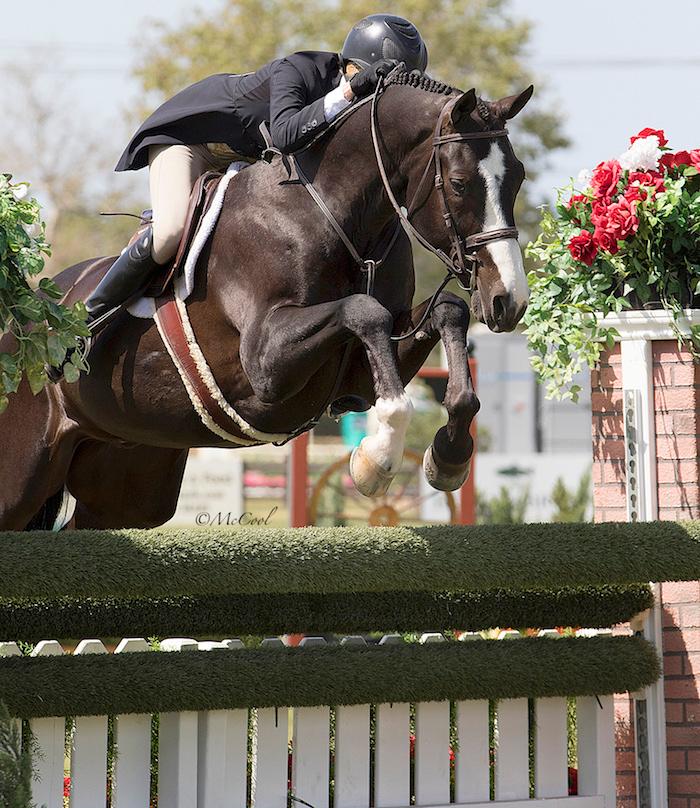 Above: Jenny Karazissis and Really

April 13, 2018 – San Juan Capistrano, CA – Coming into the handy round in second place, the Derby Queen Jenny Karazissis moved up to win the $10,000 USHJA International Hunter Derby aboard Really, owned by Michelle Cobb. Galloping on the grass at the Rancho Mission Viejo Riding Park at San Juan Capistrano, Karazissis topped a field of thirty-one entries. The pair finished with a two-round total of 390 points, while John French, the Derby Master, rode Laura Wasserman’s Skyhawk to a second-place finish, scoring a total of 389 points.

The two judging panels for the class consisted of Kim Dorfman and Mark Jungherr as panel one. Meg Schulman and Brian Lenehan comprised the second panel. Alan Lohman designed two beautiful tracks on The Oaks International Grand Prix Field. Twelve horses advanced to the Handy, where tight inside turns combined with spaces to gallop made for an exciting finish. Lohman set the high option fences up to 4’9″, and Karazissis took full advantage of the extra points, taking all four high option fences in each round with ease. For his impressive performance in the second round, Really received eight and seven handy points from the two judging panels, respectively.

“This is Really’s first Derby win and he’s really special, he’s really relaxed. We’ve been second in a few derbies together, but he really felt like he was relaxed today. He has all the scope in the world, I never doubt him at the high options,” Karazissis said of her winning mount.

Along with earning the tri-color ribbon, Karazissis walked away with an EquiFit Essential Hunter girth and a pair of Roeckl Sports gloves. She also earned fourth and seventh place ribbons on Big Shot and Legacy, respectively. “I’ve ridden Legacy for a few seasons now. He’s a great horse, very brave and very confident. This was only Big Shot’s second derby, so I was very pleased and impressed with him. Legacy and Really are already qualified for Derby Finals, so I’m planning to show them there, and I’d like to get Big Shot qualified to go as well.”

Special sponsored awards also went to riders, owners, trainers and grooms. After having amassed well over 400 points in the past two weeks, the HABiT by Valencia Sport Saddlery Leading Professional Hunter Rider Award was presented to John French.

Michelle Cobb received the Balmoral Winning Owner Award, a trophy, and two USHJA embroidered items – a cooler and a halter – for her horse Really’s victory. It was Devin Gibson who earned the Blue Ribbon Blankets Winning Trainer Award.

Iwasaki, who rode her mount Vanderpump with aplomb over each of the high options in the Handy Round, took home The Plaid Horse High Scoring Junior Rider Award.

The Makoto Farms Groom’s Award for Best Turned Out Horse went to Gaspar Navarro for his work with Grace Russo’s Banksy, who was ridden by John French to a third-place finish.