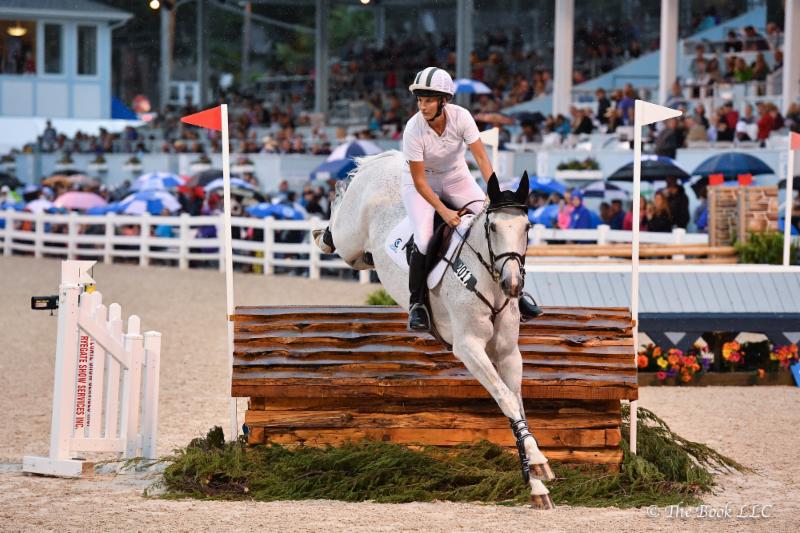 Above: Sarah Kozumplik Murphy and Rubens D’Ysieux. Photo by The Book LLC

Devon, Pa. – April 17, 2018 – The Devon Horse Show and Country Fair is excited to be offering the $50,000 Arena Eventing Class once again. The event, which is presented by Salt Works, will return for its second year after immense success during its debut in 2017.

This year’s class will take place on Sunday, May 27, at 7 p.m. It will focus on highlighting two out of three components of the classic three-day eventing format which showcases dressage, show jumping, and cross country. In order to qualify for this unique opportunity, riders must have attained a qualifying score in a CCI** event or be competing at 1.40m in show jumping.

Last year’s winner of the inaugural $50,000 Devon Arena Eventing class was Sarah Kozumplik Murphy riding Rubens D’Ysieux. The four-star level American eventing athlete had nothing but praise for the addition of the new arena eventing class.

“I was really excited when I heard this was being offered for a variety of reasons. Thank you to everyone for putting it on. Devon is just an incredible place and it’s an honor to ride here,” Kozumplik Murphy said.

The course will be designed by Olympic gold medalist Captain Mark Phillips, former coach of the U.S. Eventing Team, and will consist of a combination of cross-country and show jumping obstacles in the iconic Dixon Oval to highlight the best of the eventing discipline. Forty riders will try their hands over the challenging track.

Phillips, who also designed the course for last year’s event, had similar sentiments as Kozumplik Murphy.

“I think that they have a really good format at Devon, where they have the first round against the time and then they take all the clears and the best twelve through to the second round against the clock. I think it works really well from a horse and rider’s point of view in terms of the fact that they are not going too fast the the first time around,” Phillips said. “In the second time around, you’ve got the best horses and riders. That is what makes Arena Eventing so exciting.”

“Arena Eventing fits in well at Devon. The advantage that Devon has is the use of the two arenas. You have more scope there to do more interesting things on the course than you do at [venues that have] a much smaller arena, like in Toronto or New York,” Phillips expressed.

Out of the 25 total jumps, horse and rider pairs will have to navigate 15 standard cross country jumps and 10 show jumps over a 1,000 meter course. Obstacles will be 1.20m in height, and brush fences will be built up to 1.40m and spreads up to 1.60m. Fault penalties will be given for any knockdowns and exceeding the course time limit. Prize money for competitors will be awarded up to 10th place and there is no entry fee.

In addition to the support of Captain Mark Phillips, riders of both disciplines have embraced Devon’s Arena Eventing. Some of these prolific riders include the current coach of the U.S. eventing team, David O’ Connor, Rio Olympians Phillips Dutton and Boyd Martin, and Irish international show jumper Kevin Babington.

The Devon Horse Show and Country Fair is the longest running and largest outdoor multi-breed competition in the United States. With the grandeur of Philadelphia’s prestigious Main Line setting the stage, the event features a world-class field that annually ranks among the most prominent internationally.