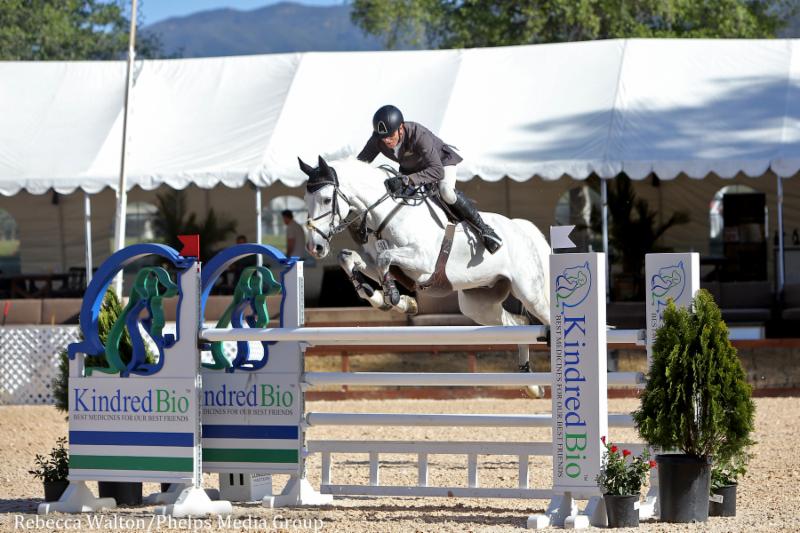 Temecula, Calif. – April 18, 2018 – The hotly anticipated Temecula Valley National Horse Show made its debut Wednesday morning, kicking off the initial day of competition as the largest equestrian event ever held at Galway Downs in its 22-year history. Bjorn Ikast and Classini finished as the big winners of the day in the Grand Prix Arena, taking the lion’s share of the purse in the $5,000 Moon Valley Nursery 1.35m Welcome Stake, while Nicolas Hannes commanded the hunter ring with a collection of wins aboard multiple mounts. A destination horse show for equestrians and locals alike, the day culminated at the “Bright Lights, Vintage Nights!” party, bringing the glitz and glamour from Old Hollywood, Cuba’s Havana Nights and New York City’s Cotton Club to the hills of California.

The promise of prize money brought athletes to the Grand Prix Arena for the $5,000 Moon Valley Nursery 1.35m Welcome Stake, with Anderson Lima’s (BRA) track proving the perfect degree of difficulty for the talented field. Of the original starting order, eight horses and riders advanced to the jump-off, with five leaving all the rails intact over the short course, attempting to beat the clock and climb to the top of the leaderboard.

Keri Potter and Jung Cho’s Diabolical C were the pathfinders during the tiebreaker, clocking in at 35.431 seconds without touching a rail and setting the time to beat. John Perez and Extra Minkus, owned by Daniel Rihan, edged them out as the next to go, breaking the beam at 34.000 seconds.

Their time looked tough to beat, but Ikast saw the opportunity for an inside turn early in the course and left out a stride to the final fence with Classini, owned by BBB Showjumpers. The risk paid off when they blazed through the timers in 31.877 seconds to take home the victory. Mitch Endicott and Ideal De La Hasse, owned by Alex Trubey, were the only other combination to come close to Ikast’s time, stopping the clock in a clear 33.209 seconds to earn the second place prize, while Perez and Potter settled for third and fourth place, respectively.

In the hunter ring, Haness and Saphir, owned by West Coast Equine Partners, LLC, rode to an early lead in the Performance 3’6″ Hunters during the first day of competition, demonstrating their dominance by sweeping first prize in both over fences classes and the hack. Haness continued to rack up subsequent wins in the Green 3’6″ Hunter division aboard another West Coast Equine Partners, LLC mount, Kumano, riding to the top score in one of the over fences classes in addition to the under saddle phase. As the clear front runner after day one, Haness will aim to maintain his status atop the judge’s card Thursday to clinch the tricolor.

The inaugural day of the Temecula Valley National Horse Show was capped by the “Bright Lights, Vintage Nights!” party held at The Village at Galway Downs. Boasting world-class entertainers Skye Dee Miles, Malik Pointer, Tru Collins and Aaron Turner as headliners, in addition to Vegas Showgirls and an all-star band, the exclusive affair transformed The Village into a modern supper club inspired by social clubs of the past for the horse show’s festive welcome party. The intimate and spontaneous performances featured a twist of old and new cabaret, with music from every genre and era, complemented by a gourmet spread of cuisine and specialty cocktails.

Hunter/jumper competition will continue at Galway Downs Thursday, as the second day of the Temecula Valley National Horse show will see the first batch of champions crowned in their respective divisions. The evening’s highlight event will draw jumper competitors to the Grand Prix Arena for a shot at the prize money in the $20,000 Oakmont Ranch 1.40 – 1.45m Speed Classic.

“I bought him myself in Europe as a 6-year-old. He has grown up and he’s just starting in the grand prix classes now. He’s a 9-year-old gelding, he’s still learning a little bit but he’s super brave and composed. Today, I took a big chance in the jump off. We took fence three very sharp, I think I was the only one to go inside there, and I think that was enough to have the victory and then I left a stride out to the last. It’s a beautiful horse, a nice coming horse for the future.”

“I love it, Ali has put on a great show here. We came out here to try the footing 10 days ago and it’s just spectacular footing. Ali is very professional and put a lot of work into this. It’s a place that will rise from year to year in the details. What a setting it is and what a view you have from here! I feel like I’m in Europe riding again because that’s what the view looks like. They have everything you are looking for – good footing, jumps, good courses and prize money. I think that this show is going to take off. I will definitely support it, it’s really nice. Good service for the rider – you see the rider’s lounge and other great things for the riders. I think this will be a success!”

On Saphir and Kumano:

“Saphir is a pretty seasoned horse. I have been showing him for four or five years now. I don’t think I’ve ever shown him at a different horse show – we always do either Thermal, The Oaks, Del Mar or Showpark, and we generally just rotate those shows in California. This is the first time we have been to a new venue with him in five years, so it’s fun to be in a different place. He’s a very nice horse; he has been Horse of the Year several times. He does the Amateur-Owner divisions as well with his owners. Kumano is also owned by West Coast Equine Partners. He was really good here today. I think he liked the new views and the new jumps.”

On his opinion of the horse show so far:

“For me, I am biased because I live in Temecula, so I am super excited that the horse show is here now and so close to home and my farm. I’m really enjoying the new atmosphere. I think they are trying to make it into something special. The prizes have been really nice, and they are putting some great effort into making exhibitors happy. I think that this venue has a lot. Horses like it here, and there is a lot of space for them. It’s nice to support new horse shows, and the timing was right for us. We wanted to check it out and see what it’s all about, and we will be coming back to compete in the second and third weeks in May and June. I hope more people see how everyone is liking the show and come to compete in the hunter classes with us.”