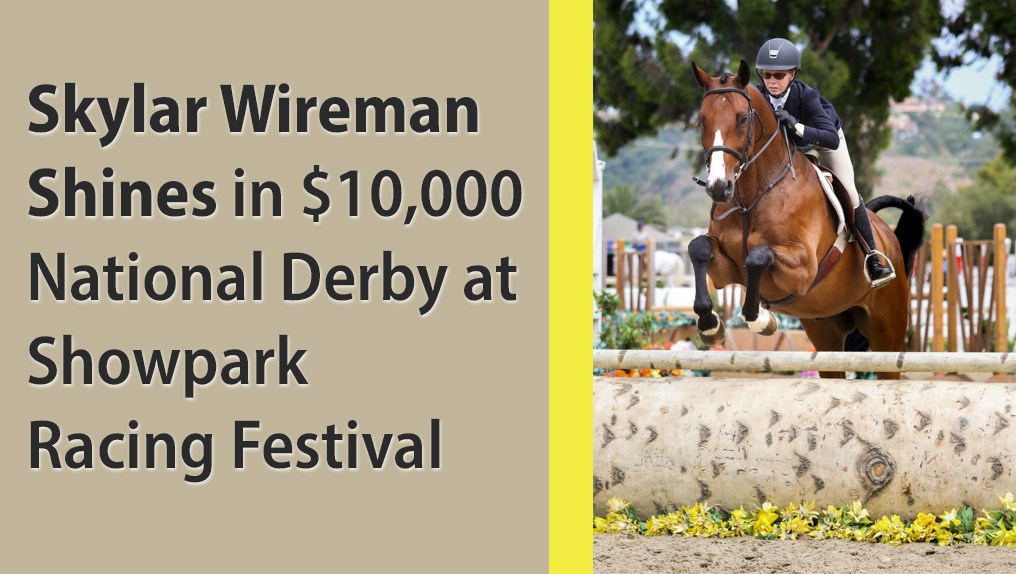 Twelve-year-old Skylar Wireman has been involved in the sport ever since she can remember. “My mom is a trainer, so I pretty much grew up around horses and loved them from the beginning. I did my first walk-trot class when I was 4! I have always had a passion for loving and kind horses. I would spend all day on a horse if I could,” she said of her upbringing. Wireman especially enjoys catch riding and working with green ponies.

The derby courses allowed the riders to choose how they rode the first course. “The first round had lots of open bending tracks where you could choose to add or flow forward depending on your horse. My horse has a big step and is very brave so I took the more forward options.” The second round gave riders a chance to show off their handy skills. “The handy had lots of options,” said Wireman, “In the handy we did all of the inside turns except one very risky turn off of a stout oxer.”

Wireman rode Shayne Wireman’s Captivated, known as Captain in the barn. Captain is a nine-year-old Westphalian gelding. “My favorite thing about him is when he begs for treats, he twists his head sideways and scans everybody nearby him!”

The Plaid Horse Highest scoring junior award highlights the accomplishments of junior riders in a field that’s usually topped by professionals. “I had no idea that there was an award for the high scoring junior, but when they told me, I was thrilled,” Wireman said about the prize. She sees the importance of her accomplishment. “This type of award is great because it is hard for Juniors to beat top professionals like John French, but it rewards the Juniors even if they aren’t among the top of the leaderboard.”

Wireman was the only junior to make it to the second round and place in the top twelve. “It was an honor to be lined up with all the pros and to be recognized by The Plaid Horse and have my photo taken!”

Wireman and Captain also won their section of 3’3″ Junior Hunter Finals the same weekend. They are focused on Medal finals for the remainder of the year, already picking up a ninth place finish in the CPHA Foundation 14 and under. Wireman plans to continue to do a couple more National Hunter Derbies.